If you’re searching for some great Halloween names for black cats, we’ve got a treat for you!

Halloween and black cats go together like bread and butter.

Throughout the years, black cats have been the subject of several myths and superstitions.

However, the fact is that black cats are no different than white cats, brown cats, orange cats, or any other color of cats.

If you have just welcomed a black kitten or cat into your family and Halloween happens to be one of your favorite holidays or you just want your cat to have a Halloween-themed name, here are some awesome names for you to consider.

Related: 20 Sweet Cat Names from Movies to Inspire You 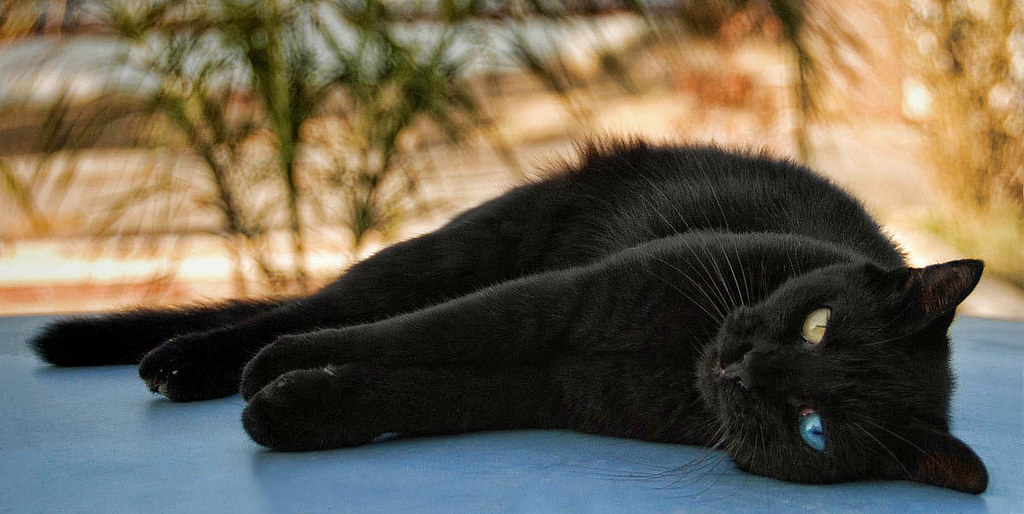 Along with these fabulous Halloween names for black cats, I’ve sprinkled in some of my absolute favorite black kitty pictures! I really miss my own black cat, who passed away a few years ago.

Sadly, we can’t get another one for a little while because my dog is a bit too rambunctious with kitties. She’s okay with the older cats in my house, but she loves kittens a little too much. Someday, though…when the time comes, I’ll be ready with these awesome names!

was an Irish author who was most famous for his 1897 novel- Dracula. (I don’t know about you, but I think Bram is such a cool cat or kitten name).

Bear with me for a moment, because I know that you’re thinking “Casper is a ghost, better suited for an all-white cat!” I happen to love ironic names, though, which is why I think Casper is a darling (and wittty) name for a black kitty!

Cobweb is from Shakespearean origin meaning- a fairy. A cobweb, also known as a spider’s web, is built by spiders, using up to 6 different types of silk. Cobwebs are popular when it comes to Halloween decorations

. (I think Cobweb is a cute name for a black cat or kitten. It sure beats the name spider’s web, don’t you think)?

Craven is from English origin meaning- garlic place. (Where in the world did someone come up with the origin- garlic place)? Anyways, Wes Craven is synonymous with Halloween. He was an actor, director, producer and writer, most known for his work in horror films. He is probably best known for starting the horror franchise- A Nightmare on Elm Street

and for directing all 4 movies in the Scream film franchise

I feel kind of bad for this name, because it really is fabulous. However, the movie The Omen

kind of ruined it for a long time, but it’s making a come back. Damien actually means “tame,” making it a great name for a former feral black cat!

It really doesn’t get any spookier than Dracula, does it? Dracula has made his appearance in numerous films throughout the years, most notably the 1931- Dracula

with Bela Lugosi, the 1958- Dracula with Christopher Lee and the 1992- Bram Stoker’s Dracula

FYI, the cat pictured above is actually named Mingus, and yes, his teeth are really that long. He also has a super long tale from what I can see in his pictures.  He’s an internet superstar! I came across his picture on Facebook and fell in love.Check out his Instagram account.

Do you remember the monster breakfast cereals from General Mills? They came out in 1971 and are distributed each year around Halloween. There were 3 monster cereals- Boo Berry

. (Which one was your favorite? I liked all 3 of them, honestly so it’s hard to pick just one).

Think October is a weird name for a cat? I, personally, think it is adorable. As you know, Halloween falls on the last day (31st) of October each year.

And while we are on the topic of cats, did you know that, in the United Kingdom, October 27th is Black Cat Appreciation Day, in the United States, October 29th is National Cat Day and the whole month of October is International Black Cat Awareness Month? October is a great month to celebrate cats, so it makes a great cat or kitten name.

You know who the Grim Reaper is, right? Chances are, if you’ve been inside (or ped online) any Halloween store, you’ll notice at least 1 Grim Reaper costume

. The Grim Reaper is often referred to as the Angel of Death. He is a skeletal figure who wears a long, flowing, black robe and carries around a scythe.

Salem is from Arabic and Hebrew origins meaning- peace. Have you heard the name Salem Saberhagen

before? Well, if you were one of the television viewers of Sabrina the Teenage Witch

Salem Saberhagen is a 500-year-old witch who must spend 100 years as a cat, as punishment for his attempts at world domination.

Autumn is from English origin meaning- the fall season. Halloween occurs during the autumn season, which runs from September 21st through December 21st. (Yes, I know the color autumn is nowhere near the color black, but we are talking about the season and I think it is a sweet name for a female cat or kitten).

This one comes from the movie The Blair Witch Project

, one of the most unique horror movies of my generation. At the time, the handheld cam thing was cutting edge. Now, everyone is doing it! While I thought the film was a bit overrated (it made me super motion sick!), I do think it’s a great Halloween name for a female black cat!

Circe is from Greek origin meaning- bird. In Greek mythology, Circe is the goddess of magic. She can also be an enchantress, nymph, sorceress or witch. (Circe has to be one of my favorite names for a female cat or kitten. It is unique and works great for cats or kittens who are black in color, since magic (especially black magic) is often associated with Halloween.

Lilith is from Assyrian origin meaning- ghost, night monster. Do you watch the television series- Supernatural

? In seasons 3 and 4 of the series, Lilith is a powerful, white-eyed demon. The name pops up in numerous other movies, shows and books. In the show True Blood

, she’s the mother of all vampires, for example.

Luna is from Latin origin meaning- moon. Luna Lovegood (how cool is that name?) is a quirky witch in the Harry Potter series

. She is a student at Hogwarts and a member of Ravenclaw House.

Morticia is from Latin origin meaning- death. I know what you’re thinking- who in the world would name their precious cat or kitten a name that means death, right? Well, that is true but Morticia is just the absolute coolest name. I say that because I am a huge fan of The Addams Family

The name Piper is inspired by the show Charmed (the original, accept no imitation version). We went through a phase where all of our cats were named after TV witches. We also had a Prue, but our black cat was named Piper. The meaning of the name is, quite simply, piper, as in someone who plays the pipes. Yeah, I know, kind of obvious! This is one of my all-time favorite Halloween names for black cats, though.

Raven birds have been part of the Halloween tradition for many, many years now. In the world of witchcraft, ravens are said to be the companions of witches, helping them with magic, especially black magic.

Tilly is from German origin meaning- mighty in war. Tilly Ipswitch is the Queen of Halloween and the witch from the popular 1969 children’s picture book- Tilly Witch

– by Don Freeman. (Tilly Witch- the name just has a certain ring to it, doesn’t it)?

Narrowing down the list of the cutest Halloween names for black cats wasn’t easy! You can go in so many directions: traditional Halloween themes, horror movie names, autumn-themed names, and so much more.