Curious about cat superstitions by country?

Superstitions have been and will be around for centuries.

In different cultures, a single thing can have different meanings and interpretations.

Cats are not an exception to this rule and they are viewed differently in some culture.

They may bring bad luck or fortunes, but we will see that below.

You may also like: 14 Super Cute Black Cats You Need To See Right Now

Cat Superstitions Around the World

From from white to black cats bringing good luck to bad, the world has some very interesting cat superstitions!

Take a look at some of the most intriguing!

In the Celtic culture, cats born on May 1st become troublesome and mischievous. It is believed that they will bring snakes into the owner’s home.

The Chinese culture believes that cats can see ghost and protect their people from them.

In Ancient Egypt, cats were divinized. They were some of the most important creatures and often assigned to Hathos, the goddess who could take a lion form.

After death, the cats were mummified, buried and mourned, like their emperors.

English people believe that by having a black cat in your house, you will have luck in your love life. They are a sign of good luck.

In ancient times, the Finns believed that cats guided the dead to the afterlife.

The French also believe that black cats bring luck to all who feed them and treat them well.

This black cat with magical properties is called a “matagot.”

This is a little macabre, but in Ireland, if you kill a cat, you will have seventeen years of bad, bad luck.

If you hear a cat sneezing, then you can consider it a good omen. It will bring you luck and fulfillment in your life.

In Japan, black cats are considered to bring good luck. The elders believe that they can heal sick children and protect them against all evil. 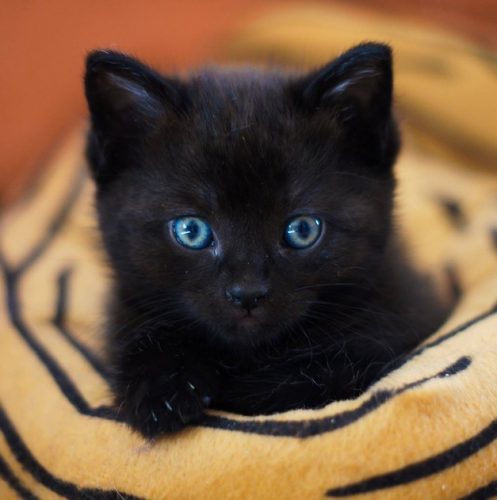 The people of the beautiful island believe that cats may be evil, as the souls of the unburied dead may possess them.

Around cats, the Dutch are careful not to say anything that they wouldn’t want repeated because they believe that cats will “rat” them out!

Norwegians consider cats are fairies with a different form. The legend says that if you look deep inside a cat’s eyes, you will see the fairy world.

If a cat enters your new house first in Russia, then your life will be lucky and fulfilled.

A black cat coming to your house is a sign of prosperity.

A black cat crossing your way is a sign of bad luck, so you should avoid that at all costs.

It’s believed that if a young, unmarried woman steps on a cat’s tail, she won’t get married that year. So, be careful!

There are also entire cultures based on cats and their existence, some thinking they are divine, others believe they will bring a world of chaos.

Of course, different cultures and traditions will have different opinions.

Some say they should be avoided, others believe that they bring good luck or material gains.

No matter what their reasons are, I think we can agree that cats are amazing creatures, and this list of cat superstitions around the world proves it.