What are the cutest cat breeds in the world?

Since cats come in so many colors and patterns, it’s hard to pick one among all these adorable felines.

But we’ve done our best to compose a list of the planet’s top 10 most adorable kitties.

10 Cutest Cat Breeds in the World

All cats are cute, and even hairless ones are so charming that you can’t tear your eyes from their unique appearance.

But asking a cat lover to pick the most adorable one is like asking a mother to name her favorite child.

That’s why I had a hard time picking just 10 cat breeds to include in our list of the most adorable cats.

I considered appearance, fluffiness, and playfulness to make the final cut.

Don’t take it personally if your cat isn’t among them. I’m sure that they’re just as cute as the cats we’re going to talk about.

Being one of the biggest and fluffiest cats, it’s not a surprise that Maine Coons are at the top of our list.

They’re so cute with their fluffy tails, silky fur, athletic bodies, and big ears that we can’t get enough of these majestic felines.

Besides their adorableness, Maine Coons are excellent companions thanks to their laid-back personality and affectionate nature.

They aren’t needy and like to keep their hunting instincts sharp by playing with toys and puzzles.

While Maine Coon aren’t lap cats, they are friendly to everybody and are highly trainable.

But they can knock stuff down without meaning to due to their size. 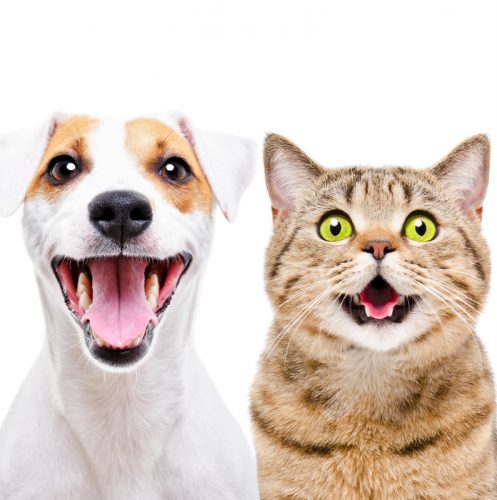 These Are the Absolute Best & Worst Dog Breeds for Cats

Bengal cats might look as if they belong in the jungle, but don’t let appearance mislead you.

This striped breed is a household cat through and through and one of the most affectionate felines in the world.

So, they won’t try to eat you while you sleep!

When it comes to cuteness, nothing could beat a Bengal’s spotted bodies, their curious eyes, and big noses.

They are bound to impress you with their intelligence, excellent climbing abilities, and dog-like personality.

However, Bengal cats are quite energetic and “wild.”

They tend to play rough at times, which has earned them a name as an “aggressive” breed.

Who can resist a Munchkin with their short legs, especially when they sit on their hind legs?

That’s a picture that can brighten anyone’s day.

Compared sometimes to a Dachshund in appearance, Munchkin cats are the result of a natural mutation.

They’re generally healthy, but some could have spinal problems.

As a whole, Munchkin cats are sweet, affectionate, and highly intelligent.

They love to play and run and don’t let their short legs slow them down.

However, they are at a disadvantage when it comes to jumping because they can’t leap as far as other breeds.

Still, they’re more agile than most people expect and find a way to reach any high place they want.

Persian cats have always been one of the most popular breeds, which is not surprising given their appearance.

They fascinate people with their majestic fluff, flat faces, and laid-back personality.

While Persians have an air of royalty around them, they’re affectionate and gentle.

Most Persians love to purr in your lap and enjoy attending your kids’ tea parties.

Furthermore, Persians aren’t demanding and are happy as long as you provide them everything they want.

But ignore them for too long, and you’ll see what a grumpy cat breed they can be.

Persians are also a high-maintenance breed. Their splendid fluffy coat requires a lot of brushing and grooming, or it mats horribly.

Have you ever seen a sad face cat breed and wonder what it is? From all the cat breeds,  the Exotic can have a truly grumpy expression.

That’s what earns them a place in our list of the cutest cat breeds in the world.

A mix between Persian and American Shorthair, the Exotic was created to resemble Persian minus their long hair.

They’re calm felines who prefer a quiet life with as few changes as possible.

In general, an Exotic is happy to entertain themselves while you’re at work and will only pester you for attention if you ignore them too long.

Thanks to this no-care attitude, people often consider them a dumb breed.

But they’re just typical cats that don’t care what you think about them.

Do you know why people call these stunning cats Ragdoll?

They go lump the moment you pick them up and hang in our arms like a rag doll. What could be cuter than that?

Besides being adorable, Ragdolls are highly trainable and get on well with everybody.

Shockingly, Ragdolls come when called and like to retrieve toys.

Moreover, Ragdolls are easy to live with thanks to their easy-going personality and nice manners.

They love to cuddle with you whenever possible and don’t tend to climb high.

You didn’t think we forgot about the Siamese when we’re talking about cute cat breeds or grumpy looking cat breeds, did you?

Siamese cats are famous not only for their cuteness but also for their affectionate nature and pointed colors.

These cats have an opinion about everything, and they aren’t afraid to share it with you all the time.

People often think of Siamese as jealous cats, but that’s because these cuties bond closely with their owner and can become very protective.

Siamese cats are also one of the most intelligent breeds and can learn to do tricks.

They also have adorable grumpy looking faces when they don’t get their way. But that’s one of their many charms.

Look at those folded ears!

While you can look at a Scottish Fold’s ears all day long, they’re not the most adorable thing about this cute shorthair cat breed.

Scottish Folds love to pose in odd positions that can put a smile on anyone’s face.

If that’s not enough, Scottish Fold cats also love to sit on their hind legs like meerkats and observe what’s going on around them.

It’s never boring with them in the house, and you’d better keep the camera close by for some cute Instagram photos.

Do you love the Siamese’s pointed patterns but not their chattiness and bossiness? Then all you need is a Birman.

They’re so adorable that you can’t help falling in love with their striking blue eyes and white paws.

Known as the Sacred cat of Burma, Birman cats are affectionate, calm, and quiet.

They’re people-orientated, so you can expect them to follow you around the house and demand to be part of the action.

They also are excellent companions for children.

While the Birman is docile, they’re smart and curious cats.

They’ve got the knack for getting into hard-to-reach places and might get trapped somewhere if you aren’t careful.

A big nose cat breed that wins you over with their adorableness, Oriental cats are a sight to behold, especially black ones.

They have cute bat-like ears that you can scratch all day, a silky coat, and piercing blue or green eyes.

Since people used Siamese cats to develop Orientals, you should be surprised by an Oriental cat’s intelligence or chattiness.

They bond strongly to their owners and can be quite demanding when they want attention.

Moreover, Oriental cats are highly trainable and love to walk on a leash, unlike other stubborn cat breeds.

They also love to climb and often will take residence at the highest point to observe your actions.

Dogs might be man’s best friend, but cats have a large arsenal of charms they aren’t afraid to use.

All cats take advantage of their cuteness to make you forgive them when they’ve been naughty or to get their ways.

Most owners don’t have it their hearts to refuse a cat anything when they make a sad face or hang upside-down from their cat tree.

But be careful because once you spoil your cat, you might regret it.

What do you think about these 10 cutest cats in the world? Which one is your favorite, and which breed is the cutest according to you? Share your thoughts in the comment section.