16 of the Most Fluffiest Cat Breeds (Perfect Snuggle Buddy) 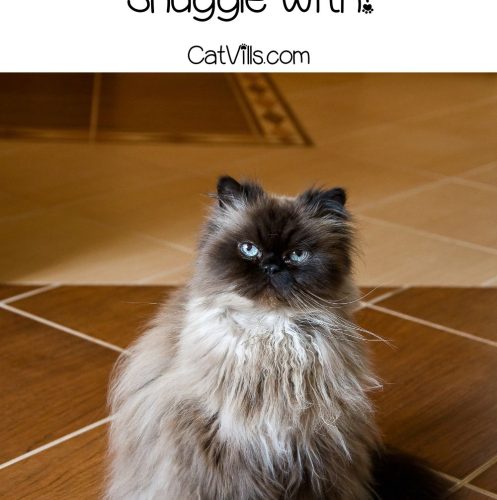 We have to admit, fluffy cats are our favorite.

They are so soft and so cuddly that for a second, you’d think you were snuggling with a stuffed animal.

Fluffy cats make Netflix nights that much better, especially when it’s cold and you want something soft to snuggle with. Plus, they are super photogenic! Here are 16 of the fluffiest cat breeds that you’ll ever see in your life!

How pretty is that fur, let alone those eyes? I’m in love! These cats are pretty well-known for their docile, affectionate nature! They tend to go limp when you hold them, making them the perfect snuggle buddy when you need to rest after a long day’s work.

Ragdolls feature an albinism gene that’s affected by temperature, leading to a point coloration pattern. While there are many shorthaired cats with a similar pattern, point coloration looks very cool on a fluffy coat.

How about their size? They are pretty large, heavily boned, and can weigh up to 20 pounds. While they are known for their docile nature, they still enjoy playing with interactive toys and can be trained to retrieve stuff and play fetch.

The markings on this cat are just beautiful. This kitty is perfect if you live in a colder area. Their top coats actually repel water! Norwegian Forest cats are another large fluffy cat breed with a mane, a muscular body, and a fluffy tail.

If you don’t have elevated areas in your house where they can climb, consider getting them a cat tree. But make sure the cat tree is large enough to handle its size and weight.

This dapper Birman looks so handsome in his bow tie! Did you know that this cat is the “Sacred Cat of Burma”? That’s right. Many folklore stories indicate that the Birman cats were associated with temples in Burma (modern-day Myanmar).

However, other people say Birmans were introduced in France from Asia. Whichever the case, the Birman is another fluffy cat breed with a point coloration. Unlike other pointed cats that have dark paws, Birman cats are identified by their white paws.

While they can be sometimes territorial and jealous when you neglect them, they are not aggressive. They are some of the most affectionate cat breeds that will bond with at least one household member. But make sure you spend time with them and engage them physically and mentally to prevent depression and obesity.

So much fluff! Maine Coon’s are just balls of fur. They’re also one of the oldest domestic breeds in North America and have very keen hunting skills!

Some say these cats originated from France, from some of Marie Antoinette’s cats. And others think they are a crossbreed between a cat and a racoon. While that would explain the bushy tail, that crossbreed is impossible.

Wherever these gentle giants came from, we’re glad they exist. Maine Cons are some of the largest cat breeds, but with the personality of a puppy – they will play around and maintain their high energy into adulthood. However, they aren’t lap cats. But since they are quite heavy, you can just let them stay by your side.

Check: Is Your Cat a Maine Coon Mix?

The true queen of all furry cats. Also called the Shirazi cat, its ancestors date back to around the 1600s! Persian cats are known for their long plush coats and medium-sized build.

But the most recognizable feature is the flat-face, also known as a Peke-face, which was developed through extreme breeding.

However, the original Persian cat had a visible muzzle. While the Peke face is attractive, it exposes these cats to excessive tearing, dental issues, and breathing problems.

Their thick undercoat and issues caused by the Peke face make the Persian a high-maintenance cat.

Just a fuzzy kitty soaking up the sun! Breeders created this breed to be a shorter hair version of the Persian by adding American Shorthairs and Burmese cats to the gene pool.

By the looks of it, it was a success since, besides the short coat, their face, build, and personality is similar to those of the Persian.

However, they tend to be more active than the Persian since they retained some of the characteristics of the American Shorthairs. What you’ll love about the Exotic Shorthairs is they require less maintenance. Their short coat doesn’t matt easily, and they shed less fur than the Persian.

The laziest ball of fluff we’ve ever seen. The Siberian cat is the national cat of Russia! Even the coat characteristics (guard hair, down hair, and awn hair) show that this cat adapted to the region’s climate.

Like the Norwegian Forest Cat, the Siberian has a long double coat, a bushy tail, and a mane around its face. However, despite the long, layered coat, these cats are almost hypoallergenic, making them great for people with allergies.

While they tend to be laid back, they are some of the most muscular cats with enough strength to leap to elevated areas when they need to.

The Somali’s fur may make them look bigger, but they have the same build as the Abyssinians. Like all other fluffy cats, their coat matts easily, and they’ll need daily brushing. They are also quite active and playful, which helps them maintain a healthy weight.

How comfy does this kitty look? This kitty is identical to the Persian, except they have blue eyes. That’s because they are a cross between a Persian cat and a Siamese cat.

As a result, they inherited the fluffy coat of a Persian cat and the point coloration and blue eyes of a Siamese cat. Some may look more like a Siamese with long cat hair, but others still look like Persians.

Either way, they will need the same maintenance routine as that of a Persian. Like the Siamese, the Himalayans are very vocal and social. Some cat owners have also reported Himalayans being moody sometimes. If they act up, just let them be until they cool down.

A little chunky but mostly fluff! Don’t let the name fool you. British Shorthairs can be just as fluffy as longhairs!

Dating back to the first century AD, where they were kept for their hunting skills, British Shorthairs are an ancient breed that has maintained its popularity over the centuries.

Known for their cute folding ears caused by a genetic mutation, Scottish Folds are also one of the most fluffiest cat breeds. They are closely related to the British Shorthairs, which explains the resemblance, but they are a separate breed.

Besides their ears and thick coat, Scottish Folds are also known for their gorgeous folding ears, fun personality, and funny sitting positions that make them subjects in funny memes.

They will enjoy any game you want to engage them in as long as they spend time with you. When it comes to grooming, they need regular grooming, especially along the ears where dirt accumulates.

A native to the Armenian Mountains in Turkey, the Turkish Van is one of the most fluffiest cat breeds featuring a unique Van coloring pattern. The color only appears on the head and tail, while the rest of their body is primarily white.

Turkish Vans have thick fluffy coats in winter, and lighter coats in the summer, an adaptation to the region’s climate. They are also highly intelligent, playful, good jumpers, and very skilled hunters.

As such, they need a lot of interactive toys to keep them busy. Did you know that they are also excellent swimmers, thanks to their waterproof coats?

While they bear the same name as the Turkish Van, the Turkish Angora is different. It doesn’t feature the Van pattern. Instead, their coats are available in a wide variety of colors.

Angoras are also smaller and have a shorter, though fluffy, coat. Turkish Angoras are a typical guard dog for anyone who doesn’t have a dog. They are pretty protective, intelligent, playful, and affectionate.

Ragamuffins are a version of the Ragdoll, even though they are recognized as a breed. They have long, fluffy hairs, a muscular build, and they appear in many colors and patterns.

Like the Ragdoll, they are quite lazy and prefer lying around all day. This makes them ideal indoor cats, especially for people who spend most of their time indoors.

Munchkins have the shortest legs you’ll ever see in the cat world. This characteristic, along with a long spine, results from a dwarfism gene, like the one in humans.

They are also available in both long and short fluffy coats. Better yet, they are fun, cute, active, and cuddly. Whether you want to play or cuddle, these cats will be there for you.

READ MORE: Everything About the Napoleon Cats

Known for being tailless or having a small stub for a tail, the Manx is a unique cat breed originating from the Isle of Man.

While their coat isn’t as long as that of the other cats I’ve mentioned, it’s short, thick, and fluffy. Manx cats are medium-sized cats that are active and good hunters, with their history and documentation dating as back as the 1800s.

Taking Care of a Fluffy Cat

Below are some tips on maintaining a fluffy cat’s well-being.

WHAT CAT BREED IS MOST FLUFFY? 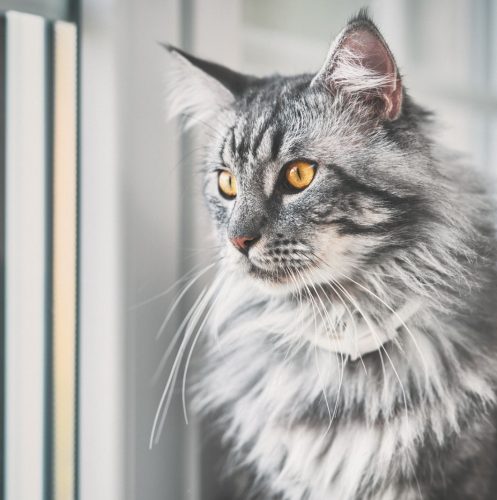 Not exactly. But they are not always easy to find. Out of more than 40 recognized breeds, only 11 exclusively have longhair. A few other cat breeds can have long hair, but not always. Besides, fluffy cats are in high demand, which still makes it difficult to get one.

The undercoat is one of the reasons cats appear fluffy. However, cats have three layers of coats; guard hairs, undercoat, and awn hairs. Some can have all the layers, while others may only have one.

Do you have a fluffy cat? We want to see it! Share your images in the comments below. We may feature it in a future post!

What are your favorite fluffy cats? Please share with us below!