Looking for some fantastic queen names for cats?

There is no doubt that our feline friends hold a special place in our hearts.

So, it is no wonder that we want a great name to represent their personalities.

If you just adopted a female cat, you can choose a queen name among many, many strong female rulers in the history!

Here are some of the most beautiful queen cat names. 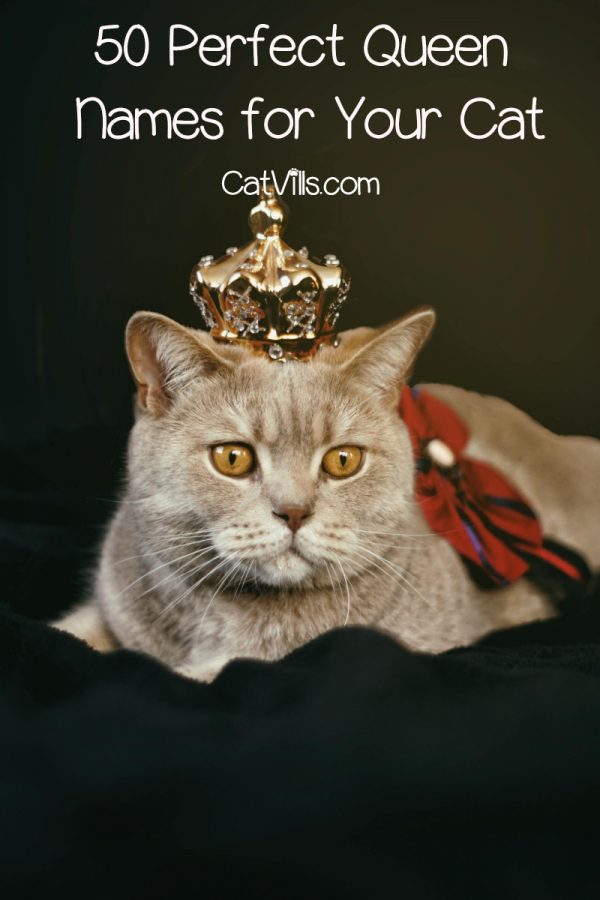 Need some ideas for a boy cat? Check out these perfect male cat names or unique and adorable unisex cat names.

Let’s break this down into queens from different countries, that way you can choose a name that represents your own heritage if you’d like.

Since the United Kingdom had a lot of female rulers, there are many names to choose from. Here are our top picks, along with a bit of background on each.

With names dating back to the times when Vikings ruled most of England, it’s not hard to find a few unique queen names for cats from the British Isles!

I purposely left Mary off this list because, let’s be honest, who wants to name their cat after Bloody Mary?

Ancient Egypt had very powerful female leaders whose names were just as powerful and beautiful.

Cats were very appreciated and worshiped in Egypt. They were a huge part of their culture, so the names of Egyptian queens are very much adequate for the cats.

The Egyptian culture has so many beautiful names, it’s hard to choose a favorite. I really love Ahaneith or Amenia, though! How about your?

In Spain, you were Queen when you ruled, but a consort when you were married to a ruler. Since there were so few female rulers of Spain, our list includes both.

I personally love Isabella or Sophia for a cat name, how about you?

The Roman empire dates back thousands of years, so you can bet that there are tons of queen names to inspire you! It was hard to narrow down the list to just the top 10!

Since I have a cat named Willow, I’d have to pick Willa as my favorite here because it’s super close. I also love the name Tassia for a queen cat!

Queen Names for Cats from Other Cultures

Some other cultures had powerful female leaders, as well. In fact, there are thousands more queens throughout history. Below are our top ten picks!

If you want to go with a queen name to end (or in this case, begin) all queen names for cats, go with Kubaba! She was, after all, the very first that we know of!

A lot of owners want to name their cat after a famous queen or king because usually, they were very strong, smart, powerful leaders of their empires or kingdoms.

You will agree that those characteristics fit most cats.

Do you know of any other perfect queen names for cats? Share it with us in the comment section.

Jelena is an animal lover. She easily gets interested in any topic and can write about anything, but her favorite topics are sports, animals, and wildlife in general. On a daily basis, she has to fight with a strong urge to pet any dog or cat she sees.