Looking for the best cat names from TV shows?

There are many TV shows from the past and present that feature cats as some of the best side or main characters.

Some of them can talk and others act more like a regular cat, but all of them have personalities of their own.

If you are looking for a cat name that is inspired by a TV show, look no further. 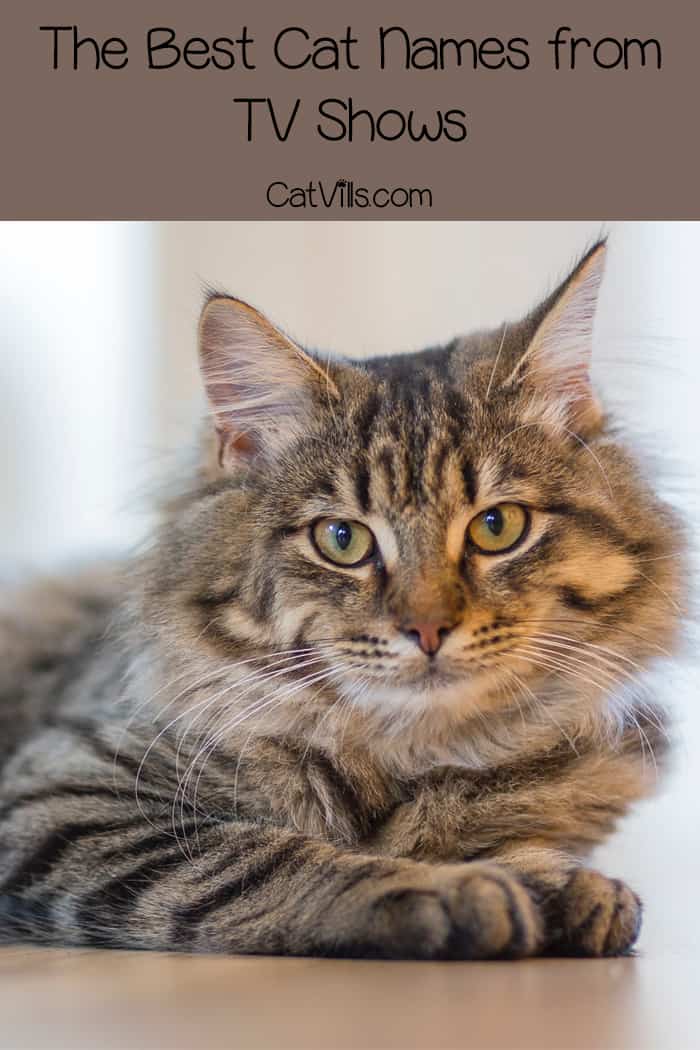 1. Salem from Sabrina the Teenage Witch

Personally, this is one of my favorites on the list and works great if you have a black cat like Salem from Sabrina the Teenage Witch

The snarky cat had some amazing one-liners and everyone who watched the show loved him.

The best part was definitely that he could talk and was always there for Sabrina when she needed him.

2. Garfield from Garfield and Friends

is an animated TV series that was based on the beloved comic about the famous ginger cat.

Garfield is best known for loving a good nap and eating lots of lasagna, which is his absolute favorite dish.

If you have a ginger tabby cat and love the animated character, this could be a good choice.

If you love the show, you have to check out this video of Garfield and Friends characters in real life. Too cute!

This famous black and white cat is well known from the Looney Tunes and famous for his lisp when talking.

Most of the time he was seen chasing after Tweetie, so if you have a little kitten that keeps running around and causing mischief, then this is the perfect name.

4. Snowball from The Simpsons

family have had five cats over the course of the show, and all of them have been called Snowball.

While this name is more suited to a white cat, you will remember that the one from the show is actually black.

However, in my opinion, this name is a better name for a fluffy, white cat.

This is a fun cartoon that most people will have heard of or watched at some point in their life.

The grey and white cat often spends his time chasing after Jerry as he tries to catch him, but we still love him, nonetheless.

6. Felix from Felix the Cat

started off back in the silent film era, famous for his black coat and white eyes with a giant grin.

If you’ve ever seen that cat clock

with the eyes that go back and forth, it’s inspired by Felix!

In fact, his is one of the most recognized characters in animation history, making him the perfect choice to name your new cat after.

7. Fluffy from the Rugrats

This Persian cat appears in several episodes and is always portrayed as being moody and rarely purrs.

However, this is a sweet name that could work for your fluffy kitten.

8. Scratchy from The Simpsons

This name might not sound as appealing as the others on the list, but it is still famous, and a great funny name for a cat.

Scratchy is from the Itchy & Scratchy Show

, a show within a show on the Simpsons.

It is meant to be a parody of Tom & Jerry, albeit a far more violent one than the actual show! It matches the Simpsons’ tone very well!

9. Spot from Star Trek: The Next Generation

Compared to the rest of the cats on this list, Spot isn’t an animated cat.

Instead, she appears on Star Trek: The Next Generation

and belongs to Data, where she often received a lot of attention from the people on board the ship.

Personally, I think this name would be great for a cat that has black marks on their coat.

The Huckleberry Hound Show goes back to the 50s and you may recognize the ginger cat called Mr. Jinks.

He was always trying to be outsmarted by two mice, but you can always drop the ‘Mr’ and just call your cat Jinks.

Some people even spell it as Jinx, which makes it more mystical.

It can be really hard to choose a name for a cat, especially when you want it to mean something to you as well.

This list of cat names from TV shows can help to inspire you and maybe cause you to think of some other imaginative names in the process.

Looking for more ideas? Check out some of these cat names posts you may like:

Do you have any other favorite cat names from TV shows? Share below!