What Does it Mean When Your Cat Winks at You 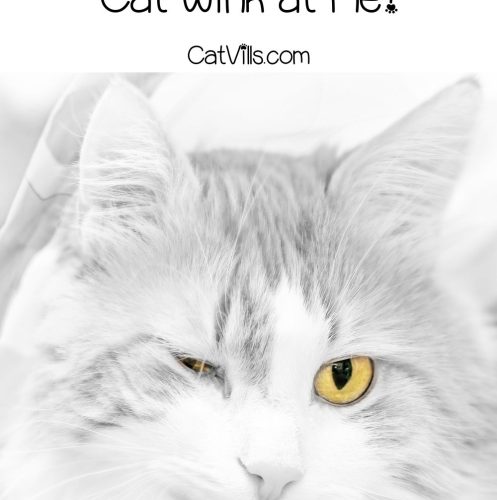 What does it mean when my cat winks at me?

It’s a question many cat owners ask, but unfortunately, there is a lot of information online that amounts to fanciful thinking.

In truth, cat behavior can sometimes be a bit more straightforward than we think.

Join us as we go through the FACTS about why cats wink.

Why Does My Cat Wink At Me And what does it mean?

If we’re going to talk about why cats wink, we need to look at the difference between blinking and winking first. These two words often get used interchangeably.

When discussing humans and when it comes to what our cats are doing with their eyes, we sometimes forget the distinction.

Unfortunately, there is a huge difference between the two and why cats do either.

Winking is when your cat rapidly shuts and opens just one eye. Humans use winking as a way of communicating meaning.

Depending on the context, a wink could be quick reassurance that all is well, or it could be a romantic gesture, a slight bit of flirting.

Why Do Cats Wink?

The reasons why cats wink may surprise you. See, unlike people, cats do not use winking as a form of communication. When a cat winks, it is most likely because they have a foreign body caught in their eye.

It’s likely just a bit of dust or something similar. The winking is a reaction to the irritant, a way to try to expel it.

The majority of animals, other than humans and our close relatives, have a third eyelid called a nictitating membrane. Your furry friend is no exception. This third eyelid adds a layer of protection against injury. When winking, the third eyelid also helps get rid of irritants.

Blinking is when your cat closes both eyes. Blinking is one of the more subtle methods of communication that cats use.

Strangely, whereas humans wink as a form of communication, we generally do not mean to communicate anything when we blink our eyes.

Why Do Cats Blink (Aside From the Obvious Reason)?

The obvious reason why cats blink is the same reason why all mammals do: to refresh and rehydrate our eyes. But what about beyond that?

Many pet owners believe that it is a cat’s way of saying that they love them. The truth is, as with most things related to cat communication, a bit more nuanced.

A lot of the modern domesticated cat’s behavior comes from their wild ancestors. In nature, a cat will blink slowly, or slowly shut their eyes completely, when they trust the animals around them.

The behavior normally involves fellow cats of the same species.

Our domestic cats mean to convey something similar when they wink at us. They are saying that they trust us completely and feel safe and comfortable in our presence.

It’s not quite as emotionally impactful as an “I love you,” but it strongly indicates the kitty equivalent. Fascinatingly, cats seem to interpret the same meaning when humans display the behavior toward them.

For example, if you turn to your cat and slowly blink, they will sometimes respond in kind.

What Does it Mean When My Cat Is Not Blinking?

It is important to note when your cat isn’t blinking at you but making direct eye contact. You could assume that it must mean the opposite of blinking, which is a sign of mistrust or aggression.

However, you might be surprised to learn that your cat could stare with friendly intentions.

Your feline friend will usually stare out of curiosity rather than as a sign of any hostility or mistrust.

If your cat is staring at you but not staring you in the eye, they are probably just amused by the actions of the silly human before them.

On the other hand, if your cat is staring you dead in the eye, they probably want something. It could be food or your attention.

Cats stare when they mean to display aggression, but the behavior depends on additional cues, such as an arched back and raised fur.

READ MORE: Why My Cat Stopped Sleeping With Me?

Cat Winking: Should you be worried?

The occasional wink is no reason to worry. However, if the winking persists, there may be a more serious underlying problem.

For example, if your cat has been blinking continuously for a day or more, they likely have an eye infection.

Most cat eye infections are either fungal or bacterial. If treated early, the infection will usually clear up without causing any serious damage.

However, it’s best to consult your vet for a diagnosis if you suspect your cat has an eye infection.

Prolonged periods of constant winking can also indicate a more serious underlying health concern. Some viruses can cause infection in one or both of a cat’s eyes.

Herpesvirus and other offending viruses are not directly targeting the eye. The infection is just one of many potential symptoms of the virus as it spreads.

It could also mean that your cat has sustained an injury in the eye. It can happen during a fight with another cat. It can also simply happen by accident while your cat is jumping or climbing.

Always consult a vet if you suspect your cat might be suffering from any viral infection or might have an eye injury.

Cat Blinking: Should you be worried?

Usually, there is nothing to worry about if your cat blinks. However, if you notice that your cat is blinking without actually looking at a person or other animal, you should keep an eye on them.

If the blinking is accompanied by cat squinting, there may be an underlying problem.

Just as with winking, your cat may have a bacterial or fungal infection, only in both eyes instead of just one. It could also be a symptom of a viral infection.

As unlikely as it is, your cat could even have gotten injured in both eyes. It can happen during a confrontation with another cat.

There is a lot of speculation when it comes to how cats use their eyes to communicate. That is because cats don’t communicate anything using just their eyes.

Instead, they use their entire body to communicate complex meaning and intent.

A cat staring out of the window while languidly lounging is not communicating the same intent as a cat staring at another cat, face contracted and the fur on their back standing on end.

Rebekah Kuschmider of PetMD writes, “When your cat is relaxed, their pupils will be at their typical size. You may see them let their eyes close halfway as if the cat is about to doze off. They won’t seem watchful or intent.”

A cat’s eyes alone are not enough to discern any exact meaning. However, they can help us understand our feline friends better when considered in context and conjunction with other cues.

We have discussed the way that cats will slowly blink to communicate that they trust their owner. This behavior is generally accompanied by simple body language, usually while lying down.

Resource guarding is usually associated with dogs, but cats have their own, more subtle version.

It is most prevalent in households with more than one cat, but it can happen if your cat spots a neighborhood cat stalking too close for comfort.

A subtle gesture, cats communicate ownership of a resource via an unblinking stare. This stare, along with a slightly dropped head, pitched ears, and a confident stance completes the message.

Any cat parent knows that our feline friends can be pretty aggressive when they feel the need. A harsh or intense stare, accompanied by an arched back and raised fur, can indicate aggression or an attempt to intimidate.

In addition, a cat’s pupils tend to contract to a thin slit during times of heightened emotions.

A happy cat that is going about the business of peaceful relaxation will often have a droopy-looking squint.

The eyelids are lowered but not completely shut. So, a content cat resting but not sleeping will usually have a relaxed look in its eyes while lying down.

WHY IS MY CAT WINKING? 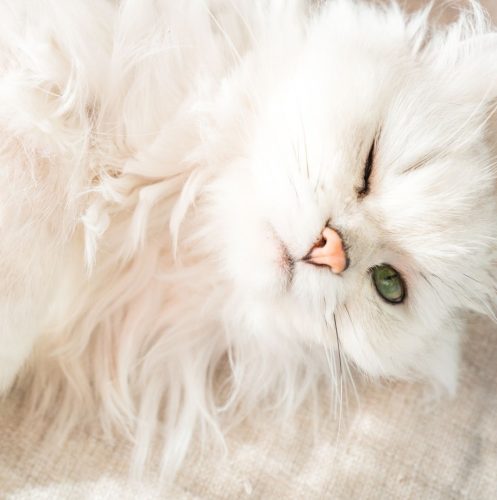 Cats wink when they have an irritant like dust caught in their eye. Unfortunately, it can also be a sign of infection or other health concerns. If winking persists, you should consult your vet.

WHY IS MY CAT BLINKING AT ME?

Cats mostly blink as a form of communication. It is usually a slow and deliberate blink intended to communicate that your cat trusts you and feels completely safe in your presence.

DOES BLINKING MEAN THAT MY CAT LOVES ME?

It isn’t easy to ascertain just what love means to a cat. When they blink at you, your cat communicates trust, and that kind of complete trust likely correlates to some degree of affection. However, blinking is not, as many sources suggest, a so-called kitty kiss.

DO CATS TALK WITH THEIR EYES?

Cats use their eyes to communicate, but the meaning can vary greatly depending on their body language and environment.

Cats blink and wink for very different reasons. Winking can indicate that they have something caught in their eye.

It can also point to an infection or an injury. Cats do not use winking as a form of communication.

Prolonged winking is usually a good reason for a trip to the vet.

Cats use blinking to communicate trust. They use their eyes to communicate various intentions and messages, depending on their body language and environment.

A cat’s stare could mean anything ranging from curiosity to outright aggression, depending on what they are doing.

When trying to understand our cats and what they are trying to communicate, we need to understand the many combinations of physical displays they employ in their body language. We also need to learn to read their environment from their perspective.

Why do cats blink at you? Let us know your opinion in the comments below!

Peter is a cat dad who loves sharing his experience with other cat parents.
FIND HIM ON: FACEBOOK
And LINKEDIN