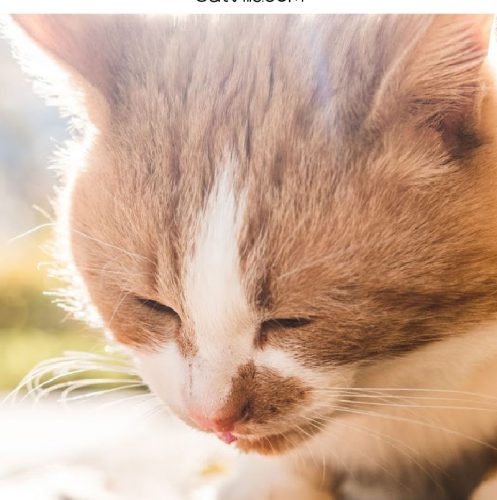 “Why does my cat eat dirt?” is just one of the many bizarre things you never thought you’d be asking when you brought your first cat home.

And yet, no veteran cat owner would bat an eyelid if you brought this up in conversation.

Our loveable little furry friends do all sorts of odd things, and some are far more worrisome than others.

Read on, and we’ll take a look at the potential reasons for this behavior & find out where it should rank on your “freak out meter.”

Why Does Your Cat Eat Dirt?

Many unusual cat behaviors are quite normal and make sense when we take time to look at the world from their perspective.

Much like children, kittens explore the world in several ways. One of which is putting everything in their mouth to taste, chew and even eat.

A kitten eating dirt is likely experimenting with the world around them. They will soon learn that dirt isn’t food.

In older cats, eating dirt and other foreign objects is not normal and can signal that something is up.

Under those circumstances, eating dirt could be a sign that your cat is suffering from pica. Learn more about the signs in the video below.

Pica is an eating disorder where cats, and other species, eat things that have no nutritional value or other benefits.

Vets report that our kitties chew on a wide range of objects.  Cats chew on wood, metal, fabric, and toys, amongst other things.

Mild chewing isn’t a huge deal, but when it becomes an obsession, and your cat is also eating the substance, it can be problematic.

Many things can cause pica; let’s take a look at them now.

What Causes Pica in Cats?

If your cat isn’t getting the nutrients and vitamins she needs from her diet, she may eat dirt in an attempt to make up for it.

So if your cat is eating dirt, it may signify that she is suffering from a mineral deficiency.

Cats suffering from iron deficiency anemia may eat dirt in an attempt to increase their iron intake.

Cat pica can also be associated with feline immunodeficiency virus and feline leukemia.

If your cat doesn’t get enough exercise, stimulation, or enrichment, she may take steps to entertain herself.

Boredom is more likely to result in chewing behavior than your cat eating dirt. However, if she starts chewing stones and plants, she may add dirt to the menu.

Pica is a recognized symptom of stress in cats. Eating foreign objects is one method some cats use in order to overcome their anxiety.

Wool is the most common material eaten by stressed cats, but every cat is different, so it’s important not to rule stress out just because your cat is eating dirt.

A study reports that Siamese and Birman cat breeds are more prone to sucking and chewing wool as kittens.

This behavior is a precursor to pica. While many of the kittens grow out of it, it would suggest that some breeds are more likely to suffer pica than others.

Related: Can Cats Eat Almonds? Is it Safe?

The Dangers of Your Cat Eating Dirt

By this point, you have a better idea of why your cat eats dirt. But now, you’re probably wondering if it could do her any harm.

On the face of it, you might think it’s harmless enough. People often say that kids who grow up swallowing a bit of dirt have more robust immune systems.

But the reality is that eating dirt could do your cat severe harm.

Varying on where you live, the dirt your cat is eating could contain a mixture of pesticides or other toxins.

Unquestionably these chemicals are not meant to be eaten, least of all by your cat.

Your cat could become very ill very quickly if she ingests something that is poisonous to her.

Dirt is full of rocks, roots, clumps, and all sorts of other objects. Each mouthful your cat takes runs the risk of her swallowing something.

Consequently, there is a real risk of your cat choking if she routinely eats dirt.

Generally, your cat is smart enough not to swallow something she may choke on.

Even so, if she is regularly eating dirt, she faces the risk of damaging or breaking her teeth on hard objects like stones.

Every mouthful of dirt your cat eats is going to pass through her body and digestive system.

All of those small, rough, inedible items passing through her could damage her internally.

You do everything you can to keep your cat healthy and give her preventative treatments against parasites.

Nevertheless, if your cat frequently eats dirt, she is at a much higher risk of contracting internal parasites.

How to Stop Your Cat From Eating Dirt

Now we know the risks associated with your cat eating dirt, let’s look at ways to stop her.

The video below gives a good quick overview, then read on for more details.

There are many causes of pica in cats. Of those we’ve looked at today, eating dirt is linked closely to nutritional deficiency and medical problems.

As a result, if our cat eats dirt, get them to a vet for a check-up. They can give you advice on nutrition and look for any underlying problems.

Even after a visit to the vet, your cat may continue eating dirt out of habit.

If your cat is eating dirt from pants inside your home, you could remove the plants or put them in a space your cat doesn’t have access to.

On the other hand, if your cat is eating dirt outdoors, you could keep your kitty indoors.

RECOMMENDED: Why Do Cats Roll in Dirt?

If removing the dirt from the equation isn’t an option, take steps to make it as unattractive as possible.

There are some smells that cats really don’t like that you can use to deter them from visiting an area.

Citrus fruits like orange and lemon are a major turn-off for cats, and they certainly won’t eat dirt that smells of them.

Play With Your Cat

This is more a cure for cats with boredom-linked pica.

Eating dirt is not as likely the result of boredom, but giving your cat plenty of attention never hurts.

Related: Why Does My Cat Eat Spider Webs? (Should You Worry?)

Unless your cat is a kitten exploring the world for the first time, it’s likely she’s suffering from pica if she frequently eats dirt.

Your cat’s diet may not fulfill all of her nutritional needs, or she could be unwell.

In either case, your vet is the best person to give you a specific answer concerning your cat.

Does your cat eat dirt or other things she shouldn’t? Share your story in the comments below.