Why Do Cats Purr All the Time? (7 Reasons You Need to Know!) 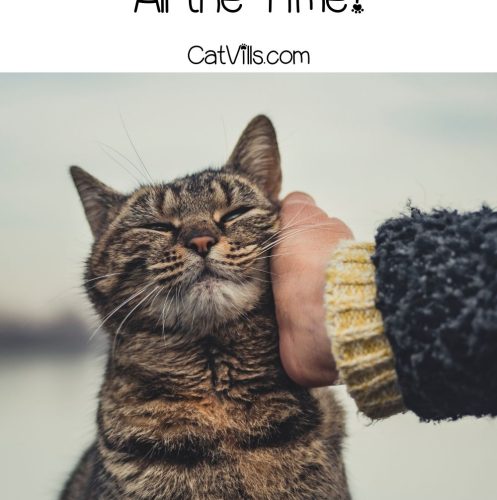 “Why does the cat species purr all the time?“

A cat’s purr is an unanswered question that makes us wonder why our felines purr all the time.

Cats create a wide range of vocal sounds. (1) Among them, the purr stands out.

There has been a lot of research made to explain this body language and what has been discovered is genuinely unique.

I’ve demystified all this below. Find out!

Check: Why Do Cats Rub Against You?

How do Cats Purr?

Pet parents are generally curious why their cats might be purring, and often think, is this a normal purr?

Voice boxes of cats fluctuate depending on their need, or if they are hurt, for example.

Nevertheless, they have quite a set of vocal cords on them, even if it’s a mere sign of contentment.

It is essential to note that even the “how” behind a cat’s purr (2) remains a complex behavior that animal experts are beginning to figure out.

From 2019 though, there seems to be a growing consensus that a cat’s purr involves complex mechanisms that involve their laryngeal muscles and vocal cords as well as diaphragm.

The mechanism is further controlled by the brain and central nervous system signals.

Until recently, there has been very little research done to explore the behavior of cats compared to other more popular pets, like dogs.

During the past years, though, animal experts are beginning to notice the complexities in cat behavior, including vocalization.

This much-missed-out topic is cat purrs, which are often misinterpreted.

Cat purrs were previously believed to be a means of expressing affection and familiarity.

While this generally still holds for most circumstances, researchers have discovered more to cat purrs than just friendly communications.

All these, in combination, result in sound bursts that produce the purring sound that we are all familiar with.

7 Reasons Why Cats Purr All the time

1- A Form of Verbal Affection

On top of the list of reasons behind your furry friend’s frequent purr is affection. This becomes obvious every time you pet your cat or spend some serious cuddle time with him.

When your cat gives those quiet purrs, along with that relaxed pose, be sure that he loves every moment with you.

READ MORE: Why Does My Cat Purr Every Time I Touch Her?

2- Healing from an Injury

Elizabeth Von Muggenthaler et al. suggest in a 2001 study (3)published in The Journal of the Acoustical Society of America that cats purr whenever they need to heal from an injury.

It adds that the purr frequency changes from the usual purr, which cats are used to doing depending on the injury obtained.

Low frequency purring may help build injured muscles in cats, and it may help repair tendons during injury. Call a cat purr some built-in physical therapy in cats.

Cat purring also helps in wound repair. This may explain why cats experience fewer complications after surgeries compared to dogs.

Cats purr to soothe themselves during times when they feel discomfort and unease.

They are their psychologists and therapists. (At least, they don’t need to pay hourly rates whenever some inner struggle and trouble arise…)

This group of researchers further describes this as a “cry within a purr”; a combination of a cry-like high-pitched sound and a usual purr.

In the study, the team notes that cats affect their humans by purring to attract their attention and “appeal to their compassion” whenever they need something, especially food.

They noted that even humans who had no experience with cats were moved to give them food after hearing these solicitation purrs.

Around dinner time, cats may purr close to their dinner bowl.

Yet, removing the high-pitched background purrs while returning them to normal purring sounds did not elicit the same response from humans. (So, yes! Your feline friend is brilliant this way. They know!)

Kittens need to communicate with their moms at birth, and this is where the use of purring kicks in.

Kittens learn to purr as early as a week old. Kittens purr while their mothers nurse them to signal that the milk nursing mothers provide sufficiently for them.

This serves to reassure the mother cat that all is well with her brood.

It’s not only the kittens, though, that purr while the mother nurses them. The mother cat purrs back as a way of reassuring her kittens that both she and they are okay.

Think of this as the cat version of crying in newborn humans.

Purring is a way of showing a sense of familiarity for cats.

When cats purr because of a pleasurable experience with their hoomans, this means that they are beginning to become familiar with both their hoomans and their surroundings as well.

Similarly, purring accompanied by body rubbing in cats means that they are getting familiar with other feline companions within their cluster.

So is purring a normal thing for cats in general? Surprisingly, it seems pretty standard for cats — the tame ones.

It seems that through domestication, cats have learned to produce these sounds to adapt to the home environment to communicate with those around them. And yes, that includes humans.

A paper published in the journal Behavioural Processes in 2011 has shown that feral cats do not have a different vocalization range compared to domesticated cats. (5)

This includes purring, which is a behavior not seen in feral cats.

The paper explains that this is probably because socialization is less seen in feral cats.

This somehow shows that purring is a behavior learned by domesticated cats through socialization, and the surrounding influences this that the cat is in.

Not only are cat purrs a form of cat therapy. They also can be therapeutic for humans too.

A study (6) in 1994 has shown that vocal communications between humans and cats can provide emotional comfort to pet hoomans.

Other studies have also observed a decreased incidence of cardiovascular diseases in human-cat owners compared to non-cat owners.

This may be attributed to the supposed healing property that cat purrs may have.

Feline-assisted therapy for diseases such as depression (anxiety and fear), arthritis, Alzheimer’s disease, AIDS, ADHD, diabetes, multiple sclerosis, cardiovascular disease, and so on.

Due to this, cats are slowly being used in hospices as part of treatment and care.

Also Check: Why is My Cat Purring While Sleeping?

Do cat purrs have healing properties?

Some studies from animal experts show that cats purr to heal themselves. They are, somehow, associated with faster wound healing, as well as bone regeneration and tendon repair.

Do cats purr only when they are happy? 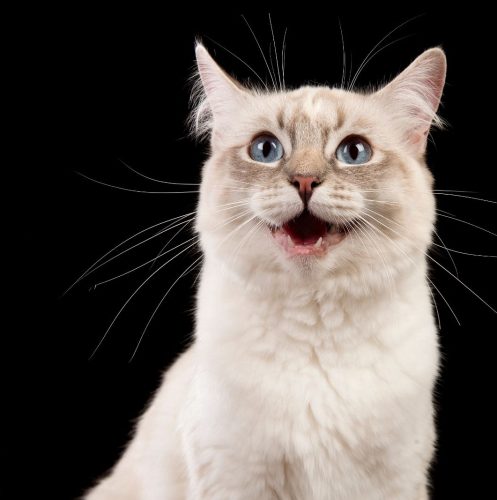 While cats generally purr as a sign of affection, discomfort, and relaxation, there are other reasons why they exhibit this behavior.

How is the purring sound produced?

The purring sound is produced through a complex system that involves the central nervous system, vocal cords, and the diaphragm.

What is a solicitation purr?

A solicitation purr is a term coined to describe the kind of purr that a cat produces whenever it needs something, like treats, from a human.
This is described as a combination of a high-pitched sound that accompanies the usual purr that is meant to elicit a compassionate response from humans.

These are seven great reasons why your cat might be purring. Continuously monitor your cat’s behavior to see if anything else might be wrong.

“Why does my cat not purr?” Is a question that you might ask yourself from time to time as well.

As scientists discover more about this unusual behavior, we might see cats replacing dogs as man’s best friend.

Why do cats purr all the time? Let us know your opinion on this topic below!

Hi, I’m Tamsin. I’m a serious animal lover and dog behaviorist and trainer. In fact, I live on a farm with nine rescues! So, I love writing about and creating awareness around the health and wellness of all animals.

Find her on Linkedin. Read her latest articles. Learn more about Tamsin here