Ear Expression: Why Do Cats Put Down Their Ears?

Why do cats put their ears down when they are scared?
Find out the answer & get cat health tips to help ease your scared kitty! 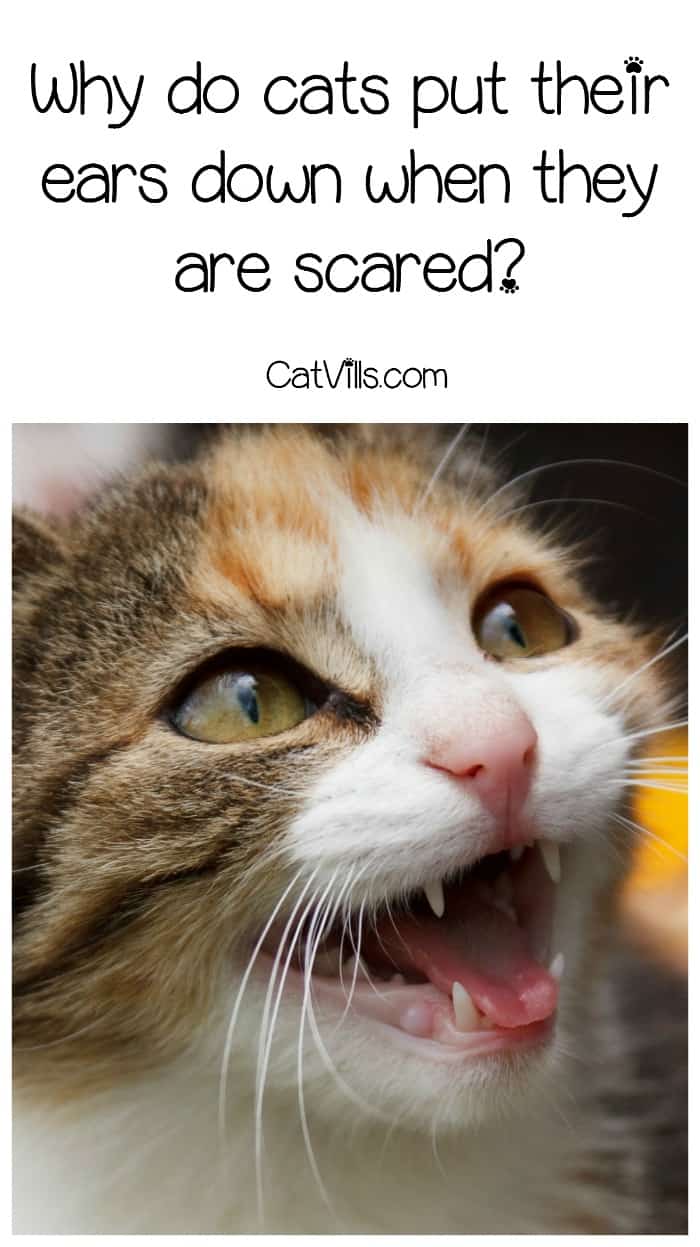 There are many endearing things cats do, but one of their behaviors that fascinates me the most is when they flatten their ears.

It’s always intriguing to me how animals communicate their feelings since we do not share a spoken language, and a very overt sign of how a cat is feeling is when those ears go down.

A cat’s ears are very expressive, partly due to a whopping 32 muscles in each ear (don’t feel bad if you can’t wiggle your ears – you’re only working with 6!).

They also can rotate their ears a full 180 degrees, lending the ears physiologically to being a great form of communication.

Why do cats put their ears down when they’re scared?

When you see their ears go down, it means one of three things: your cat is feeling irritated, scared/nervous, or angry.

If you assess the situation, you can usually figure out pretty quickly which of the three ear-lowering emotions your cat is experiencing, but for a little extra help, read other body language.

The Humane Society of the United States has a great article for more body language insight.

You may be asking yourself if there is a benefit for a cat to her ears lowering when she’s feeling irritated, angry, or scared.

A cat’s hearing is very acute, and that ability I mentioned above to rotate the ears 180 degrees allows a cat to pick up very faint noises from quite far away.

It is highly likely that part of the reason a cat flattens her ears, particularly when she’s angry or scared, is to pick up on any sounds coming from behind her that could signal danger.

She also may lower her ears instinctually to protect them from an attack (a byproduct of her ancestry as a hunter).

Cats’ body language is very nuanced – often it takes observing a combination of several different things to get a good read on how your cat is feeling.

Remember that when your cat’s ears are down, it’s a sign that you should be cautious around him.

Try to help him feel calm, but don’t assert yourself too much – you may end up bitten or scratched.

He will settle down eventually and return to the loving cat you know!

Have you ever noticed your cat flattening his ears when he’s scared? Share your kitty tales below!