Why is Your Cat Growling in Her Sleep? (4 Intriguing Reasons) 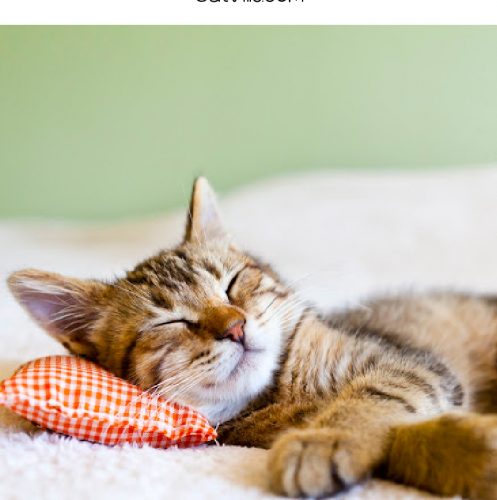 Is your cat growling in her sleep?

Is it just a weird thing some cats do, is it a sign your cat is stressed, or is there something else wrong?

Below,  you’ll discover some of the possible causes of catnap related noises.

Read on, and we’ll get to the bottom of it.

What noises do cats make in their sleep?

What causes cats to growl?

Growling is cat language for, “Leave me alone.” When a cat growls, it could be that she is feeling:

A growling cat is not a happy cat. The person, animal, or thing that got kitty riled up in the first place would do well to give her some space.

Why do cats meow?

When cats meow, they may be trying to say:

Fundamentally, cats meow to communicate. As kittens, they will meow to tell mommy cat they are cold or hungry.

However, adult cats only use it to communicate with humans. They don’t meow at each other. Interesting, right!?

Not a meow per se, but a long, drawn-out howl can indicate your cat is in great distress.

Un-neutered cats make a similar noise to attract a mate.

What about Snoring and Whimpering?

Don’t worry; I haven’t forgotten. We’ll cover those in more detail as we examine why cats make weird noises in their sleep.

In fact, let’s dive into that subject now. If you do want to explore more about why cats meow, though, I love the BBC Earth video below.

READ MORE: Why Do Cats Hiss at Kittens?

Why is your cat growling in her sleep?

Cats make a lot of different noises while they’re asleep.

The reasons below aren’t limited to growling; they are equally as valid for cats meowing in their sleep.

It’s normal for us to humanize the behavior and actions of animals and objects to help us understand them.

So when you see your cat moving or making noises in their sleep, if you’re anything like me, you assume they are dreaming.

Most of us will have experienced someone talking or moving in their sleep due to dreams. Why not cats too?

Human dreams happen during a type of sleep known as REM or rapid eye movement.

During the study, he altered the cats’ brains to switch off a system that stops body movement during REM sleep.

He found that sleeping cats would raise their heads, arch their backs, and behave like they were stalking and fighting.

All this points to the fact that the cats saw something while they slept. Cats growling in their sleep may not like what they see in their dreams.

Check out the video below to learn more about cat dreaming.

Another interesting feline sleep fact is that kittens experience a lot more REM sleep than adults.

Known as activated sleep, kittens will kick, flick, wriggle and make noises as their nervous system and muscles continue to develop.

This is something they grow out of as they reach maturity and is quite common.

ALSO READ: Why is My Cat Shaking?

Your sleeping cat may look like she’s out for the count, but her senses are still working hard, monitoring sounds and smells.

If something starts to bother or annoy her, she may decide to growl as a warning to leave her alone.

It may seem your cat is growling in her sleep, but in reality, she would prefer not to open her eyes and get up.

She hopes the warning is enough to make the problem go away.

Should you worry about your cat snoring?

There are a whole host of triggers for feline snoring.

In any event, snoring alone should not be a cause for immediate concern. It is as normal for a cat to snore as it is a human.

However, feline snoring can indicate health problems that require attention and management. These include:

If your cat is overweight, the excess fatty tissue can restrict her airway and cause her to snore as she sleeps.

This is the most common cause of snoring in cats and humans alike!

If your cat has a cold or another sickness that affects their breathing, it can cause them to snore until they recover.

Asthma can be responsible for snoring in cats. Your cat may require medication to solve the problem.

If your cat has an object stuck in its airway, she will start to snore. Seek help from a vet to clear the blockage.

Some breeds of cats are more prone to snoring due to the shape of their heads.

Brachycephalic breeds (aka flat-faced cats) such as Persians have much flatter, shorter faces, increasing the likelihood they will snore.

If other symptoms, such as having difficulty breathing or gasping for air accompany your cat’s snoring, take them to a vet immediately.

Why do cats twitch in their sleep?

Like humans, cats sometimes twitch, wriggle and make noises when they are dreaming.

It’s perfectly normal during the REM stages of sleep and nothing to worry about.

What do cats dream about?

A study on cat sleep found that dreaming cats would often behave as if they were following or watching something.

With this in mind, we could assume they are dreaming about one of their top hobbies. Hunting!

Dr. Nicholas H. Dodman, a veterinary medicine professor, told the Metro newspaper that cats are likely to dream about things that have happened in their past.

Do cats have nightmares?

If cats can dream, then it’s likely they can have bad dreams about unpleasant experiences too.

Cats can be sound asleep one moment and then take off like a rocket for absolutely no reason the next.

Maybe a nightmare was the cause of this reaction.

It is not normal for cats to sleepwalk. Accepted as common in humans, a study found that cats only sleepwalk if they have a problem with their brain.

So while they are technically capable of it, it is not something they would typically do.

Is it wrong to wake a sleeping cat?

Cats need sleep to help repair their bodies and replenish their energy. This is especially true of kittens.

So it’s best to avoid disturbing their nap time too often if you can help it.

Waking a sleeping cat won’t cause her any harm. But if she wakes with fright, you could be on the receiving end of her claws.

Related: Why Won’t My Cat Sleep on My Bed?

We’ve looked at a variety of reasons why your cat may be growling in her sleep. Or meowing and moving too.

Unless there are any additional symptoms of illness, it’s not something you need to worry about.

Your cat could be having sweet dreams, nightmares, snoring, or being half awake and annoyed by something.

If you have any cause for concern, consult your vet for advice. Otherwise, enjoy the quirky character of your feline companion.

Have you ever caught your cat growling in her sleep? Share your story below!