The Dwelf cat breed is a new breed combining the characteristics of three other cat species to create this new one.

Like the Bambino cat we discussed before, the Dwelf cat is a designer breed, bred specifically for aesthetic and personality rather than for a specific function.

Another hairless, dwarf breed, the Dwelf has a unique appearance and a winning personality that make a perfect combo for anyone who wants a fun, outgoing kitty.

Today, we’ll be talking all about this breed including its appearance, personality, health care needs, and grooming needs. 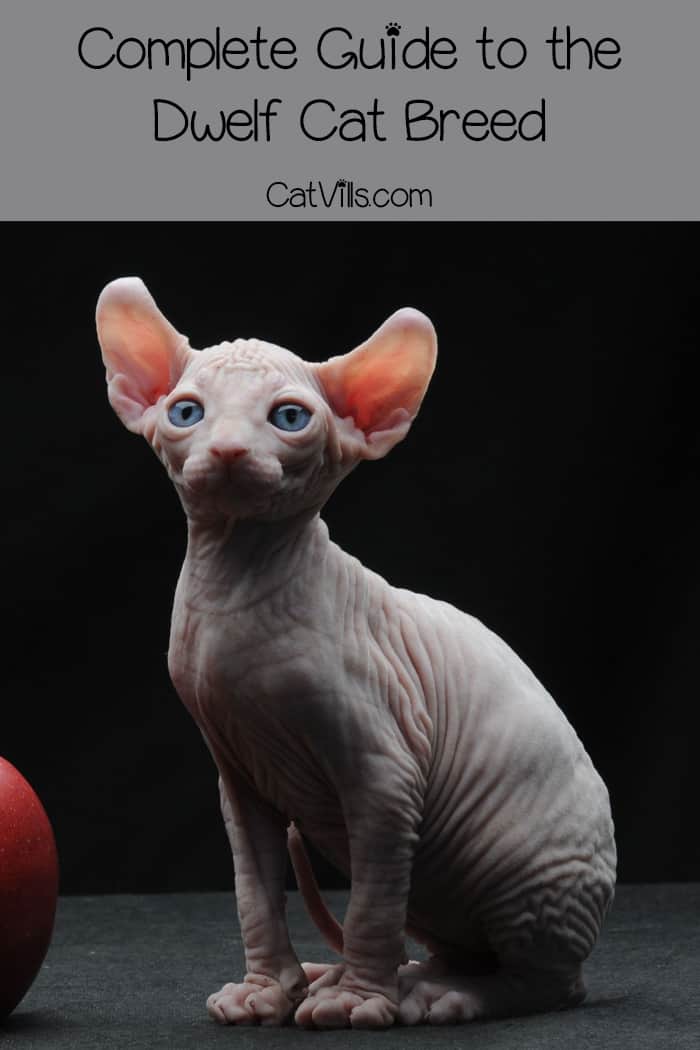 Known as a designer breed, the Dwelf is a cat that owes its unique look to the Munchkin, Sphynx, and American Curl.

These three breeds were used as the foundation of the Dwelf, and give this dwarf cat breed its short legs, curled ears, and lack of hair

The breed is so new, in fact, that it is vitally important to find a reputable breeder because the jury is still out on if this breed will have skeletal problems due to its frame.

The Dwelf is an entertaining little cat with lots of spunk and a unique look. Its breeding history makes for an unmistakable appearance as a well as a truly charming personality.

The Dwelf is a small, stocky cat with a well-rounded abdomen, curled ears, no hair, and a head that shows its Sphynx heritage.

Perhaps the most distinguishing feature of all in these cats is their lack of hair. Although they are almost always completely hairless, they can have a covering of very find, short downy hair.

The lack of hair helps show off their highly desirable wrinkles at the legs, shoulders, and forehead.

Being a dwarf cat, this breed is obviously small. In fact, many adults weigh in at about half the weight of their normal-sized counterparts.

Curious about Bambino Cat Breeds? Our guide will enlighten you.

Often described as having a dog-like personality, the Dwelf has a personality far bigger than its size.

Speaking of shenanigans, due to their higher than average intelligence and high energy, this breed needs lots of play time and mental stimulation to keep them healthy and happy.

When picking a cat breed, it’s important to know all about its health needs and care, so let’s take a look at those and how they pertain to this particular breed.

As of now, the Dwelf appears to be a hardy, robust breed.

Although, this appearance should be tempered by the fact that it is a very new breed, and as such, there hasn’t been enough time or research to determine all the potential health problems this breed may have.

That being said, it is a dwarf breed, so there are two major issues to look out for.

One other issue of note is Hypertrophic Cardiomyopathy (HCM). Although this has not been seen in the Dwelf as yet, it is a common problem of the Sphynx.

Because the Sphynx is one of the three major contributing breeds to the Dwelf, it’s worth watching out for.

As with other hairless cats, the Dwelf requires a high-calorie diet to help it regulate its body temperature.

There is no data on life expectancy at this time, as the breed is so new. However, we can estimate a lifespan of between 9 and 15 years based off of the breeds used to create it.

Although hairless, the Dwelf requires regular grooming. Weekly or bi-weekly baths are crucial to the Dwelf’s well-being.

Without a hair coat to naturally wick away its skin oil, the Dwelf can become greasy and sticky feeling and may even develop skin problems.

However, with regular bathing using water and a mild aloe and oatmeal shampoo, skin conditions should never be an issue.

A Unique Friend with the Dwelf Cat

The Dwelf cat may be a new breed, but it has all the classic characteristics people love in a cat – and then some.

With its high intelligence, loving nature, and energetic personality, the Dwelf cat is a breed that fits into almost any lifestyle.

Do you have a Dwelf cat? Share your thoughts below!