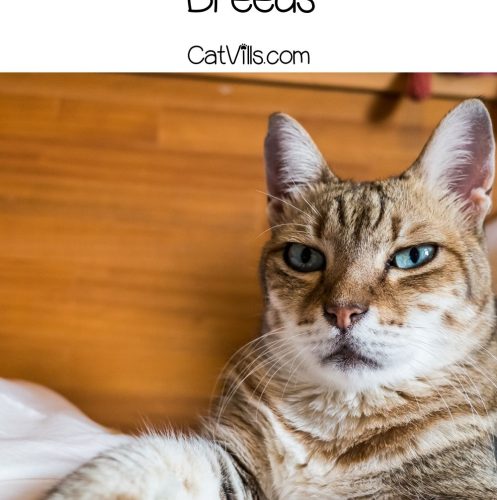 We’ve talked about the most vocal kitties in the past, but what about the LEAST talkative cat breeds.

There comes a time when you need some silence in the house.

You may be studying, meditating, or even living in an apartment with thin walls and neighbors who hate the sounds of a cat meowing.

If that’s the case, keep reading to see which breeds [1] will best fit your quiet lifestyle!

What cats are quiet? These are the least talkative breeds!

Nor does it mean that these kitties are incapable of communicating with us at all.

Cats with this trait often communicate with other forms of body language, such as nudging and cuddling.

Let’s take a look at some quiet cat breeds [2].

Known for their mischievous look and folding ears, the Scottish Fold cats are some of the quietest breeds.

They are a very laid-back breed that sometimes lies on its back. And they rarely make loud purrs or meows, even when they’re upset.

Russian Blue cats are famous for their dense bluish-grey coat.

They are also preferred by cat owners who are allergic to dander since they don’t shed a lot of it.

And while some cat breeds make loud, consistent meows when they’re hungry, the Russian Blue will only give you a nudge.

That’s how quiet they are. They also tend to be a little shy, especially in the presence of strangers.

The British Shorthairs have an aloof personality towards strangers, but that doesn’t mean they’re anti-social.

They’re friendly to their owners, and they’re famous for their “calm temperament” and “good-natured” appearance.

Check This: Do British Shorthair Cats Meow a Lot?

Something about this cat’s size makes you think it’s one of the most talkative cat breeds.

But Norwegian Forest Cats are quiet, very sociable, and high-energy cats. They make good family pets, and you can engage them in various pet games.

However, they are sometimes afraid of high-energy pets, such as dogs, and wouldn’t do well around them.

Judging by the looks, the Cornish Rex looks like a nagging vocal cat.

This is because he’s a hairless cat, and he features an unusually long neck and a curly coat. Some people even refer to them as aliens.

But deep down, they’re sweet, playful, child-friendly, and less vocal.

And unlike the Russian Blue, they will not hide when you have friends over.

If you’re in love with the pointed-color coat of the Siamese but don’t want a cat that talks all day long, the Birman is a perfect choice.

Unlike Siamese, the Birman has a soft meow, which it uses only to remind you to fill the bowls, pet their majestic fluff, or provide cuddles.

These cats are so quiet that you won’t even notice it when they follow you around the house all day long.

However, don’t confuse docile with dumb. The Birman is an intelligent breed and needs plenty of attention and physical/mental stimulation to thrive.

But these cats like it when you hold them and are a good choice for families with children and other pets.

Many cat owners describe their Exotic Shorthair as lazy, quiet, and calm. And they aren’t wrong.

The Exotic Shorthair is a docile breed with a sweet temperament, low energy levels, and soft, musical voices. They aren’t big talkers and are capable of entertaining themselves.

As such, you’ll rarely hear the Exotic Shorthair’s pleasant meow unless your kitty is hungry or looking for some extra attention.

Interestingly, you may hear your Exotic Shorthair snoring. These cats have short nasal passages, making them prone to snoring when sleeping.

Are you in love with fluffy cats breeds? Then the Balinese will smite you with its majestic longhaired coat and quiet personality.

It’s no coincidence that the Balinese cats look like fluffy Siamese. They’re a longhaired variety of the Siamese due to natural mutation or a mix between other longhaired breeds.

While the Balinese share many similarities with their Siamese parent, they aren’t so chatty and bossy. Still, you can expect your Balinese to “talk” to you during the day.

Look at this fluffy coat, large ears, and magnificent tail! The Somali is a longhaired version of the Abyssinian cat breed, impressing us with its mischievous personality, affectionate nature, and adventurous spirit.

In general, when Somali cats have anything to say, they talk in a soft, gentle voice. But they aren’t one of these breeds that will talk your ear off.

Still, the Somali cat is a high-energy breed – climbing as high as possible, running, jumping, and playing around the house with an endless supply of energy.

Moreover, the Somali is very persistent when it wants attention and requires a lot of mental and physical stimulation to prevent destructive behavior.

It might not meow a lot, but the Somali will keep you on your toes all day long.

Siberian cats are one of the largest breeds, with a weight of up to 17 pounds and a length of 25 inches. It’s easy to imagine these majestic animals as talkative and demanding felines, but the truth will surprise you.

The Siberian is a gentle cat – playful, affectionate, and calm – with a pleasant chirping voice. It’s not shy, greeting strangers and families with equal curiosity and affection.

In general, the Siberian will love to tell you about its day when you come home from work. But they aren’t overall very talkative and won’t bother you too much if you’re busy.

Moreover, the Siberian’s calm disposition and soft purr make it an excellent choice for a therapy animal.

Do you know why people call these color-pointed cats Ragdoll? Pick one in your arms, and they go as limp as dolls!

Besides an affectionate nature, Ragdolls are one of the quietest cats you can ever own, being vocal only when you forget to pick them up in your arms.

Moreover, Ragdolls are brilliant cats – you can teach them to fetch, walk on a leash, or open doors.

Ask most cat owners, and they’ll tell you that Persian cats are so lazy you can mistake them for a fluffy piece of furniture. They aren’t far off from the truth.

Persians are really one of the laziest cat breeds. They’re very low active, and you can leave them home alone without worrying about destroyed furniture and ruined drapes.

Moreover, Persians are content to observe your actions without lifting their majestic fluff off the couch and will chirp only when you forget about the food bowl.

Abyssinians cats are a sight to behold with their large ears, expressive eyes, and spotted bodies. It’s easy to imagine these majestic cats meowing all day long.

In a sense, the Abyssinian is a quiet cat. It won’t screech for food if you’re one minute late with their meal and won’t “talk” non-stop when you’re home.

However, the Aby cat isn’t a quiet (calm) cat. These cats live their lives to the fullest – jumping, running, and climbing until they drop off from exhaustion.

So, you can expect to hear the sounds of an active feline creating mischief all day long.

It’s impossible not to recognize the adorable American Curl with their unique ears and cute facial expressions.

While people call the American Curls “Peter Pan” because of their tendency to fly around the house, these cute cats aren’t big talkers.

They’re content to watch what you’re doing and follow you around the house without being too bossy. But they’re very smart and can learn to open doors with ease.

If you’re looking for a cat with a timid voice for an apartment, you won’t be disappointed with the Singapura. You’re quickly going to fall in love with its saucer-like eyes and oversized ears.

While the Singapura is one of the smallest cats in the world, it has a big personality and is playful, mischievous, and very affectionate towards its owners.

However, it’s not a bossy cat and won’t bother you too much as long as you provide plenty of cuddles.

Why do cats meow?

Meowing is a cat’s mode of communication, just like humans talk to each other.

According to some scientists, cats developed meowing just to communicate with humans.

They’ll meow when they need your attention when they’re hungry, need water, or when something’s wrong.

However, as they age, cats don’t always communicate with each other with meowing. Instead, they use touch, scent, or any other body language.

It’s the cat parents’ job to understand different cat vocalizations and what they mean. [3]

This will help them identify what the cat needs at any given time.

Check out this video to learn more.

Why does my cat have a quiet meow?

One of these feline companions’ most attractive sounds is the quiet meow, also known as the silent meow.

You’ll see them open their mouth, close their eyes, and make the facial expressions that accompany a meow, but you won’t hear any sound.

Even though it’s called a silent meow, it’s not exactly silent. It’s a soft voice at frequencies (50 to 60 kHz) that only cats and some dogs can hear.

Humans are capable of hearing at frequencies ranging from 18 to 20 kHz. So what does your feline friend need when he/she lets out a quiet meow?

There’s no definitive way to identify why exactly your cat has a silent meow, so you need to try different things.

For instance, if your cat loves being outdoors, you can try to let them out. If they’ve had a long day, you’ll know they need to sleep.

And if it’s hours since they had food, then it’s time to feed them.

As you build a relationship with your cat, it will be easier to discern what they need based on the differences in vocalizations.

Are there cats that don’t meow?

Cats should meow from time to time, even the quiet cat breeds.

The silent meow I just mentioned happens occasionally, and it’s often a substitute for the usual meow.

For quiet cat breeds, it’s normal for them not to meow. But for talkative breeds, there may be an underlying issue that needs to be dealt with.

Can a cat be mute?

Can cats be mute?

It’s very unusual for a cat to be completely mute.

If your cat has lived in the wild for some time, he/she may have learned to be silent since being noisy may have alerted predators.

Cats also become quieter as they age, and sometimes they’re quiet because it’s their nature/personality.

Below are some of the ways to make sure your cat isn’t mute;

A cat can also be mute due to the following medical conditions;

Cats suffering from URI may find it hard to meow. They may also have lethargy, a running nose, and watery eyes.

If your cat has developed growths along the throat, it may find it difficult to vocalize. Coughing, ear infections, and sneezing are other symptoms of these growths.

The Larynx is the part of a cat’s respiratory system where vocal cords are located.

When it gets paralyzed, it could obstruct the airways, change the cat’s meow, or make the cat not vocalize entirely.

These are serious medical conditions. Once you note any of these symptoms, you should consult your vet as soon as possible.

Quiet cats make excellent companions, but that doesn’t mean they have to be mute.

They have to meow sometimes, even if it’s a silent meow.

You can also talk to them to make sure they still have their “sound.”

But if they’re mute and have some of the symptoms of the conditions I just mentioned, it’s best to consult your vet.

What do you think of these least talkative cat breeds? Do you have one of them? Share below!

Peter is a cat dad who loves sharing his experience with other cat parents.
FIND HIM ON: FACEBOOK
And LINKEDIN