Symptoms of a Cat in Heat: Why Your Kitty is Howling Like Crazy

Why is your cat howling and meowing a lot? It could be a symptoms of a cat in heat! Find out what causes this crazy cat behavior! 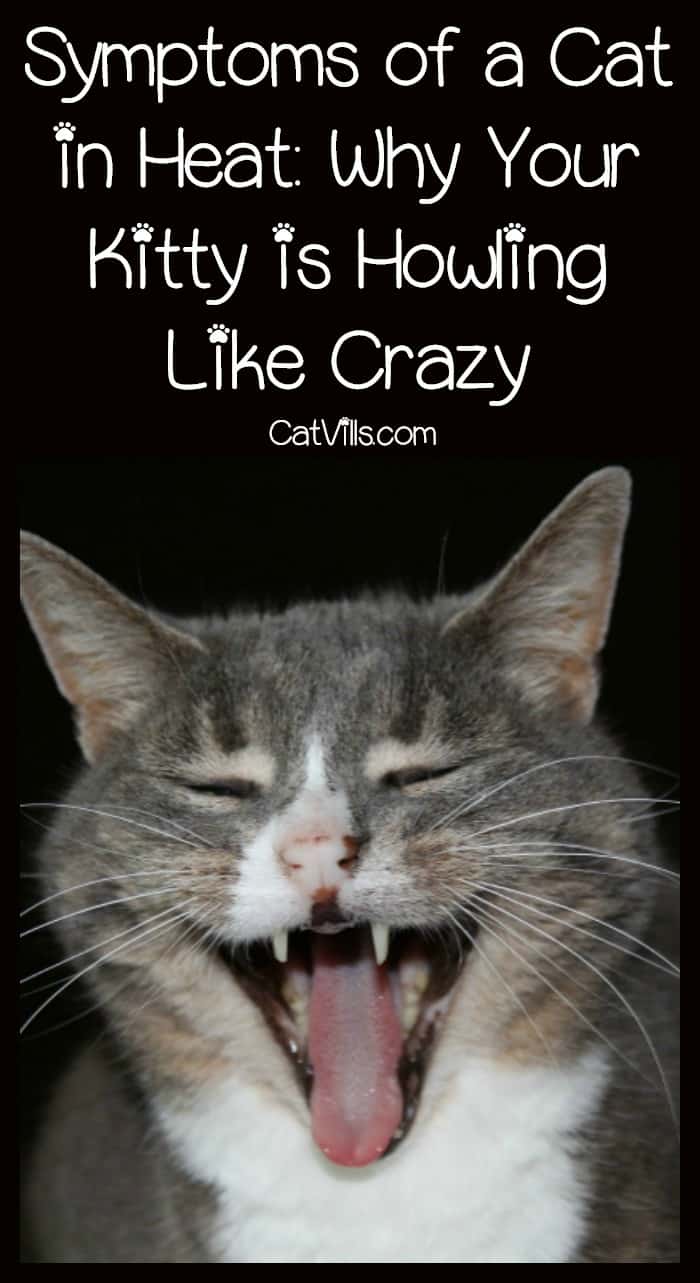 Symptoms of a cat in heat can be confusing for a first time cat owner. When a cat goes into heat, she can act quite unlike the kitty her owner has gotten used to, which can be disconcerting if the owner doesn’t know what’s going on. I recently came across a post of an owner asking why their cat what howling and meowing a lot.

Symptoms of a Cat in Heat

Knowing the symptoms of a heat can help you determine if your cat is sick or just heading into her cycle. One of the first things to note is that cats can go into heat quite early. The person who posted their question about their vocalizing cat said that she was 5 months old. That is not uncommon. So let’s take a look at what to expect when your cat is in her cycle.

This is where some people think that their cat is in distress. When a cat goes into heat she becomes VERY vocal. She will stalk the house mewling and yowling and generally causing an ear-piercing uproar. This is totally normal. She’s not in pain. She’s announcing to any male cat within ear shot that she’s ready to make some kittens.

Excessive facial marking is another of the common symptoms of a cat in heat. Your cat will rub her face on any and everything – including you. You might think she’s being super cuddly, but what she’s actually doing is scent marking you along with everything else in the house to ensure that any male cat in the area can find her.

People who have never seen a cat in heat often mistake this position as just another weird thing a cat does when she’s playing, but the lordosis position is actually the stance she takes for mating with a tomcat. She’ll rest her chest on the ground and stick her rump up into the air, keeping her tail up or over and out of the way of her genitals. This is an innate instinct and can happen at almost any time but scratching the base of her tail can cause her to immediately assume the position. So maybe stick to scratching her ears until it’s over.

When a cat is in heat, you can expect to see a small amount of bleeding from her vaginal area. This is perfectly natural and nothing to be concerned about.

Know the Symptoms of a Cat in Heat

If you have a cat that hasn’t been spayed, it’s important to know the symptoms of a cat in heat. Knowing these symptoms can save you a ton of money on an unnecessary visit to the vet and all the possible tests that might go with it.

That being said, the best course of action for a female cat is to have her spayed either before her first heat or directly after. You won’t find many vets who are eager to spay a cat in heat due to increased blood flow to the uterus.  A spayed cat is far, far less likely to have mammary tumors as she ages, and she is completely protected from a pyometra, which is just a fancy word for an infected uterus. In the long run, spaying is better for her health by leaps and bounds.

Have you ever dealt with these symptoms of a cat in heat? Share your experiences!