4 Reasons Why Your Cat Headbutts You in the Morning 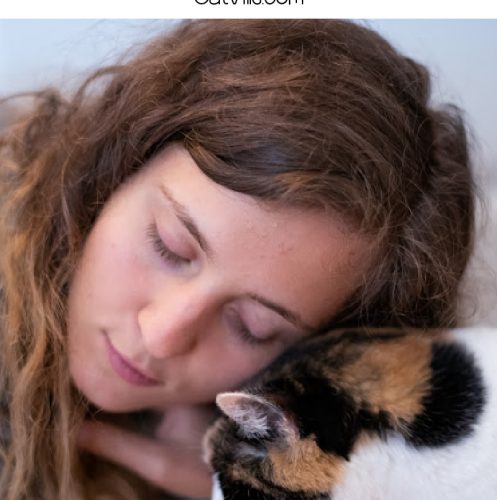 “Why does my cat headbutt me in the morning?”

If you’re wondering what’s behind this funny cat behavior, keep reading for the most likely reasons.

I’ll also highlight the differences between a cat headbutting and head pressing, and give you some tips on how to react when your cat is bunting.

Are you ready? Let’s dive right in!

Why Is My Cat Headbutting Me In The Morning?

First, let’s put any fears you may have to rest; there’s nothing aggressive about those AM headbutting sessions.

For the most part, it’s just your cat’s way of saying “hi” to you. She could also be seeking your attention or showing affection.

Maybe she missed you all night, and she wants to spend some time with you. Or she’s hungry, and she’s just asking for breakfast.

Let’s take a closer look at the behavior- called bunting- and get a more in-depth with those reasons, shall we?

What Is Bunting In Cats?

According to Pam Johnson-Bennett, a renowned cat behavior expert, the habit that most cat owners refer to as headbutting is actually known as head bunting.  So, what is it and why do cats do it? Let’s find out.

Bunting is where your cat gently rubs her forehead onto your cheek, chin, or any other part of the body.

As you’ve figured out, this mostly happens in the morning, but it can happen any time of the day.

You may also observe your cat bunting on furniture, the wall, or other objects.

You see, cats have scent glands in several parts of their bodies, including their heads.

So, every time they rub on to something, they’ll leave their scent.

When your cat is gently bunting your face, it’s simply a social interaction that involves her leaving her scent on you.

Scent-marking in cats is not just for marking their territory. Sometimes they do it to show that they trust you or as a sign of affection (more on this later).

What Is The Difference Between Pressing And Bunting?

While you may mistake headbutting and head pressing, they’re two different habits.

As mentioned earlier, cat bunting involves gentle rubs. On the other hand, head pressing involves your cat pushing hard on a surface.

This could be a wall, a tree, or any other hard object.

While bunting is often a sign of affection, head pressing is often a result of pain, and your cat is looking for ways to relieve it.

Below are some of the reasons your cat may be head pressing;

If you own an aging cat, she may be suffering from CDS (Cognitive Dysfunction Syndrome).

This condition makes them lack basic cognitive skills such as maneuvering around objects.

So she may be pressing against an object because she’s stuck. And doesn’t know how to go around it.

Besides head pressing, your cat could also be exhibiting the following symptoms;

As you can see, head pressing is more of a health issue.

So if you notice this behavior, accompanied by the symptoms I’ve just listed, it’s best to contact your vet for diagnosis and treatment.

Avoid using human medication such as aspirin to treat headaches.

According to the British Veterinary Journal, aspirin could lead to loss of appetite, depression, or even worse, death.

4 Reasons For Bunting In Cats

Now let’s see why your cat wakes you up with a headbutt every morning or occasionally.

Cats have different sleeping patterns than humans. So when you want to extend your sleep, your cat woke up a few hours before you, and she’s just waiting for you to wake up.

So she’ll climb up to your bed and give you a nudge by rubbing your chin, telling you that it’s time to wake up and spend some time with her.

In most cases, she’ll also be purring as she bunts. In such a case, the best thing to do is respond with affection.

You can cuddle or speak to her gently. She’s doing nothing wrong, so there’s no need to yell at her.

Instead, encourage this behavior since it improves the relationship between you and her.

Yes, this will leave you with some fur in your mouth or chin, but bonding and gaining the trust of a pet comes at a cost.

Other ways that felines show affection include:

As mentioned earlier, cats rub onto you or on any other object to leave their scent.

A lot happens when you sleep, and the scent which the cat may have sprayed the previous night may have rubbed off.

So, they’ll re-spray you with their scent to show that they’ve claimed you.

If you have several cats, they may take turns to mark you with their scent. There’s nothing to worry about, though. They’re just showing that they trust you and appreciate you as a member of their “pack.”

Your cat may also be looking forward to the day’s routine. If you have a feeding or petting routine every morning, she may headbutt you to get your attention or remind you.

Not that you’d forget your responsibilities to her, but her night may not have been as peaceful as yours. If bunting doesn’t work, she may try to be more aggressive by scratching your bed or meowing continuously. Other behaviors of seeking attention include;

Your cat may also be showing you that she’s in control. When living in a multi-cat household, you’ll realize that dominant cats may bunt submissive cats.

But when she does to you, you should be slightly worried.

At first, it may seem subtle, and if she doesn’t show any aggressive behaviors, you can allow her to be the “alpha.”

However, it may escalate to problematic behaviors such as marking by urinating and biting, especially when you don’t respond to her headbutting.

What To Do When Your Cat Headbutts You

The best way to respond to a cat headbutting is to try and find out why they are doing it.

If they’re seeking your attention, you can pet them, talk to them, cuddle, feed them, bond, and show them that what they’re doing is okay.

But not everyone enjoys being headbutted every morning. So if you don’t like it, you don’t have to react in any way.

If you realize she’s exerting dominance, ignore her. When she realizes that it’s not working, she may quit the habit.

Avoid yelling at her or hitting her since this will break the trust between you and your pet.

You can let out a soft “ouch,” and when she gets the feeling that she may be hurting you, she’ll stop headbutting.

Should I Headbutt My Cat Back?

Yes, you can, as long as your cat is okay with it.

Be gentle and observe her reaction.

Some cats will like it, but other cats will think you’re attacking them, and you do not want to be on the receiving end of a defensive cat.

Why Does My Cat Headbutt Me in the Morning FAQs

WHY DO SOME CATS HEADBUTT AND OTHERS DON’T?

Cats all have different personalities, and they may express affection to their owners and other animals differently. Headbutting is only one of their ways of showing affection. If your cat doesn’t bunt you, it doesn’t mean that she doesn’t love or trust you.

DO CATS HEADBUTT OTHER CATS AS WELL AS PEOPLE?

Yes. Cats that trust each other will bunt each other occasionally. As they headbutt, they’ll also be sharing their scent, which is a method of building a positive bond and identifying each other as members of a family.

Yes. Cat bunting is a way of showing affection. It’s a sign of trust and a way of communicating with other cats. Unless your cats start getting bossy and aggressive, headbutting is not a habit you should be worried about.

DO CATS HEADBUTT TO MARK TERRITORY?

Marking their territory is not only the reason that cats rub their scent onto people or objects. Scent communication is more complex. They may use it to assess danger, especially when they meet a stranger (be it another person, another cat, or another animal). They can also headbutt/spray scent to mark the areas as “safe,” warn other cats, draw out mating companions, or sign friendship with other cats.

I hope that clears everything up. The next time your cat bunts you in the morning, don’t scold her or punish her.

She just misses the moments you spend together.

However, it shouldn’t be mistaken for head pressing, which is often a result of an underlying health issue. Make sure you have her checked out by a qualified vet.

Does your cat headbutt you in the morning? Please share with us your experience!