Two-Faced Cats Are Going Viral. Here’s How They Got That Way 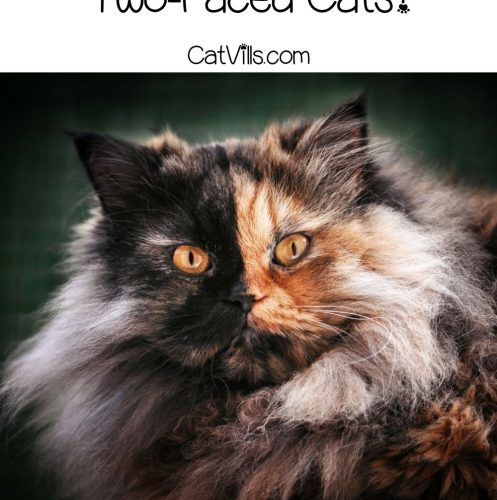 It would probably have been hard to notice that they exist if it weren’t for a news story about Frank and Louie, the ragdoll Janus cat, a few years ago.

Today, another Janus is making headlines, thanks to a viral TikTok video (below).

But how did these two very different chimeras get that way? Let’s find out!

Where Did They Get the Name Janus cat?

The name Janus cat was taken from the Roman god, Janus, who happens to be the same God that the month January was named after.

Janus is supposed to have two faces — one facing the front, and the other facing the back. This feature is the reason why Janus cats are named after him.

You can probably think of Janus cats being the cat version of conjoined twins. However, it’s not really that simple.

Two-faced cats do not have a particular set of characteristics since they are products of genetic mutations.

In the case of Venus and Quimera- two cats who have gone viral on social media– you have a face that is divided in the midline with two very different features.

There also is the case of Frank and Louie (aka Frankenlouie), a cat that seems to have a more complicated set of facial features. Frank and Louie seem to have an extra eye at the center and a pair of faces in one head.

What could be the reason behind these facial features?

A published report in the journal Animal Genetics explains that this rare situation is most probably caused by a genetic mutation, known as chimerism,  which is more commonly seen in female cats.

An offspring — whether of a human or an animal — is normally supposed to have one set of DNA which it inherits from its parents. (Yes, chimeras in humans do exist as well!).

While another cat breed, the Calico cat, is known for having a genetic mutation that results in its unique coat pattern and color that can be similar to a chimera, the mutation in a chimera cat is totally different from that of the Calico’s.

In fact, genetic testing is the best way to find out if the cat is indeed a chimera or not.

There is no known reason why chimerism occurs. It is suspected though that chimeras in animals may be a result of the fusion between two embryos during the early stages of the mother’s pregnancy.

There are ongoing and highly controversial experiments in research laboratories that are trying to study this rare genetic phenomenon.

READ MORE: All About the Devon Rex

The Personality of a Two-Faced Cat

The mutations in a two-faced cat affect only its physical traits. Otherwise, a two-faced cat will have its own personality which is usually related to the breed where it is classified under.

The science is still out on whether or not chimeras are more prone to health issues. In fact, the popular Frank and Louie lived up to 15 years!

It should be noted though that chimera cats do have the tendency to be obese. Having that tendency to be overweight makes it more prone to developing diabetes and heart problems, just like in any ordinary cat.

As in any ordinary cat too, chimeras may be prone to urinary tract infection and other kidney problems so it would be wise to be mindful of their diet.

Caring for a Two-Faced Cat

Except for the physical attributes resulting from a mutation in its genes, a chimera cat is just like any other cat.

Since it is not a specific breed on its own, caring and grooming for a chimera cat should be based on grooming recommendations for that particular breed under which the cat falls.

If the two-faced cat is a long-haired cat, expect the need to groom it more than a short-haired chimera.

Other than that, grooming and caring for a two-faced cat will be pretty similar to any other cat.

Dietary requirements, too, are the same as most cats. Their diet should be high in protein and low in carbohydrates and grains, especially since two-faced cats are more prone to obesity.

Any breed of cat can result in a two-faced or chimera cat. Therefore, all the basics needed for its health and wellness will be the same as all cats.

Check: How Long Do Calicos Live?

IS THE TWO-FACED CAT A SPECIAL BREED OF CAT?

No. A two-faced cat is a result of a genetic mutation called “chimerization”. It is not a specific breed nor is it being produced as a breed. It really is just a genetic glitch that may occur as early as fertilization. In fact, a two-faced cat can be born in any cat breed.

IS IT HARD TO CARE FOR A TWO-FACED CAT?

Since a two-faced cat is not a specific breed of cat, caring for it really depends on the cat breed it is categorized under.
Long-haired chimeras will need grooming more than short-haired ones, while short-haired ones will be easier to manage than long-haired cats.

Since two-faced cats are products of rare genetic mutations, there is no known life span that can be attributed to the chimera. There is a record though of a two-faced cat that has lived up to 15 years.

A chimera is a wonder of nature that has been gifted to us. What makes it even worth more of our amazement is its rarity.

There are ongoing attempts to create chimeras to eventually turn them into a breed and, although there is still much left to be understood about this amazing creature, maybe it would be better not to mess with nature in this case.

What do you think about how two-faced cats got that way? Do you think breeders should purposely try to recreate the mutation, or is that crossing an ethical line? Share below!