The Surprising Answer to the Question “Do Cats Give Hugs”

We’ve got you covered with this detailed guide! 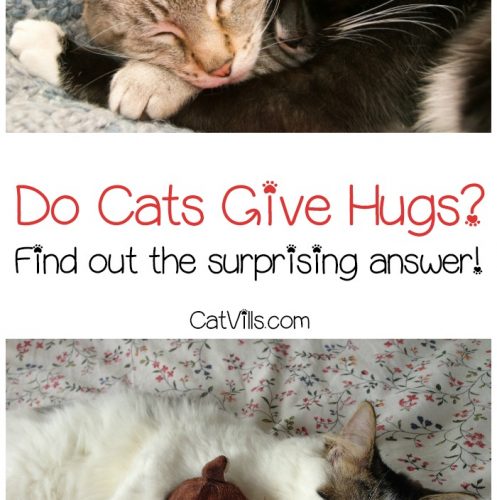 Do Cats Give Hugs?

The short answer is yes.

The real questions are, “WHY do cats give hugs?” and “Do cats LIKE hugs?”

That’s what we’re going to talk about today!

Check: How to Tickle Your Cat

Cats use a hugging motion during play and hunting to subdue their “victim” – whether literal or figurative.

Cats will wrap their front legs around another cat, prey, or your arm, kicking with their hind feet, and usually while biting.

If the subject of their attack is not prey (or a territorial feline opponent), they will likely kick and bite lightly – a form of playful affection.

But this isn’t the only time cats give hugs.

That, my friends, is the million-dollar question! In many ways, cats hug for the same reasons we do.

They hug to show affection, to protect, and to feel protected.  It’s another way they show trust, and an excuse to be as close to you as physically possible.

Cats may also “hug” to capture their prey, which in some cases is you! Let’s dig a little deeper into each reason! Other times, they may just be mimicking your behavior!

Years ago, I rescued a cat from a difficult situation.  She had never met me before, but when she was handed to me, she wrapped her paws tightly around my neck and buried her face in my shoulder.

She was looking for security, and trusted me to give it to her, without even knowing who I was.

Twelve years later, she still comes to me for hugs! She will stand on her hind legs with her front paws wrapped around my thigh. When I pick her up, she again clings to my neck to be cuddled – often licking my cheek at the same time, giving rough cat kisses!

I have another cat – formerly feral – who likes to lay on the arm of my easy chair and will wrap his paws around my forearm and nibble at my fingers.  He’ll fall sleep like that for hours, holding tight to me as he does.

Stories like mine aren’t uncommon. Talk to just about any cat parent and they’ll regale you with tales that definitely answer the question, “can cats love?”

Of course, there are many reasons for cats hugging humans other than affection, so let’s talk about the next reason: protection.

Related ➱ ➱ Is it ok to kiss my cat?

When Cat Hugging is All About Protection

“My cat hugs my neck when she’s scared!”

“Why does my cat wrap around my arm?”

If either of those questions sound familiar, there’s a very good reason for it.

Cats hugging each other for protection is quite like cats hugging for affection because both require a certain level of trust and respect towards you on your cat’s part.

If you’ve ever observed feral cat behavior, chances are you’ve seen them embracing and thought “why do cats hug each other?”

I have a family of ferals outside my home and while many of them are unrelated, they hug like one big happy family.

It’s not uncommon to see a mama cat hugging her baby, or two older cats embracing each other.

One could guess that a mother cat hugging her babies is trying to calm them and protect them from harm, and two older cats snuggled together may be conserving warmth or guarding each other.

This behavior crosses over to tame cats, as well, except they may view you as a stand-in for mom or a sibling.

When my cat gets scared, she wraps her arms around my neck much the way the toddler embraces his mom: with that sense of urgency, terror, and “please protect me” in her eyes.

Related ➱ ➱ Do cats get jealous of each other

The “Cat Hug” Hold: When It’s All About the Prey

Honestly, the “cat hug” prey hold is probably the most common reason for kitty hugs. As much as we’d love to think that it’s all about the love and trust, most cat behavior is prey-driven. It’s just how they’re wired!

My cats will lure me into a false sense of security by rolling onto their back and “hugging” my hand as I pet them. Then, without warning, they launch into kicking and biting! Kind of makes me wonder, “does my cat like me???” or “What did I do to make you so mad?”

The good news? You didn’t do anything wrong. Your cat views you as a playmate, and this little game of “attack mom’s hand and make her bleed” is just a fun way to hone her hunting skills.

The bad news? It still hurts! I’ve sustained more injuries from my loving cat than from the ferals who live outside! At least they pretty much ignore me or run from me!

Even these painful (to you) attack games are a sign of trust and affection, though. Think about it: your cat wouldn’t be exposing her soft, gooey underside to someone that she didn’t trust to fairly play the game.

Sometimes, cats hug simply because they see you doing it. Hugging with both paws – as opposed to simply draping an “arm” over another cat or human family member – seems to be a trait that cats have learned from us.

Through millennia of sharing our homes, it would be difficult for any creature as smart as a cat not to pick up a few things.

Hugging, of course, isn’t the only thing they have begun to mimic from humans.  Meowing is also a trait reserved for communication with humans, and they have even learned a little of our own language.

It’s really not much different than with humans – imagine yourself in a foreign country for years on end.  Even without formal education in the country’s language, eventually you will begin to associate particular sounds with specific objects, people, or activities.

The difference with cats, of course, is that they lack the biology to mimic our speech – otherwise I’m sure we’d be having full conversations with them in whatever language is spoken around the home.

Cats often don’t choose to be as “trainable” as dogs, but it isn’t for lack of intelligence – they just seem to prefer to make up their own minds.

To Hug or Be Hugged…

So, now that you know everything about cat hugging, maybe you’re wondering if you should go off and hug your cat or let him come to you! Most cats I’ve met seem to prefer to be doing the hugging, rather than being hugged themselves.

While they like to be secure, and some like to be held, actually holding them tightly restricts their movement and generally makes them uncomfortable (like everything, there are some exceptions to this – some cats love to be swaddled).

This is something they begin as kittens, and it serves multiple purposes, including stimulating milk production in their mother, marking their territory through scent glands in their paws, and making their sleeping surface more comfortable.

The best thing about cat hugs is the effect they have on us.

Being hugged by a cat, or even just having one lay next to you and purr, is great for human mental health, stress management, and even – in some cases – physical health.

There is a great deal of evidence that the frequency of a cat’s purr can aid in healing!

Hugging your cat is beneficial to you both and strengthens the bond between you.  Just keep in mind that if your cat begins to struggle, it’s wise to set him down – for his safety, and yours.

We will likely never know all the reasons why cats hug outside of hunting and fighting, but they definitely do.

Do your cats give hugs? Share your thoughts on why below!

I currently have a number of pets – a dog, five cats, four zebra finches, a red-eared slider turtle, and a Betts fish. The cats and dog are all rescues, so none are pure-bred. The dog is a 17-month-old Border Collie mix, and the cats consist of two tuxedo cats, one torre, one long-haired calico, and one all-black formerly feral sweetheart.