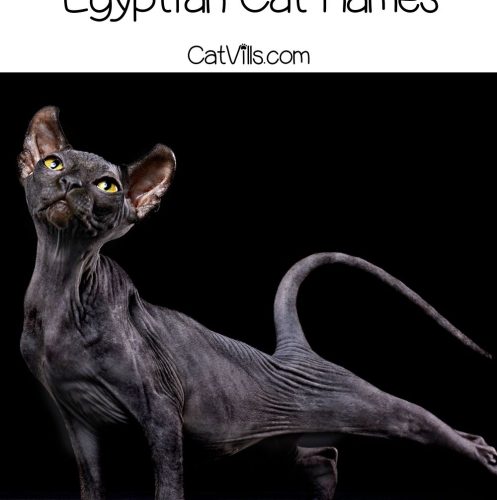 Are you a cat lover or parent searching for some of the most beautiful and elegant Egyptian cat names? You’ll absolutely love our list!

We chose 25 ideas each for male and female kitties that are just perfect.

Take a look, and then tell us your favorite!

In Ancient Egypt [1], cats were considered sacred beings (something cats have never forgotten!). Egyptians were superstitious and held particular beliefs about magic.

They believed that cats were magical creatures that brought good luck and fortune to their owners.

Based on that, many Egyptians would treasure these pets, and wealthy families clothed their domesticated cats – often Maus – in jewels and fed them like royalty. Once these cats died, they were mummified and often buried with their owners.

In the nineteenth century [2], it was more common for domestic pets in Egypt to have a human-like name. Cats were seen as the embodiment of Gods.

They represented the goddess named Bastet [3] or Bast and known as Baset, Baast, or Ubaste. This was the sun god and the daughter of Ra. Cleopatra was the queen of the Ptolemaic Kingdom of Egypt from 51 to 30 BC.

She loved pets and had an Egyptian Maus cat named Tivali.

The worshiping of cats started when the Ancient Egyptians realized that cats could protect them against tiny rodents and insects who were destroying their food and houses.

It was just a little step from there to the cats becoming sacred. The Egyptian cat names we present now are charming, and they really are Egyptian names for Sphynx cats.

These are some of our favorite Egyptian cat names that could be a recommendation for your own kitten.

These include a selection of female cat names, all of which are Egyptian, and appropriate for naming your cat. They are quite popular and are as follows,

All the Egyptian cat names are interesting and have a unique meaning. It’s like they were each made to match the personality of any cat.

These include a selection of male cat names, all Egyptian and appropriate for naming your cat. They are gaining popularity and are as follows,

I know there are a lot of jokes about cats being the masters of the house, but it’s important to realize that at some point, they really were.

What Did Egyptians Name Their Cats in Ancient Egypt?

Many people have wondered this exact question. [4] Firstly, animals in Egypt were called or known as Miut. [5] Knowingly, cats carried status as they resembled God.

So, their names had to follow in this accord. Popular names mentioned above included Nefirtiti, Berenice, Papyrus, Ma’at, Tut (representing Tutankhamun), son of Bastet, Salma, Bahiti, Rana, and Sara.

The name of an Egyptian cat carried their status and symbolized something to society. So, their name was not given loosely.

Sekhmet, the Egyptian goddess of war, is often depicted as a lioness, which symbolizes the cat feline bloodline’s great status. Whether you have female cats or male cats, all these names are suitable for either.

When it comes to choosing a name, you have to think about what you want your cat to represent or stand for.

Is your cat the protector of children, fighter, or a breed that represents an Egyptian ruler? Select a name that matches the characteristics of your cat, and stick by it.

It’s magnificent if the name is not well-received by others, provided that you love it and that it resembles your cat’s character.

Find out some of the most amazing Egyptian cat breeds!

Are cats still seen as sacred in Egypt?

No. Cats were only seen as a vessel of God [6] which drew many to want a cat to obtain closeness to divinity.

Can anyone use Egyptian names for their cats? 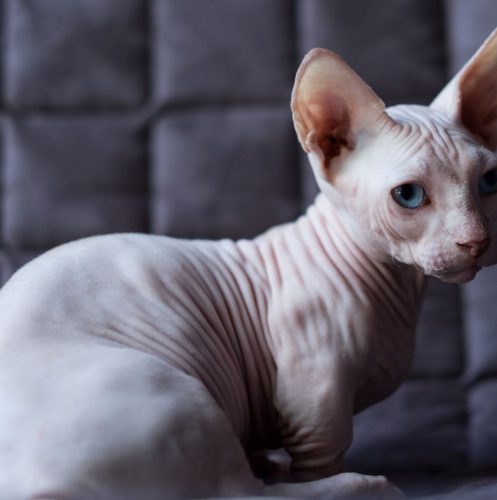 Yes. It won’t be appropriating their culture or language by doing so.

Do Egyptians still have cats?

Yes. Although the meaning behind the cat might be somewhat different as opposed to back in the day.

Can I name any breed of the cat an Egyptian name?

Yes! You aren’t ever restricted in terms of what to name your cat. So, regardless of whether it is a black cat or white cat, you can name it whatever you feel is appropriate.

Will my cat listen to their new name if I rename them?

Yes [7]. Provided that you put in the work to train your cat, they should be able to understand and pick up on your body language and tone that you are speaking to them.

Cats in Egypt carried remarkable status, and their names reflected just that. Names are important.

Cats know and recognize their own name, and among other things, they can aid in training and having your cat as an indoor pet.

You want to name your pet something that is appropriate, fun, and not necessarily as popular and common as other cats.

Remember, nothing is ever set in stone and changes can be made through training if you would like to change your cat’s name.

Now, that you are equipped with a selection of Egyptian names suitable for your feline wanderer, we hope that this will be of help to you as you consider naming your cat.

Now, we would love to hear from you. What are your favorite Egyptian cat names? Feel free to share or ask questions below!