Genetta Cat Breed: All About This Unique Dwarf Cat

If you haven’t heard of the Genetta cat breed, don’t feel bad: you’re not alone.

This designer mixed breed is still very much a “work in progress,” and isn’t even officially recognized by the The International Cat Association yet. Learn all about it!

The Genetta is about as engineered as you can get in a kitty, mixing some very unusual breeds together to create a cat that appeals to fans of exotic pets.

Let’s talk a bit about how the Genetta came to be, including the breeds that make up this unique cat.

We’ll also discuss the breed’s characteristics, as well as the potential health issues that you should be ready for if you adopt a Genetta. 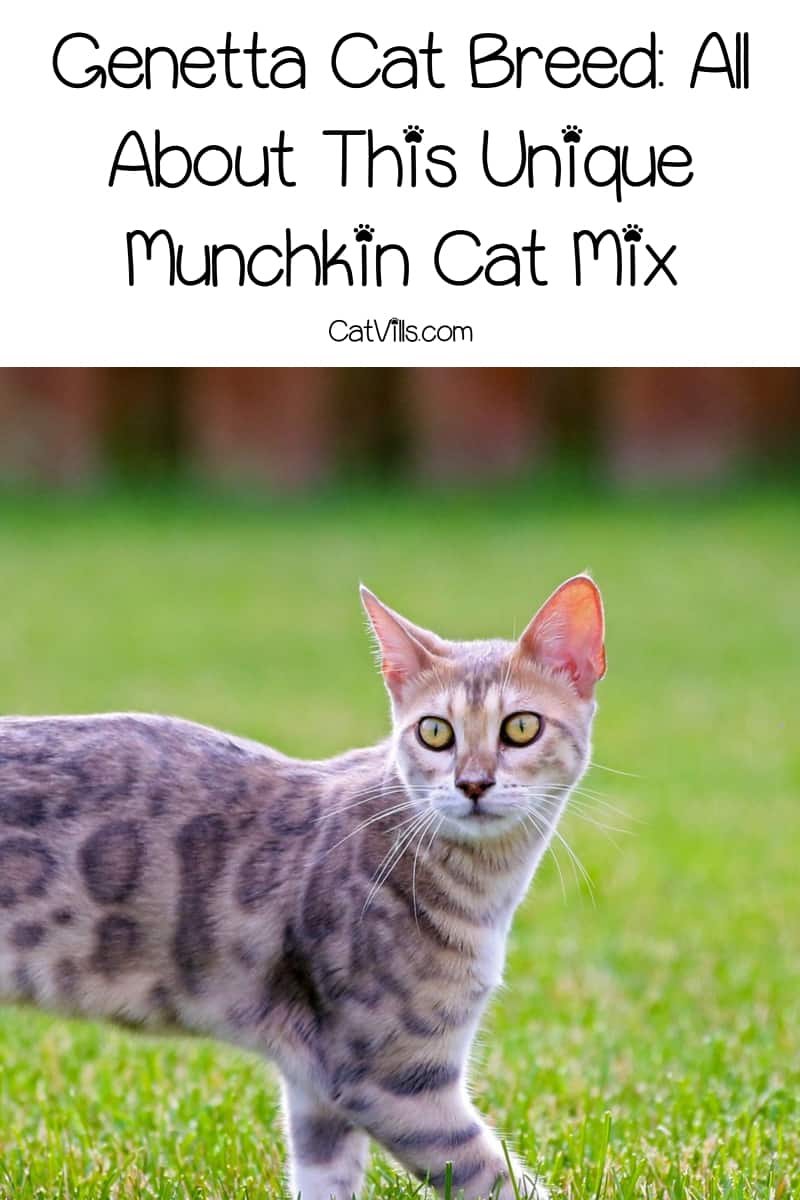 Before we begin, I want to make something clear: this article is for informational purposes only. It in no way means that we endorse designer cat breeding.

There are a great many ethical concerns surrounding munchkin cats as a whole, but especially when you’re combining some of the largest cats with the smallest.

While I have my own personal feelings on the subject, this is not an opinion piece. I will, however, talk about the ethical ramifications a bit when we get to potential health issues.

Now that we’ve cleared that up, let’s get started!

The Genetta cat combines some of the largest breeds- like the Savannah and the Bengal- with munchkin cats to create an exotic-looking designer breed.

Creator Shannon Kiley and Pawstruk Cattery started the process in 2006, when she set out with a goal of making a domestic cat that appeals to fans of the Genet.

Basically, Kiley wanted a cat that looked like the wild Genet but was friendly enough to be a house pet.

The end breed is essentially a mixed bag of genetics that primarily crosses Savannahs, Bengals, and Munchkins.

At this point, Kiley is also considering adding in some wild cat genes, like the Serval, to the mix, according to PetGuide (this is where I really have to bite my tongue in regards to ethics).

Let’s talk about what the Genetta cat looks like and what to expect out of their personality.

This video gives you a good idea of what they look like, although we’ll discuss it in more detail below.

Just what do you get when you cross the large Bengal and Savannah with a munchkin cat? Well, that depends entirely on which genes shine through the strongest.

Basically, the “end goal” is a cat that looks like small Genet. If you’ve never heard of the wild African feline, check out this video:

To me, the Genet already looks like it was mixed with a bunch of different animals, including the weasel and the raccoon! Cute, right?

The Genetta doesn’t really look quite like that, though. Instead, it looks like someone stuck a Bengal body on a munchkin cat’s legs.

I certainly can’t deny that they are adorable! Keep in mind that since they are an experimental breed, there’s no guarantee that every Genetta will look the same.

Even the color can differ significantly, ranging from silver to brown to black. It’s also common to see some white patches mixed in!

While they’re bred to have short legs, even that’s not a guarantee!

Munchkin cats have short legs because of a genetic mutation, but if you remember high school bio, genes don’t always behave as expected.

Personality of the Genetta

The Genetta is mixed with some of the most intelligent and lively cat breeds, so there’s a pretty good chance that each one will be smart and active.

Other personality characteristics include:

Again, keep in mind that with any mixed breed animal (including those that aren’t engineered!), there are no guarantees when it comes to personality.

However, since all of the breeds used to make the Genetta have the above traits in common, there’s a really good chance their offspring will, too.

As far as grooming goes, the Genetta cat is pretty low-maintenance. All cats shed to some degree (except maybe the Sphynx cat), but the Genetta is a pretty mild shedder.

At most, you’ll need to brush your kitty once a week. Cats in general are pretty good about grooming themselves, so you may not even need to do that!

For me, less shedding means fewer hairballs! If you’ve ever stepped in one in the middle of the night, you know why that’s a wonderful thing.

Again, it’s hard to determine the potential health problems because the Genetta is made up of so many different breeds.

Let’s look at problems that arise most commonly in dwarf breeds.

Munchkins are mostly healthy, but they are prone to lordosis, a painful and potentially fatal spinal condition.

While there are many different types, none of them make for an easy life for a cat. In the worst type, their spine compresses to the point of paralysis and, ultimately, death.

FYI, the genetic mutation that causes the short legs is referred to as the “lethal gene” because it kills so many kittens when it’s present in both parents.

Another issue that can affect your Genetta, concave chest  (pectus excavatum) isn’t exclusive to munchkins, but it does seem more common in them than full-sized cats.

Along with lung problems, this condition makes it uncomfortable for your cat to eat, so it can lead to malnourishment. Surgery is a must if you want your cat to live a healthy life.

Over on the Bengal side of things, heart disease is a fairly common issue among these large cats, which means it may become an issue in the Genetta.

The most common issue is hypertrophic cardiomyopathy, which causes the heart muscle to thicken. It’s mostly an issue in older Bengals.

Again, this comes from the Bengal side. Progressive retinal atrophy causes the rods and cones in the cats’ eyes to deteriorate, which leads to blindness.

Bengal cats are very sensitive to anesthesia. During surgery, it’s possible for them to have an allergic reaction or even a heart attack.

Now, I have a dog breed (a Pharaoh Hound) that is known for the same issue, and there are alternatives to the “dangerous” anesthesia options.

Just make sure you talk to your vet before spaying or neutering to find out if they can accommodate your cat’s needs.

Like I said, I’m not here to judge ethics. I will say that while TICA recognizes munchkin cat breeds, The Cat Fanciers’ Association flat-out refuses to do so.

Munchkin cats have proven to be a relatively healthy breed as a whole, so it’s entirely possible that the Genetta cat will be just fine, too.

What are your thoughts on designer munchkin cat breeds? Do you have a Genetta cat? Share below!

Nicole is the Editor-in-Chief and one of the writers here on CatVills. She’s been a cat lover most of her life and-at one point- counted five felines as part of her family. Today, she’s proud cat mom to two indoor kitties and caregiver for a slew of ferals.