Why Does My Cat Attack Her Tail? [Should I Be Worried?] 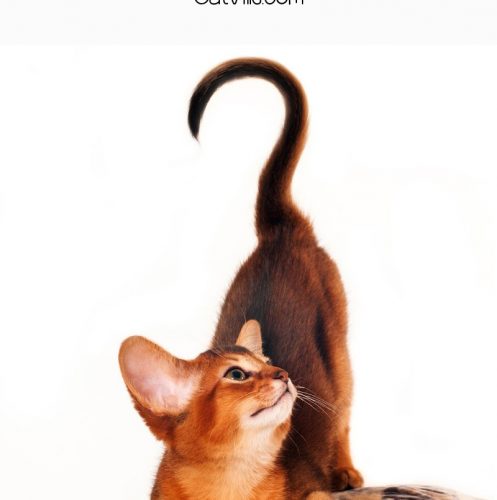 Why does my cat attack her tail?

Is your cat chasing at her tail aggressively?

Read on to find out why she does it and whether it’s something to worry about.

Why Does My Cat Attack Her Tail? [Should I Be Worried?]

Several pet owners have reported seeing their kittens chase at their tails at very high speeds without resting.

Kittens chase and attack their tails because they view them as playthings.

But for adult cats, it could be signs of pain, an infection, a flea bite, or any other underlying medical condition.

They may even hiss and growl at their tails. And when they manage to “catch” it, they may end up biting and hurting themselves even further.

This behavior may lead to an infection, and the tail may even need to be mutilated.

Pay attention to your cat’s actions and body language to identify a sudden change and the reason they may be chasing their tail.

READ MORE: Why Do Cats Bite Their Nails?

What are the Biggest Reasons for This Cat Behavior?

Below are some of the reasons why your cat may be attacking her tail.

A flea bite can be excruciating and itchy, and they’ll often leave bumps on the cat’s skin.

And to make it worse, adult fleas will often gather at the end of the cat’s tail.

So, when she’s aggressively chasing at her tail, she may be trying to reach and scratch the flea-infested areas.

Overgrooming is also a sign of a flea infestation.

Once you’re sure this is the cause of the tail-chasing problem, you stop it using the usual remedies for getting rid of fleas.

These include medication, spot-on treatment, and cleaning your home.

Ensure you contact your vet for the most appropriate flea-treatment method for your cat.

This is a rare neurological disorder in cats that’s characterized by strange behavior outbursts.

I mean, one moment, your cat is calm, and then all of a sudden, she starts frantically chasing at her tailor running around the house, very focused and with pupils dilated.

This behavior will last at least 20 to 30 seconds, and then she calms down.

You may also observe rippling on the cat’s body, strange vocalizations, salivation, or urinating uncontrollably.

It’s not yet clear what causes this syndrome. It’s also not fatal, but they may engage in self-mutilation, which may lead to infections.

But according to Dr. de Lahunta of the Cornel University College of Veterinary Medicine, it may be a result of seizure disorders or Psychomotor Epilepsy.

You can control this behavior by maintaining a constant routine of feeding and petting times. This will help keep them calm.

But the vet can also recommend anti-seizure medication, calming medication, or any other medications suitable for your cat.

Food allergies or allergies related to other environmental factors could be the reason your cat is attacking her tail.

Just like in people, allergies cause itchiness in various parts of the body. So she probably is trying to reach that end of the tail to ease the itchiness.

Other signs of allergic reactions include rashes and ear infections. If your cat is allergic to a particular type of food, obviously avoid feeding it to them.

You can also control allergic reactions with antihistamines and steroids.

Cats have Supracaudal Glands at the base of their tails.

Within these glands are the Sebaceous glands that secrete Sebum, an oily substance that helps maintain healthy and soft hair.

Stud tail occurs when these glands secrete an excess amount of Sebum, accumulating at the tail’s base.

When these oils combine with the tail’s hair, they cause a weird itchy sensation that your cat can’t stand. It may also end up in an infection.

Stud tail is common in unneutered male cats due to the mating hormones, but it may also occur in some female cats.

The best way to avoid a stud tail is to maintain good overall hygiene for your cat.

Antiseborrheic shampoos are very effective at keeping this part of the tail clean. If the stud tail is infected, use antibiotics.

You can also consider neutering your male cats.

Kittens are curious about moving objects. So when they don’t have a toy to chase and pounce on, they’ll start chasing their tails.

Adult cats may also exhibit this behavior from time to time, but most of them will outgrow it.

You can replace the tail with a scratching post, toy mice, or interactive toys.

Your cat may be stressed by changing a change in your house, a threatening wild animal, or adding a new cat to your household.

This stress may lead to redirected aggression where they attack and harm their tails.

Sometimes they attack their tails out of boredom, and interactive tails can help keep them entertained.

These may cause some discomfort and aggressive tail chasing.

Once you know the cause of the infection, you can choose the appropriate treatment with the help of your vet.

READ MORE: Cat Standing on Two Legs: Why Do They Do it?

Should I Be Worried?

Tail chasing is normal to some extent. If your adult cats did it as kittens, they are likely to chase their tail for fun occasionally.

But if they start attacking and biting it all of a sudden, then you should investigate the cause.

As I’ve explained above, most health conditions are accompanied by visible symptoms.

Check for blood, scratches, bite wounds, infections, or lethargy. But some conditions need X-rays, muscle biopsy, and other medical procedures.

This is after you’ve ruled out all the other reasons.

READ MORE: Why Do Cats Sleep Facing Away From You?

What if She Attacks Another Cat’s Tail?

When kittens are playing, they’ll often chase at each other’s tails. But the tail-biting can be aggressive when they are fighting.

Watch her body language as she chases the other cat’s tail. Is she tense? Is she flicking her tail and growling or hissing?

If you observe this aggressive behavior, separate the cats before they cause more damage to each other.

Do you have other ideas why cats attack their tails? Share with us below!