Why Does My Cat Nibble My Nose? [And How To Stop It] 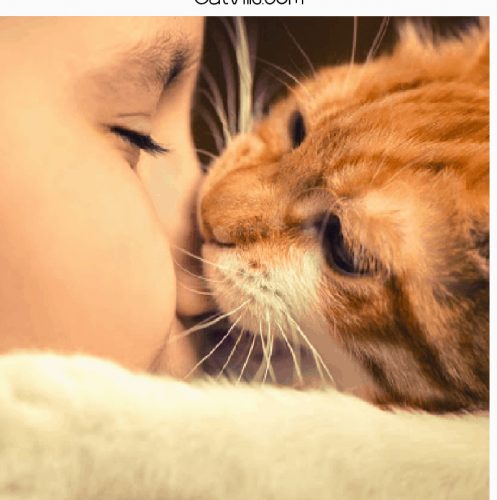 Why does my cat nibble my nose?

Is it a sign of anger, love, or just one of those things?

More important, how can I stop him from doing it when it hurts?

Read on to find out all the answers & more about this weird cat habit.

Why Does My Cat Nibble My Nose?

Cats do a lot of weird stuff sometimes. They bite nails, dig on your bed, or even destroy your furniture.

We have covered most of these habits, but today, I want to dive into another strange cat behavior; biting or nibbling your nose.

The bites may be light or hard, depending on why the cat is biting you.

It could be a sign of affection, anger, trying to groom you, or they’re just territorial of their owner.

Please keep reading to find out why they exhibit this behavior and the best ways to stop it.

At times, it may be challenging to narrow down to the real reason your cat is nibbling your nose, but let’s start with the best scenario: love.

1. They’re Trying to Be Affectionate

Different cat breeds have different ways of showing affection to their owners. And nose biting is one of the ways.

They may accompany it with purrs to show that they are happy to be with you. Some pet parents refer to this action as love bites.

And since they are portraying their fondness, the bites will not be that hard. In other words, these nips shouldn’t hurt.

At one point or another, every cat parent has fallen victim to bait-and-switch.

Your cat starts off all “love me, pet me, cuddle me,” then, without warning turns around and takes a chomp out of your hand.

While cats love cuddling with their owners, sometimes they may feel overwhelmed.

Biting your nose may be a way to show that they could use some time alone.

Studies aren’t conclusive whether this is the exact reason, but it seems to be the most viable explanation.

Cats are very sensitive animals compared to dogs. They pick up everything that’s going on around them.

According to Cat Behavior Specialists, when these sensations are coupled up with the pet owner’s affection, a cat may be overstimulated, leading to strange behaviors such as nibbling your nose.

Unlike in petting-induced aggression, they may give plenty of warning signs that they are overstimulated by flicking their tails, being tense, or even rippling on their sides.

If you notice any of these signs, cease petting them and give them some time to cool down.

Besides being sensitive, cats are also very territorial. If they smell the scents of another cat on you, they’ll try to “mark” their territory.

The cat’s scent glands are located on the paws and other parts of the body. So, as they bite, they probably are applying their scent to you.

Doing this reassures them that you belong to them, and it also warns other cats.

READ MORE: Cat Digging My Bed: Why is it?

She was obsessed with cleanliness that if she found a friend’s house dirty, she would try to clean it. Cats tend to do the same.

They are some of the cleanest pets, and when they sense a smell of food or anything unpleasant on you, they’ll try to exercise their grooming habits by licking and biting your nose.

Remember, cats have an excellent sense of smell. Even though you cleaned your moth after eating hours ago, they may still pick up the scent.

6. They Need Your Attention

Kittens love playing around with their littermates and even with you. This playing involves fighting, biting, and even roughhouse.

So when they bite, sometimes all they want to do is play. This habit is expected when they lack playmates.

As they get older, they may stop this habit, but some older cats may still use the biting habit to get your attention.

READ MORE: Why is My Cat Biting His Nails?

Cats get angry as humans do. And there are many reasons your cat may be secretly angry at you.

It could be a change in environment, a change in routine, losing interest in the toys, or they need to go outdoors.

When a cat is angry, he/she may engage in aggressive habits like biting. And this will be a painful hard bite, not the mild love bites.

Some of the signs that your cat is upset include;

Don’t cuddle with your cat if they seem upset. Instead, distract her with what they love most and give them some time to cool down.

8. She Wants You to Scratch Her Face

You may have observed your feline friend scratching against furniture, walls, or other objects.

While they may be scent-marking the areas, and picking up scents, sometimes they scratch because the area around the face is quite sensitive.

When a cat bites your nose, he/she probably wants you to help scratch her face.

It’s natural for a cat to establish dominance, especially if you live in a multi-cat household.

Cats also try to do the same to their owners by showing that they are the “boss” and the pet owner should do what they want.

If your cat bites you and shows signs of playing with you, they’re giving you “an order” that it’s time to play.

This is where a cat encounters a threatening occurrence, and they can’t confront the assailant directly, so they lash out at the closest pet or human.

For instance, your cat may be scared of the neighbor’s cat or a stray cat, but they can’t go out and fight, so they’ll direct this aggression to you by biting your nose.

If your cat was separated prematurely from his/her mother, she might resort to biting to ease the anxiety.

This often happens to stray cats that give birth to too many kittens and neglects them.

Pet owners whose cats gave birth to a larger litter may get rid of some of them before they have fully matured.

More Reasons Why Your kitty Bites Your Nose

Below are more causes;

Declawing is an unnecessary procedure that sometimes causes more harm than good. Declawed cats may;

Strange scents from other cats, perfume, or anything else around your home may upset your cat, causing the nose biting.

Unspayed and unneutered cats have exhibit strange habits such as biting when in heat.

If your cat is sick or in pain, they may feel stressed and act out by nibbling your nose.

If the biting is accompanied by lethargy, a lack of appetite, paleness, or vomiting, contact your vet ASAP for diagnosis and treatment.

How to Stop Your Cat From Nibbling Your Nose

Love bites may seem cute, but when your cat bites out of anger, it’s a very unpleasant and painful experience.

It would be best if you treated nose biting as an unacceptable behavior regardless of why they are doing it. And below are some ways to prevent it.

Train Them From an Early Age

If you tolerated nose biting when he/she was a kitten, they’d grow believing it’s acceptable behavior.

It’s understandable since a kitten’s teeth will not hurt, but as they grow, the bites will start to hurt, and it will be more difficult to make them stop.

You can teach them to play with other types of toys every time they try to nip your hands or nose.

How you train the also depends on why they are biting.

There are numerous reasons why your cat is nibbling your nose.

It could be anger, attention-seeking behavior, affection, grooming, and many more.

As we’ve established, start showing your cat that nose biting is wrong when they’re young.

If they carry over this behavior to adulthood, you can correct it by training, reprimanding, showing affection, and paying attention to the changes in your cat’s moods.

Do you have other ideas why my does my cat nibble my nose? Share with us below!

My name is Ben Roberts, and I absolutely love animals. So, naturally, I love writing about them too! As far as my animals, I have a Pit-bull, a Beagle-lab mix, a Chihuahua, and one old cat. Each one of them provides me with a new adventure every day. And the best part is they’re all best friends. Well, except the cat when he gets a little annoyed. Learn more about Benhere
FIND HIM ON: FACEBOOK AND TWITTER.
Read his latest ARTICLES