What Is My Cat Thinking? (Your Cat’s Innermost Thoughts)

What is my cat thinking about right now?

Do you wonder what goes through your cat’s head or if your cat thinks about you when you’re gone?

If that’s so, you’ve stumbled upon the right place to learn about your cat’s inner thoughts. 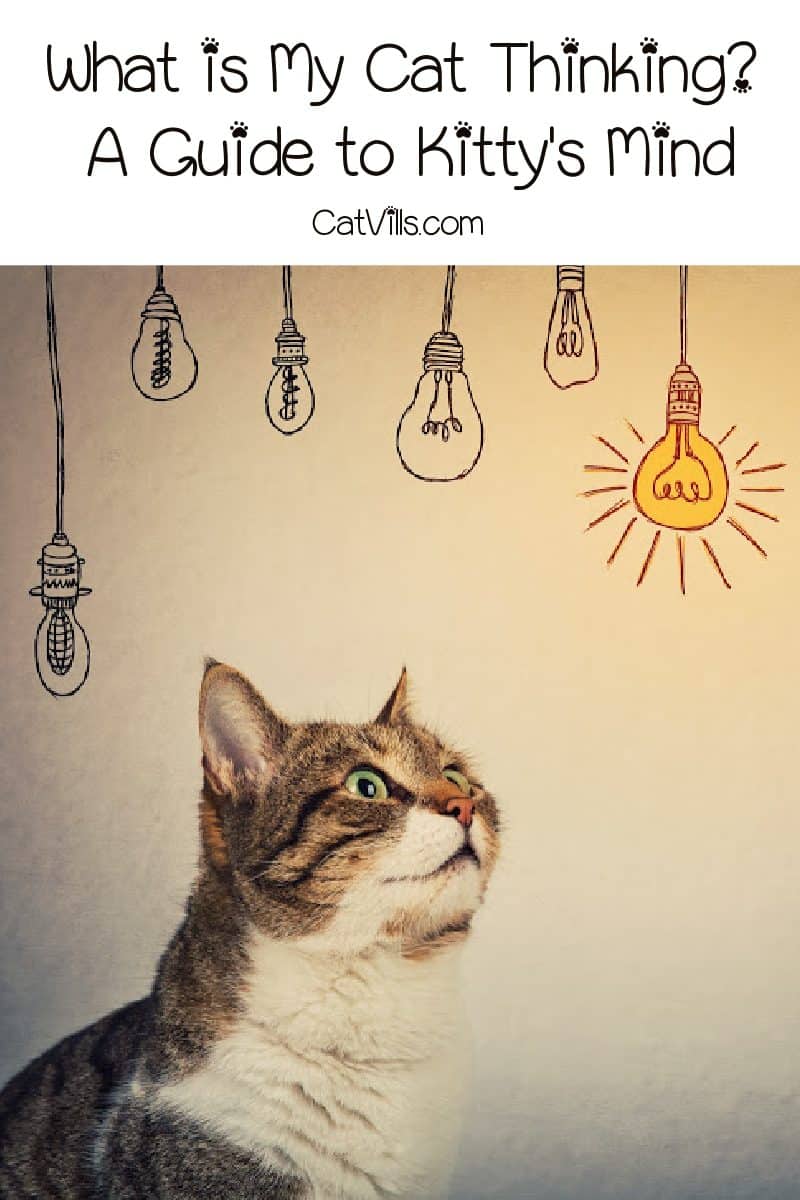 Inside Your Cat’s Head: What Is My Cat Thinking?

Living with our cats will be so much easier if we knew what was going through that cute brain.

No more wondering if your kitty is sick or what they want when meowing non-stop throughout the night.

Cats also stubbornly keep their secrets and don’t seem ready to share their mystical powers with us.

As such, it’s not easy to tell what your cat is thinking about, but we can make some educated guesses. 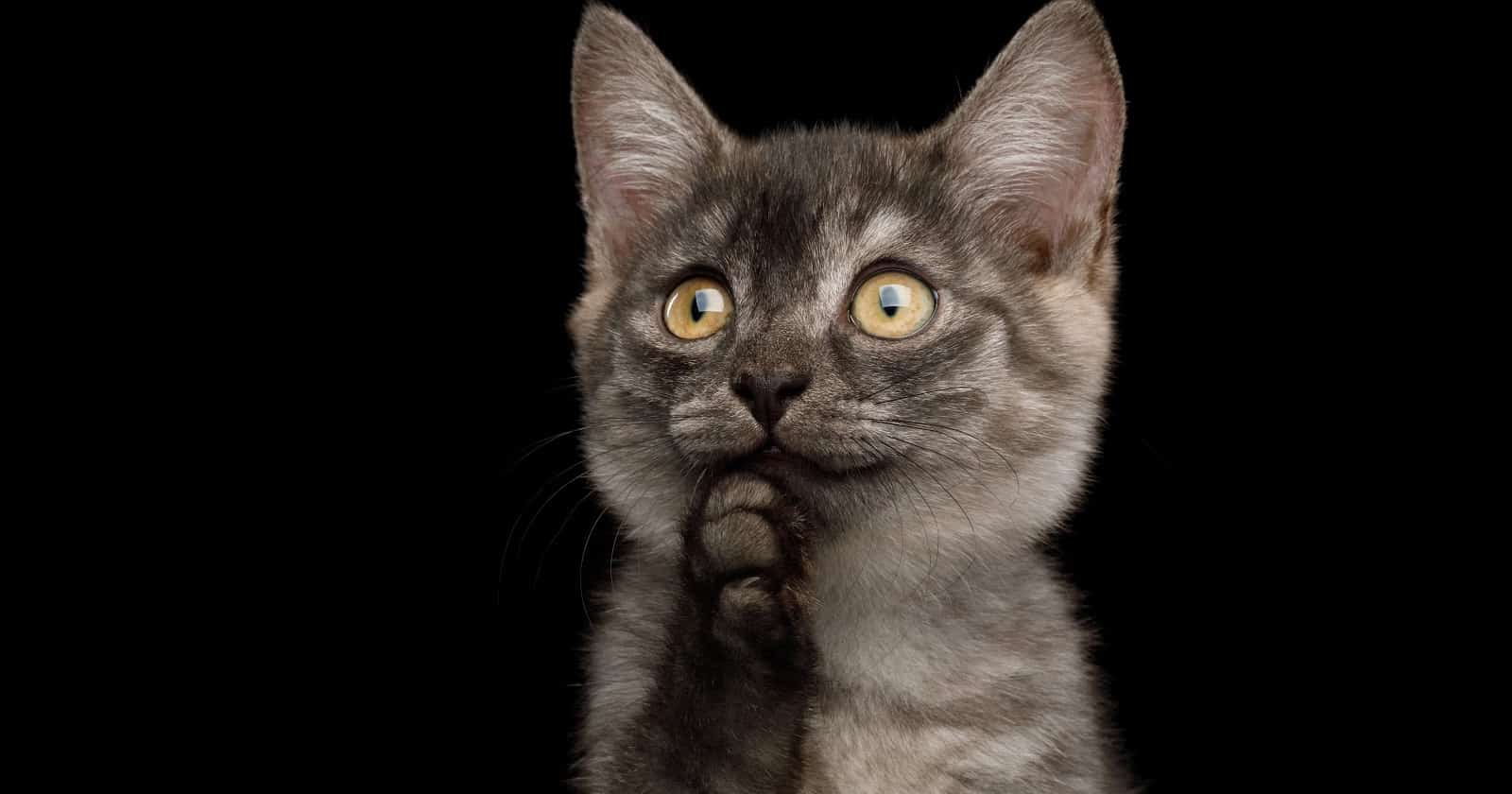 When you find your cat stuck somewhere, you can’t help but wonder if your kitty is capable of thought.

After all, no sane animal will squeeze into a tiny hole to check what’s inside.

So, do cats have thoughts?

As you can imagine, it’s almost impossible to study cat thoughts. What you can do is look at the brain to determine how capable of thinking cats are.

While cats’ brains are smaller than humans and dogs, scientists don’t think that size matters so much. The critical factor is brain structure and surface foldings.

Interestingly, cat brains are almost 90% similar to human ones, and their cerebral cortex is far more developed than in dogs.

Cats have nearly 300 million neurons, while dogs have around 160 million, and their surface folding is impressive.

The number of neurons might be a good indicator of intelligence since the cortex is where the brain interprets signals from the other senses.

Planning actions, making decisions, solving problems – all these occur in the cortex.

Moreover, the cortex is responsible for short and long term memory.

That’s why cats have much better long term memory than dogs and might remember where you keep the food for months/years.

As such, cats probably have thoughts, but it’s unlikely that cats think in the same way humans do. Otherwise, they would have taken over the world by now.

What Do We Know About Cat Thoughts? 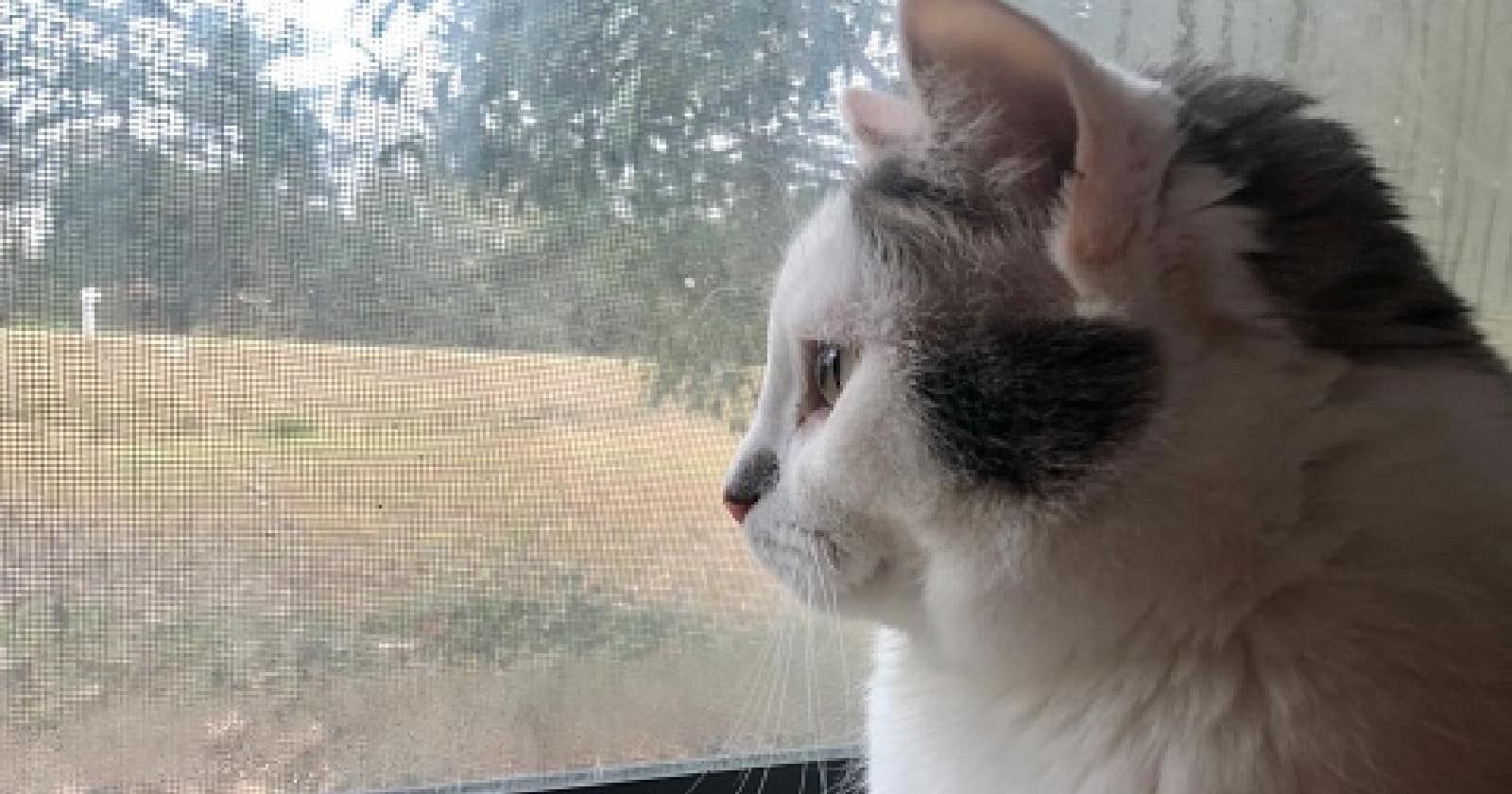 To understand how our cats think and get a glimpse of their inner thinking cat, we’re going to look at these categories.

Your cat’s ability to see, hear, smell, and detect stimuli is called perception.

Most experiments have tested cats’ hearing and seeing and have proven some interesting theories:

Still, cats don’t pass the mirror test – they don’t realize that their image is a reflection, not another cat. So, they might not have self-awareness.

Imagine that you put an object in a cupboard. You know that the item is there and hasn’t disappeared just because you can’t see it. That’s object permanence.

When your cat sends a toy under the couch, your pet usually stands there and waits for you to go and retrieve it.

Cats also tend to stand in front of the fridge or the cupboard where they’ve seen you put away the cat food.

As such, cats know that objects don’t disappear when they’re out of sight. Some felines also find ways to reach the object of their desire.

To test the notion of physical causality in animals, scientists usually use strings with attached food.

The animal has to figure out how to pull the rope to get to the food.

When it comes to cats, the experiments didn’t show that cats understand causality.

But that might be because cats love to play with strings and have nothing to do with their understanding of how objects relate in the world.

As I already mentioned, cats have excellent long-term memory. However, their short-term one isn’t that good.

That’s why it takes time for your cat to remember where food and water bowls are when you move them.

Interestingly, cats also discriminate quantities because they tend to go for the bigger pile of food.

So, don’t try to fool your pet by serving them half a portion. It won’t work.

What Do Cats Think About During the Day? As you can see, cats have extraordinary cognitive abilities that they employ to get their ways when the owner isn’t cooperative.

But you’re here to discover what cats think, not how.

So what is your cat thinking?

Unfortunately, I can’t give you a 100% correct answer, but I can speculate based on what we know about cat behavior and cognition.

Cats love to eat and can be very determined and demanding when hungry.

It stands to reason that what cats are thinking is how to get more food or make you feed them tasty treats.

Cats are also known to break into the cat food cabinet and steal food from plates, so they must have plotted how to do it.

Cats spend the better part of their life sleeping and can be very picky about their napping place.

They want a comfortable but secure spot where nothing can sneak up on them and disturb their rest.

So, what cats are thinking when staring at the wall might be contemplating where to sleep or wonder if it’s nap time.

Since cats are territorial animals, they are likely to spend some of their time thinking about their territory and how to mark and protect it.

After all, most cats patrol their home to ensure no intruders in the vicinity and don’t welcome warmly new additions to the household.

While domestic cats don’t have to hunt for food anymore, they still have sharp hunting instincts.

So, what cats are thinking about might be related to stalking, pouncing, and killing their prey, even if it’s just a toy.

Cats might be extroverts, but they still have feelings for their human owners and depend on us for food, attention, and petting.

As such, cats likely think about us throughout the day and might even wonder where we are.

Of course, what your cat is thinking might be world domination or when it is the best time to run crazy around the house.

Some cats probably also wonder about how to sneak outside when in heat.

What Do Cats Think Of Humans? 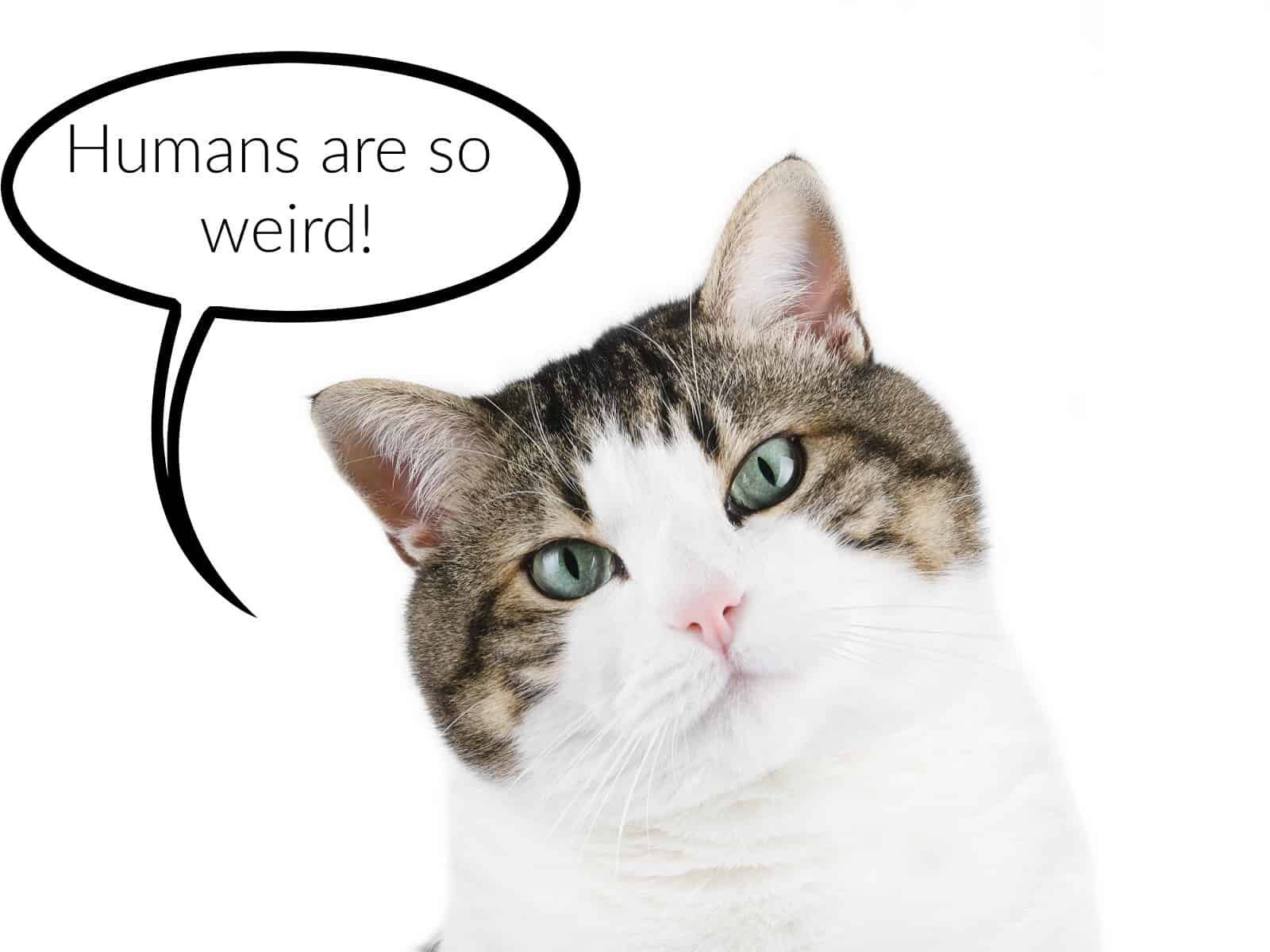 “What does my cat think of me?”

You might have asked this question when your cat is affectionate at one moment and a jerk a few seconds later.

So, how do cats see humans?

Scientists have observed how dogs and cats behave around humans.

As it turns out, dogs change their body language around people, while cats don’t.

These observations suggest that dogs realize that we are a different species, and that’s why dogs modify their behavior when interacting with us.

If you think about it, dogs never play with humans in the same way they do with other dogs.

But what about cats?

Do cats think humans are cats? 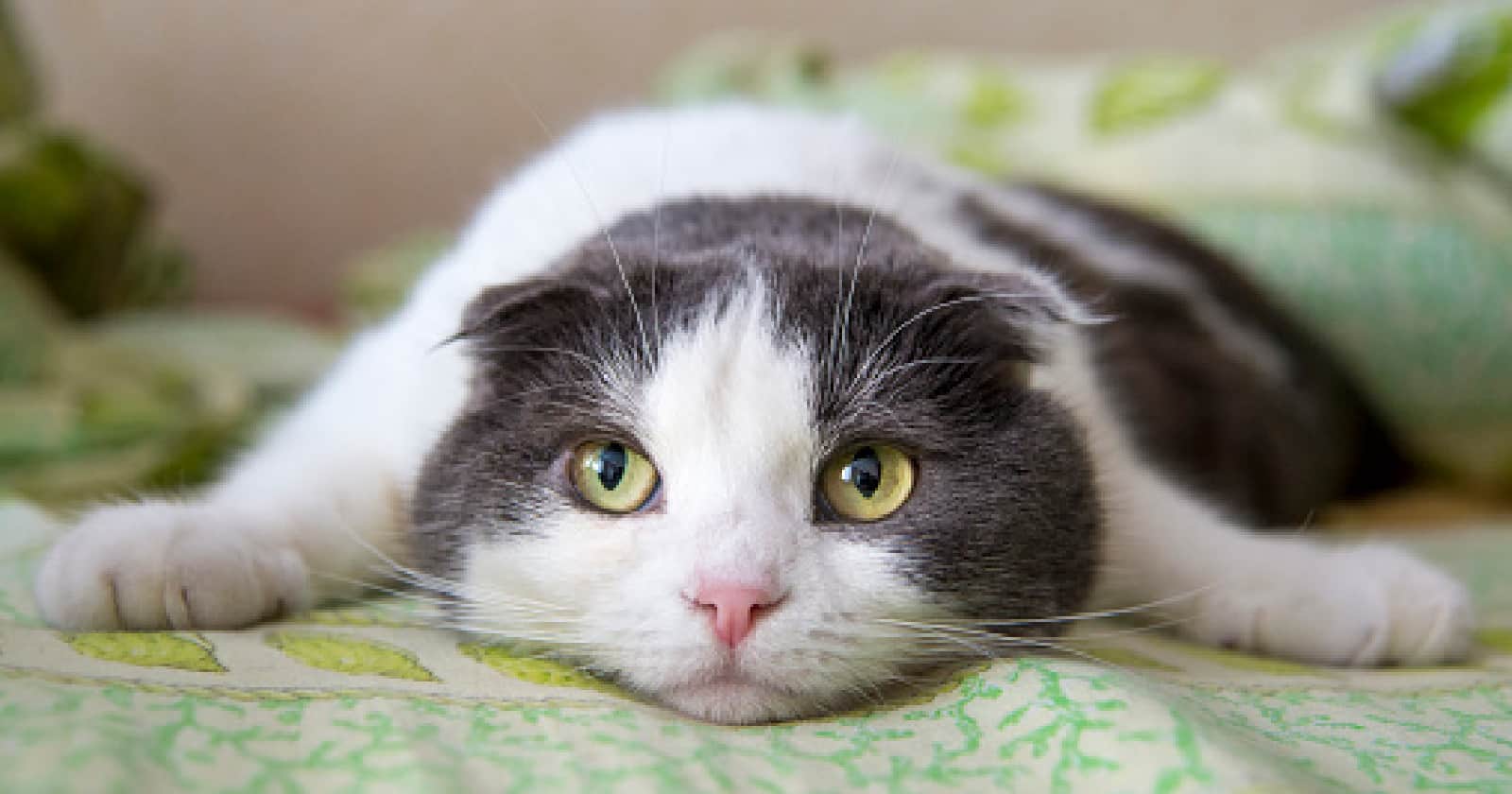 Cats welcome you with a raised tail, lick your hair, and rub their cheeks on your face/legs to mark you, and they do the same with other cats.

Moreover, cats bring us “gifts” probably because they think we are lousy hunters and need someone to teach us how to do it.

That’s what mother cats do for their kittens.

Our pets realize that we’re bigger and less furry than most kitties, but it doesn’t seem to matter.

We get accepted as cats, but our kitties probably put dogs and other animals in other categories, such as “danger,” “prey,” and “things to avoid.”

However, cats likely think we’re the clumsiest cat in the world since we often stumble when they dash between our legs.

Our strange routines, language, and the fact that we like baths are also baffling for our pets.

Cats are probably capable of more complex thoughts that we give them credit for.

There are plenty of stories about cats traveling for miles to return to their owner or finding their people in unfamiliar cities.

I don’t think cats would be capable of such a feat if they weren’t highly intelligent.

And as people say it, you’d never see a cat pulling a sled through the snow.

What do you think about the topic? Can you guess what your cat thinks about? Tell us more about your thinking cat in the comments.

I’ve grown up surrounded by animals – dogs, cats, cows, goats, sheep, and horses and that has shaped me into what I am today – a crazy cat lady who always has a place for one more cat (or a dog). I’ve got two female cats – Kitty and Roni, and two tomcats – Blacky and Shaggy, but I also feed my neighbors’ cats when they come for a visit. I just can’t say no to them.

I discovered that writing is my vocation early in my school years. Since then I’ve taken part in several literature contests – writing horror and fantasy short stories and novellas.
For the past three years, I’ve been an ELS teacher, pouring my heart into showing children and teenagers how important English is for their future and trying to educate them how to treat their pets with care.