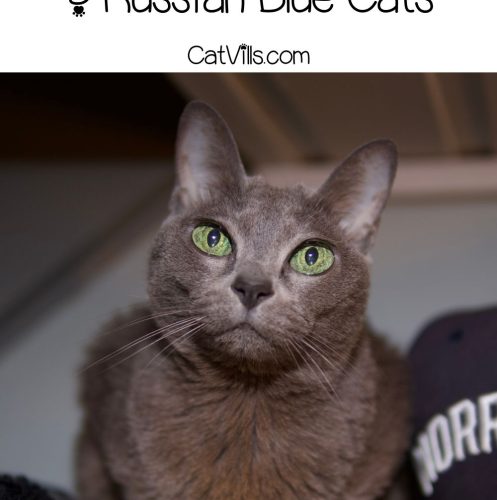 Comparing a Korat and a Russian blue cat can be challenging.

These breeds of cats look similar, so it isn’t surprising why one is mistaken for the other.

What are the distinguishing characteristics that you need to know precisely what you are getting?

Origin of the Korat and Russian Blue Cat

As its name implies, the Russian Blue cat originates from Russia.

Although the exact origin and history of Russian Blue cats are not known, it is said that Russian Blue Cats were transported by ship from Russia’s Archangel Island or Arkhangelsk.

These cats were said to be a favorite among royalty in Russia.

They were then exported to many parts of Europe and were one of the first cats that participated in cat shows in England in the late 1800s.

The Korat is an ancient breed and probably the purest breed known today.

Thai people believed and continue to think that Korats bring in good luck. For this reason, Korats are usually passed around as gifts to many in Thailand.

Korats were probably first introduced in England in the late 19th century because many cats back then were sold as “blue Siamese cats”.

These were most likely Korats that were mistaken for Siamese cats then.

Check: Everything About Russian White Cat

The color “blue” in animals describes a watered-down version of the color black. So before you get carried away by the term blue, it would be suitable to temper expectations and think of blue as a color closer to gray.

Korats and Russian blues have a “blue coat” and look almost the same. It is, therefore, not surprising if one is mistaken for the other.

Both have some distinguishing features, though. Their temperaments are also quite different. This chart summarizes the main differences between the two breeds.

Watch this video to get a more detailed insight.

One way to distinguish a Korat from a Russian Blue is to look at the shape of its head.

A Korat will have a distinct heart-shaped head that can be easily seen from the top of the front.

The Russian Blue cat’s head is more wedge-shaped or triangular-shaped, with the broadest area found at the forehead.

Russian blue cats have muscular bodies, compared to Korats, which may explain why they are heavier than the Korat.

Both cats are short-haired. However, the Russian blue cat’s coat is thicker than Korat since it has a double coat and a pretty dense undercoat.

The Korat, on the other hand, has a single coat and a very thing undercoat. The Korat is said to have one of the most beautiful coats in cats. The Korat also has silver-grey coats similar to the color of gunmetal.

The Russian blue cat has an even coat color that is also a bit on the silver side due to the silver-tipped guard hairs that they have. Their plush coats make them ideal for countries with a cold climate.

The Korat cat is a highly active, playful cat that loves to interact. It doesn’t fancy alone time much compared to the Russian blue, a more reserved, well-behaved cat.

Russian blues do not mind spending time alone, making them perfect for humans who have day jobs and are seldomly at home.

Both cats are brilliant and easily trained. The Russian blue cats, however, tend to be more sensitive. They like having clean surroundings, extending to even their litter box.

Russian blues take time to adapt to new surroundings and new pets, unlike Korats that can easily blend into any contemporary home.

The color of Russian blue cats is more of a dark, beautiful emerald green shade.

Both the Korat and the Russian blue cat don’t require much grooming since they are short-haired cats.

That said, both cats require regular maintenance like ear cleaning and toothbrushing for them to keep healthy.

Although both are sturdy breeds, the Korat is prone to a genetic disease called gangliosidosis.(3) This is a fatal disease that can appear at age 2-3 months and cause death in a year.

ARE THE KORAT AND RUSSIAN BLUE CATS EASY TO MAINTAIN?

Grooming is easy for both breeds of cats. A Korat cat seeks attention a lot compared to a Russian Blue cat. It needs interaction and can be demanding when it comes to this aspect. 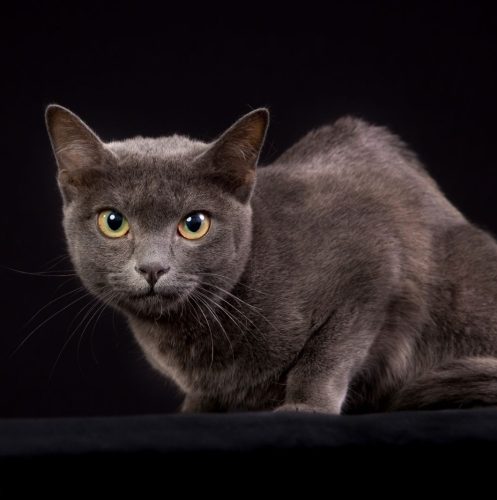 Korats are playful cats that seek a lot of attention.

Although the Korat and Russian blue cats may share many physical qualities, they have a bit of difference that makes one distinct from the other.

The stark difference, though, lies in their personalities.

Although Russian blue cats do not seek attention as much as Korats, they still deserve all the love and attention from their hooman families. That is, what has to be remembered when welcoming them.

Korat Vs Russian Blue cats: Which cat is suitable for you? Let us know in the comments below!