9 Reasons Why Your Cat Is Obsessed with You

You might be wondering what’s going on in your kitty’s brain.

So, today we’re going to talk about why some cats are so clingy and demand constant attention.

9 Reasons Why Your Cat Is Obsessed with You

Cats have the reputation of being aloof and independent.

It’s true that some felines accept petting and cuddling only on their terms and are perfectly happy to be left alone in the house.

On the other hand, we also have cats that follow you everywhere and can’t get enough of you.

These always jump on things you’re using and refuse to move until you pay them attention.

Some might even refuse to eat or drink if you’re not around to keep them company.

So, why is your cat so obsessed with you? Let’s find out.

#1 Your Cat Has Been Separate Early from Their Mother

Usually, kittens should be left with their mother until they’re at least 2-3 months old.

Sadly, a lot of newborn kittens get abandoned on the streets or become orphans when some accident befalls their mother.

As a result, such kittens don’t have enough time to bond with their mother or learn how to act like cats.

They might have problems grooming themselves and don’t know how to play well with others.

Sometimes such kittens bond tightly with their humans because they see their owner as a mother surrogate.

That’s why your cat suckles your clothes/blankets or doesn’t want to let you out of their sight. 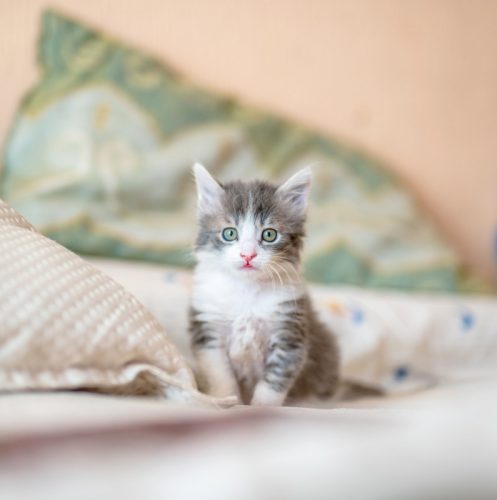 #2 Your Cat Is Insecure

Has anything changed in your house recently?

You might have introduced a new cat/dog to the household, blocked your cat’s access to some rooms, or started coming home late from work, for example.

Cats don’t like it when their usual routine gets disrupted because they don’t understand what’s happening.

What’s worse, you can’t explain to your cat why you have to work late or why they can’t sleep with the baby.

If your cat has lost a play buddy or a friend, they also might become obsessed with you until they feel safe again.

My point is that your cat needs time to adjust and regain their confidence and stability.

Until that happens, your cat might become obsessed with you. They want to keep you in sight to reassure themselves that the world isn’t ending.

Another reason why your cat is obsessed with you is fear, anxiety, or stress.

Some cats are shy and timid by nature, and they spook easily. All it takes is a thunderstorm, and suddenly you can’t go to the bathroom without a meowing escort.

Whenever your cat is anxious or stress, they’re going to stick to your side because you make them feel safe.

Some cats also might run to you for protection whenever one of your other pets or family members is bulling them.

That’s because your kitty knows that you won’t allow anything bad to happen to them.

So, show your cat how much you love them and be there for them when they need you.

#4 Your Cat Has Trust Issues

Adopting a cat from the shelter and giving them a forever home is a great thing.

However, you can’t know what your fluffy feline has been through in their short life.

You also don’t know how many times they’ve been returned to the shelter.

If your cat has been through multiple families already, they might have trust issues.

While some cats might hide and act hostile, others are quite the opposite and become clingy.

That’s because they want reassurance that this home will be a permanent one.

As such, it’s normal for your cat to seem obsessed with you and clingy during the first few weeks and months.

When your cat adjusts to their new home and realizes that you won’t kick them out, they will probably stop obsessing over everything you do.

Is your cat’s obsessive behavior something new? Then you better check with your vet because your cat might be sick or dying.

Some cats hide whenever they’re in pain or discomfort.

But others meow and follow you from room to room because they’re trying to communicate their distress and anxiety.

You’d better stop and listen to what your cat is saying.

Unfortunately, some cats also get clingy and might be obsessed with you when they’re dying.

That’s because they’re afraid and scare of being alone. They want to be close to you because you provide comfort and safety.

If you have a pregnant cat, her obsession with you might be one of the first signs that your cat is in labor.

So, congratulations! You’re about to have a cute litter of kittens very soon.

Usually, first-time mothers are terrified when the contractions start because it’s a whole new experience for them.

While some might hide and hiss when you get near them, others will stick to your side like glue until the moment they give birth.

Take it as a sign of how much your cat trusts you. Not all cats will allow humans near them when they’re vulnerable.

Your cat must love you very much if she’s sharing this incredible experience with you.

#7 Your Cat is Getting Old

Time doesn’t spare anybody, including our beloved cats. When your cat gets old, their vision and hearing start to weaken.

While that’s normal, your cat might lose their confidence when they can’t see or hear as well as before.

Naturally, your cat will prefer to keep close to you so that they can orientate in their surroundings.

#8 Your Cat Has Separation Anxiety

People often think that only dogs get separation anxiety.

It might be strange, but some cats are also prone to this condition, especially those that bond closely to a single person.

Besides destructive behavior, cats with separation anxiety are obsessed with you because they don’t want you to leave them alone.

Have you been ignoring your cat for too long? Then you shouldn’t be surprised that your kitty is obsessed with you.

Cats might have the reputation of solitary creatures, but they need attention even if they don’t show it often.

They’re showing you that you’ve been paying too much attention to other stuff, and you have forgotten that they exist. So, you should spend more quality time with your feline.

Your cat might be obsessed with you for many reasons, and your vet should address some of them.

If you don’t like being followed everywhere, you have to set your boundaries in the beginning.

Don’t encourage any behavior you don’t want your cat to repeat and don’t spoil your cat.

What do you think about these 9 reasons why your cat is obsessed with you? Do you agree with them or not? Share below!