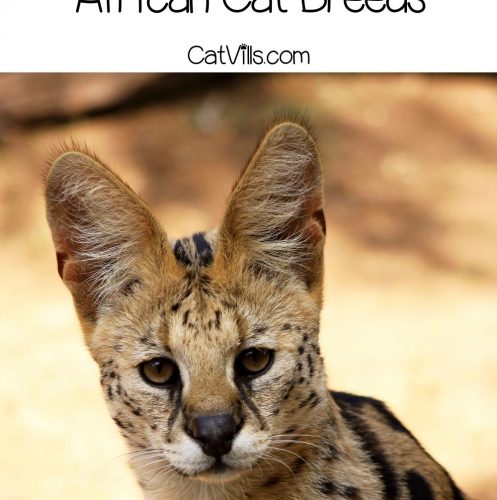 Which African cat breeds do you know?

And no, I don’t mean the leopards, lions, cheetahs, and other big cats you see on safaris.

I mean small cat breeds forgotten in the African jungle, though some were domesticated thousands of years ago, while others have been crossbred with other cats.

Please keep reading to find out more about African cat breeds, if it’s possible to get one, and how to care for them.

The Serval is a tall, slender cat that’s native to sub-Saharan Africa.

A large population of Serval cats is still found within Subsaharan Africa, but they are quite rare in the colder rainforests and North Africa, as they prefer warmer climates.

These are medium-sized cats, and they are characterized by large, sensitive ears, a small head, and a 21-24″ shoulder-length, and a weight of up to 40 pounds.

They’re shorthaired, with a golden-yellow coat, beautiful black spots distributed across the body, and a short tail.

Serval cats are known to pounce on their prey from heights of up to 2 meters. And they prefer feeding on rats, frogs, birds, and insects.

Can you keep a Serval Cat as a Pet?

Serval cats aren’t exactly domesticated, but you can keep them as pets, and they can bond with humans.

Their association with humans dates back to ancient times where Noble Egyptians worshipped them and kept them as pets.

Like any other exotic pets, Serval cat’s ownership is restricted, so make sure it’s allowed in your region.

If you choose to get one, remember they prefer to be in solitary, and you must have a wide-open space where they can roam around.

And they need whole prey as a significant part of their diet, but you can add pelleted food and or feline supplements.

If you really want to keep a Serval but are afraid of their wild tendencies, you can opt for the Savannah cat breed, which is a cross between the Serval and domestic cat breeds.

Unlike the Servals, Savannah cat breeds are friendly, sociable, loyal to their owners, and they will get along with other pets in your household.

The Savannah cat breed is rare and one of the most expensive cat breeds.

One of the reasons is that it takes up to 5 or 6 generations to develop the acceptable Savannah breed standard, and most males in the earlier generations are also sterile.

This cat breed’s ownership is also regulated. They’re banned in Australia and are restricted in states such as Texas, Massachusetts, Georgia, and Hawaii.

The African Wildcat is one of the oldest cat breeds.

There’s a chance these were the very first cats to be domesticated in the Middle East before spreading to other regions.

And they may be the ancestors of all the domestic cats we have today.

The African Wildcat didn’t only originate from Africa. There are traces of this cat breed in Asia.

African Wild cats are considerably larger than domestic cats, weighing up to 10 pounds, with a height of at least 0.25 meters and a 0.55 meters shoulder length.

Their coat is sandy grey, and it features pale stripes. The colour intensity varies based on where they live.

For instance, wild cats in wetter areas have a darker coat compared to those in drier areas.

Like most cats, African Wild cats are nocturnal. They pounce on prey and prefer to feed on rodents, lizards, and birds.

Scientists fear that the original African wild cats may become extinct due to crossing with domestic and local feral cats.

A native to the savannas of South Africa and Namibia, the black-footed cat is one of the smallest wild cat species in Africa and possibly worldwide.

In essence, that’s like 200 times smaller than a lion.

Despite the small size, they are some of the deadliest cats in the world, killing up to 3000 small animals every year.

According to Luke Hunter, the Chief Conservation Officer at Panthera Organization, a black-footed cat can kill up to 14 animals per night.

They have a hunting success rate of 60%, which is quite great considering Lions and Leopards achieve less than a 30% success rate.

Since they’re only common in a few parts of Southern Africa, they were identified as Vulnerable Species in the IUCN Red List.

The Caracal is another cat breed that dates back to ancient times.

Caracals are native to Africa, Asia, Middle East, and India.

Today, they’re spread across 50 countries, earning them the status of Least Concern in the IUCN Red List.

But they’re slowly facing extinction in some parts of Asia and Northern Africa.

Compared to the other cat breeds I’ve mentioned, the Caracal is quite large, featuring a stocky body, a 43-inch maximum body length, and a 0.5 meters (20 inches) shoulder length.

They can weigh up to 42 pounds. The name “Caracal” is Turkish, and it means black ears.

Caracals are also good hunters, and their ability to leap up to 10 feet into the air allows them to hunt small to medium-sized birds.

They also hunt rodents and other small mammals.

Just like the Servals, Caracals can be kept as pets.

Don’t expect them to be as affectionate as domestic cat breeds, and their playtime may involve destroying your household items as they jump around.

But it’s possible to “tame” them and form a bond with them.

They’re not ideal for households with small children or smaller domestic cat breeds.

Like all other exotic cat breeds, expect to pay a hefty cost to purchase them and maintain them.

The Sokoke is an African breed that’s naturally a domestic cat.

The Sokokes were developed from a feral cat named khadzonzo.

According to Cat Fancy, Jeni Slater, a local Kenyan farmer and horse breeder, discovered this cat breed in Lamu, a region on the Kenyan coast where the Arabuko Sokoke National Forest is located (hence the name Sokoke), in 1978.

But these cats had been in this region for longer than that. Standardizing of this breed to the Modern Sokoke started around the same time.

Sokoke’s have short tabby coats, a medium-sized body, and longer hind legs. They are pretty rare and not suited for very cold climates.

The African Golden Cat is one of the African cat breeds that thrive in rainforests, mainly in Central Africa and West Africa rainforests.

Their coat color ranges from various shades of brown and black.

Some are spotted throughout the body, while others are only spotted only at the inner legs and the belly.

They’re also considerably large (twice as large as a domestic cat), with a body length of up to 40 inches and a shoulder height of up to 22 inches.

Since they prefer areas with heavy undergrowth, trees, and dense vegetation, deforestation and hunting threaten their existence in various parts of Africa.

African Golden cats are not the best climbers, but they’re excellent ground-level hunters who can hunt large animals such as antelopes, monkeys, hogs, and duikers.

When they’re not hunting large mammals, they also prey on medium-sized birds and rodents.

The Sand cat is unique since it’s the only African cat breed that prefers the desert environment.

They were first discovered in the Sahara desert, but they’ve spread out across the Arabian deserts, Gobi deserts, and many other deserts in Africa and Asia.

They have a pale coat, a flat head, a medium-sized body, a thick coat, padded paws, and weigh up to 8 pounds.

Sand cats are also referred to as Sand dune cats due to their ability to dig holes in the sand.

They prey on a wide range of animals, including venomous snakes, sand monitors, rodents, and sandfish.

And lastly, we have the Jungle cat.

Jungle cats are mainly found in Asia and the Middle East, but in Africa, they only exist in Egypt.

Mummified Jungle cats found in Egyptian tombs signify that this cat was once a domestic cat in Ancient Egypt.

Even though it’s known as a Jungle cat, this cat breed prefers swamps and other wet areas. That’s why they’re also named swamp cats or reed cats.

Their coats have a solid color which may be gray, sandy, or brownish.

They can grow up to 30 inches in length, and they can weigh up to 40 pounds.

Unlike the other wild cats in this list, Jungle cats are diurnal, which means they’re active during the day, and less active in the evenings and at night.

Different cat breeds need different levels of care. Based on my list, only one of the African Cat breeds is domestic, the Sokoke cat breed.

The rest are exotic breeds, and only the Serval and Caracal cats are known to be kept as pets.

Sokoke cats are friendly, don’t shed much, and need regular grooming like any other domestic cat.

The Serval and Caracals need a special diet of whole prey, they need ample open space to roam around, and they often don’t respond to petting.

If you happen to get any of these breeds, make sure you get the relevant information about their health, diet, and activity needs from the breeder.

Are there domestic cats in Africa?

Yes, there are. Africa is home to a wide range of both local domestic cats, feral cats, and wild cats. A good example is the Sokoke Forest Cat which was standardized from local cats in Africa. Most domestic cats spread out across the world are also believed to have originated from Africa.

What is the deadliest cat in Africa?

The black-footed cat is the deadliest cat breed in Africa, with a hunting success rate of up to 60% and the ability to kill more than ten animals in one night. They are mainly found in southern Africa.

What is the biggest African cat?

Lions are the biggest cats in Africa, weighing up to 400 pounds and a body length of 82 inches. Other large cats in Africa include the leopard and the Cheetah.

What is the smallest African cat?

The black-footed cat is the smallest cat in Africa, weighing just 2kg and a 20-inches body length. Even though they are tiny, they’re still the deadliest cats in Africa.

And there you have it. These are the little-known African cat breeds. You realize that you can’t adopt most of them, and those that you can need special care.

But they’re fascinating in their own right, and even though they’re slowly becoming extinct in some regions, they’re the ancestors of the domestic cats we have today.

What do you think of these African cat breeds? Share your thoughts below!