Do Cats Hold Grudges? Here’s What Your Feline Has to Say! 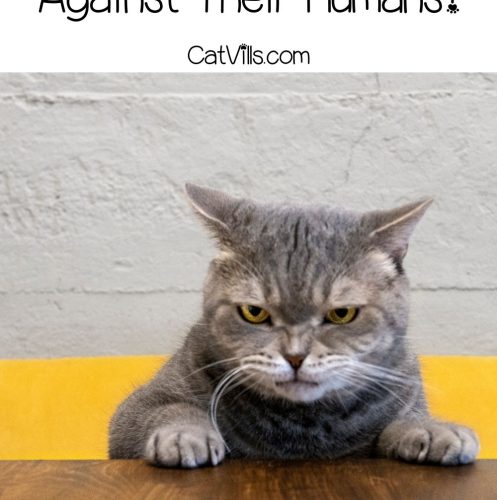 Dear Human, I hear you’re asking about whether we cats hold grudges!

Maybe you read about Garfield the cat may and his famous temper, and saw how he shows his human, Jon Arbuckle, his displeasure?

While he may throw an occasional fried egg at Jon’s face though, has Garfield ever really held a grudge towards Jon for not giving him lasagna?

Allow me to answer that for you!

Hey, human! Do you remember when?…

Maybe, it all starts with memory. And then, maybe not. You humans hold grudges because you remember something that has happened in the past. You never forget so all these emotions start to come rushing in.

Luckily, for you humans we cats too can remember — but only for a short time.

An experiment conducted in 2006 showed exactly that. We couldn’t remember where our food bowls were once they disappeared from our sight!

Kittens are even worse! LOL! This is probably the reason why we even have a hard time looking for those mice once they disappear into some hole in the house.

Results from an experiment published in 2008 though showed that we cats do better when it comes to spatial memory.

In this experiment, cats could easily remember what food bowls they had eaten from in a given space. It did show, too, that this ability seemed to decline with age.

Despite results from studies though, there still is a lot to be learned about a cat’s memory.

Many cat humans will attest to how their cats remember the vet, or even simple things such as mealtime. For some reason, we do remember our food. (Think Garfield waking up Jon for his breakfast!)

Check: How to Tickle Cats

It’s not a cat grudge! It’s a panic attack!

So maybe it’s not a cat grudge but instead, a panic attack.  Animals, particularly pets, do get anxiety attacks. In fact, many pet owners have witnessed their pets getting anxiety-related behavior problems.

As much as 60 percent of pet owners report weird pet behavior attributed to stress and anxiety. Felines are not an exception. Yes, we cats do get anxious.

Some cats take time getting familiar with surroundings that are unfamiliar to them. It also takes some time for certain breeds of cats to get familiar with new faces as well.

Introducing a new family member to us may make us aloof towards our human family. Don’t even get us started with the new pet dog.

Going to a new place may give us an anxiety attack as well. So it may not all be credited again to memory.

Stress and anxiety play a huge role in our feline behavior. Even separation anxiety has been reported in cats. In other words, it’s all about routine.

So if we felines start to act catty, you can blame it on stress that may have been brought about by unfamiliarity. (Or dislike? Remember, Garfield has always hated Nermal.)

And c’mon! Let’s face it! Who likes going to a doctor’s office to receive shots? Can you blame us cats for not wanting to see the vet??

Some of our brain parts are similar, so…

A study from Tufts University School of Veterinary Medicine has shown similarities in the structure of both human and cat brains.

While a cat’s memory may still be something to question, we cats are definitely smart. It’s also because of our brains that we get to learn behavior based on what we see. (Hey! I’m writing you this letter, ain’t I?)

Given these similarities, it could be possible that what you think of as a grudge is behavior that mimics that of a human.

This may give room for misinterpretation which may make a human think that this is all part of some cat grudge.

Cats learn from what we see. This means that we will mirror what we see in our humans.

When our humans feel stressed and anxious, it could be possible that a cat may mirror this anxiety as well. This mirroring may again be mistaken for a cat grudge.

(Again, think about how Garfield gets stressed out about Jon looking stupid on a date.)

While we cats may seem aloof, we do love our humans a lot. It’s just us being catty and it has nothing to do with a cat grudge.

A study in 2019 has revealed that cats actually form bonds similar to how dogs form bonds with their humans. Cats do seem to see their humans as a source of safety and security too.

So maybe, it’s really not a cat grudge. Instead, it all goes back to that routine that we have become familiar with. A routine that involves you.

Check: How Do Cats Smile?

So, human! Let’s forget about it!

So do we cats actually hold a grudge for every little mistake that you make?

While we may feel displeasure for you forgetting to make our supper, we do tend to forget about it. Why sweat out the small stuff when we can just pester you while you’re all snuggly in your bed?

And, no. It’s not a grudge when we start misbehaving in your car on the way to the vet. First of all, it’s a car ride. We’re not used to all that movement, especially when we’re stuck in the house or apartment living room 24 hours, seven days a week. And again, who likes going to the doctor to get poked and pricked? When everything is new, we do get stressed. Don’t you too?

We cats like our boring lives. We like going on our daily routine of snuggling and rubbing our tails against our legs. Our lives depend on you and we feel safe because of you.

So if on occasion, you start seeing us acting differently, it may not all be about you and what you did. It may be just we have to get used to a new setup. Don’t worry. We’ll get over it in time.

PS: Now that we have all of this cleared up, can I please get my food? It’s pretty late and I’m hungry.

What do you think about our expert feline’s answer? Do cats hold grudges? Share your thoughts below!