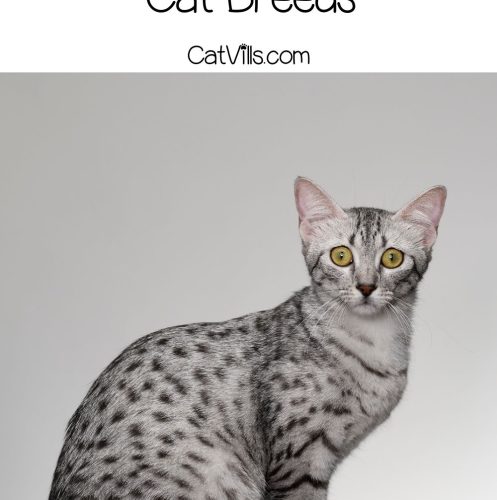 Once upon a time, that list may have been VERY long!

Today, though, there are only a handful of modern cats that find their immediate roots in Egypt.

So join us as we look at six modern breeds that can still call Egypt their homeland.

Cats have long been an internet phenomenon, but our adoration of them goes back thousands of years before the advent of the cat video. One of the civilizations that comes to mind in this regard is Egypt.

If one were to associate any single animal with Egypt and its great history, it would have to be the cat.

Modern scientific research studying DNA and ancient Egyptian artworks suggests that the relationship between Egypt and modern house cats runs deeper than we had imagined.

In fact, the common ancestor of the house cat seems to have originated in ancient Egypt!

While many other lists also include extinct breeds and wild cats, today there are only six breeds left that we can truly call Egyptian cat breeds. Let’s check them out!

The first entry on our list makes a timely appearance. Its status as an Egyptian breed is currently up for debate, as DNA evidence suggests links to breeds from South East Asia.

Currently, there is no consensus, and the Abyssinian still enjoys its status as an Egyptian cat.

The Abyssinian is a medium-sized breed known for its agility. As with other breeds on our list, the Abyssinian comes in a variety of colors and patterns.

It is a gorgeously sleek breed with a striking profile. It is not, however, a cat for the sedate cat lover seeking a relaxed kitty companion.

The Nile Valley Egyptian cat is a relative newcomer to the ‘official cat breed’ club. In fact, it’s hard to even find pictures of them online!

Yet, curiously, they may also be the oldest surviving domesticated cat breed by some margin. Considered by some to be native Egyptian Maus, the Nile Valley Egyptian cats are essentially stray feral cats.

Their bloodline has remained relatively pure compared to their ancestors. That led to the breed being recognized as an experimental breed by the ICA in 2010.

The cats were originally the focus of a massive rescue mission, as the Egyptian government planned their eradication.

The Nile Valley Egyptian cat comes in two varieties. One is long-haired and one short-haired. They have a distinct mantle that runs along their body. The ‘mantle’ consists of areas that differ in pattern from the rest of the coat.

They can sport many combinations of colors and patterns. The breed has a dedicated charity that supports no-kill animal shelters in Egypt.

The Chausie is an altogether remarkable breed of cat.

Not only is it often genuinely allergic to gluten, unlike most mammals, it is also the result of pairing a wild cat and a domestic breed.

The appeal is apparent—the striking looks of a wild cat with the temperament of a house cat. Unfortunately, most attempts at this kind don’t result in a particularly amicable kitty cat.

The Chausie is different, though. The name comes from the Latin name for the wild half of its heritage: Felis chaus. Felis Chaus is a jungle cat native to the Nile Valley and parts of South Asia.

The resulting Chausie cat is everything one could want to be—a well-tempered cat with uniquely ‘wild’ features.

It is a large breed, weighing up to 24lbs. The coat is usually brown-ticked tabby, black or grizzled black.

One of the breed’s most charming features is that they rather enjoy playing in the water, unlike most cats. A Chausie will swim for sheer delight rather than just as a last-ditch effort to cross a body of water.

Another unique breed, the Egyptian Mau, is arguably the best-known modern Egyptian cat breed. It is also the star of many viral videos, with a bit of an internet celebrity status.

The breed comes in two ‘sub’ breeds; the formally recognized show breed and the common, or ‘original’ Mau.

The show breed is the iconic and popular internet cat. It is the result of European line breeding. This Egyptian Mau is silver, bronze, or smokey.

They have distinctive markings all over the coat and tabby stripes on the face and extremities.

The common Mau can sport various colors but lack the markings that are characteristic of their showier cousins.

Both Egyptian Maus share the majority of their characteristics. They are a medium-sized breed, short-haired, with big ears and striking green eyes.

In addition to its fascinating dual-breed and iconic looks, the Egyptian Mau is possibly the fastest member of the domestic cat family, clocking in at top speeds of 30 miles an hour at full sprint.

The Shirazi has a history as steeped in legend as that of the country from which it hails. It is difficult to separate fact from fiction, but according to legend, it is an ancient breed that arose from Persia’s invasion of Egypt.

According to the tales, the mixing of Persian cats with the local Egyptian Maus gave rise to the Shirazi.

The breed is a mix of the two breeds. That much is for certain. Therefore, this origin story is plausible, if not entirely substantiated.

The Shirazi is not recognized formally as a breed of its own. That is peculiar for any breed that has been around for millennia.

That may correspond with a lack of popularity among locals who view the breed as a street cat. For this reason, they are the focus of charitable kitten rescue programs.

They are a medium-sized breed, bearing traits from both of their parent breeds. From its Persian parentage, the Shirazi gets its long, thick coat. Its Mau ancestry is evident in its markings and striking eyes.

The Shirazi is not as spirited as its Mau parent breed, making it more appealing to cat owners looking for a more manageable pet.

The Savannah cat is not an exclusively Egyptian breed, but many of the popular variants, those commonly recommended by many an animal behaviorist, result from breeding the wild Serval with Egyptian breeds such as the Mau and the Chausie.

The breed of domestic cat used in breeding the Savannah cat plays an enormous role in its looks and temperament.

The Chausie is particularly popular as a parent breed for the distinct markings that such offspring will have.

The Savannah cat requires socialization to condition them for domestic life properly. Left to their own devices, especially as kittens, the Savannah cat is inclined to adopt the characteristics of its Serval parentage.

Check these Egyptian names for cats!

Cats play an integral role in the history of ancient Egypt. Many people believe that the ancient Egyptians worshipped cats as gods.

While this is not the case, it is understandable given how prominently cats feature in ancient Egyptian arts and culture.

Large cats roamed the wilds, while smaller cats found a home amongst the Egyptian people. First as scavengers, then as revered companion animals sharing in the comings and goings of daily life.

The ancient Egyptians admired these new breeds that began to differentiate from the cats of the wild.

They saw virtues in their dual nature that mirrored those of their gods, and eventually, cats came to represent symbolic depictions of those very same gods.

The few truly Egyptian breeds of cat that remain are one part remnant of an era of symbolism, one part living history. Until recently, we believed that the first domestication of cats took place in Egypt in 3100 BC.

While this may no longer be the earliest record of humans domesticating cats, it may be the most important in shaping the role that cats would come to play in the modern world.

What do you think of these Egyptian cat breeds? Let us know in the comments below!