What Breed of Cat is Garfield? 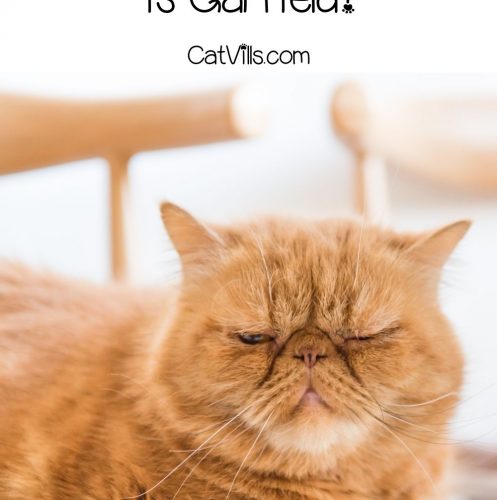 The famous comic strip character created by Jim Davis, has gotten many people curious as to whether a Garfield cat breeds really exist.

Just exactly what kind of cat is this iconic kitty?

Do his breeds (yes, breeds, he’s more than one as you’ll see below) make good household pets?

Keep reading for all of these answers and more!

What Kind of Cat is Garfield?

According to Garfield creator, Jim Davis, this fictional feline is a composite of different kinds of breeds. However, Garfield, the cat is more associated these days with a Persian breed known as the Persian Tabby.

That said, there are actually a bunch of other orange tabbies that can be considered as a Garfield breed. Let’s take a look.

The Tabby Persian cat is probably the one that is most associated with the fictional feline among all types of cats that can be considered as a Garfield cat breed.

This breed of cat was developed through years of experiments that ultimately resulted in a fluffy feline with a cute face.

Persians are considered to be one of many short-ear cat breeds. Their ears, along with their round face and short muzzle give them that perfect Garfield look!

Unlike the character in the comic strip, the Tabby Persian has quite a sweet personality. They can be quite laid back and, in fact, likes being shown affection by their human owner without being too needy or clingy.

The breed can be quite choosy with whom it likes to be with, though, pretty much like how Garfield often chooses Jon Arbuckle as his constant companion.

This breed is actually another type of Persian cat breed, this time a short-haired version. The thick and soft fur coat makes them quite huggable. It also is an expensive cat breed that is usually priced anywhere between $1500-2500!!

These kitty cats appear to be heavily boned but with well-balanced body structures. Their faces are usually around and almost cherubic.

Added to this are their large eyes that are set wide apart to complete that innocent, sweet look.

Unlike other Persians, this breed can be quite playful without carrying their playfulness to an extreme. Although they are more active and playful than their Persian relatives, they generally still have a calm temperament.

They enjoy most of their day lying in one corner of the room or sitting on their human’s lap. They can be quite devoted to their adopted humans.

This type of cat can be quite a loyal companion that will follow his human wherever he goes. It can shower his human with lots of affection too whenever he receives the attention and cuddles that he needs.

British shorthair cat breeds used to be known for their bluish-gray dense coat although nowadays, their coat color now comes in a variety of combinations.

This is a popular cat breed known for a rounded head and cute, chubby cheeks which makes them look like a cuddly teddy bear.

In terms of personality,  this breed has an affectionate personality without being too clingy. In fact, maybe it’s the British in them that makes these cats quite reserved and quiet.

They rarely like being cuddled nor carried. They would rather stay by the feet of their humans due to their reserved and independent nature.

Once they get past their reservations though, they can be extremely loyal and faithful feline companions.

Unlike Garfield, who seems to see poor Odie the dog as his arch-nemesis, the British Shorthair can easily get along with anyone in the household, including other common household pets.  Yes, that includes your dog!

The Maine Coon gets its name from Maine, USA where it first originated. They’re quite popular among American cat lovers.

Maine Coons are considered to be one of the largest breeds of cats. They usually weigh anywhere from 6-11 kgs and can reach up to 16-inches tall.

For domesticated house cats, they can be quite long reaching up to an average of 38 inches in length.

They are big ear cat breeds with their ears sitting high on their heads. Their ears are quite large in width at the base which continuously tapers as they reach the tip.

The Maine Coon has a thick and shaggy coat. Along with its size, this pet cat breed is one of the most huggable there is.

Despite its size, the Maine Coon has a gentle personality which makes it a perfect match for kids. It is an intelligent breed and it can be trained to follow commands, pretty much like dogs.

Unlike other cats, this breed seems to enjoy water so giving a bath is not a problem with these gentle giants.

Check: All About the Tabby Maine Coon Cat

If this cat were colored gray, you could probably consider this breed as the live version of Garfield’s cat nemesis, Nermal.

Munchkins, as their name implies, are small cats with thick but well-rounded chests, medium-sized bodies, and short legs. They have walnut-shaped eyes that are widely spaced.

Their ears are wide at the base and although they taper, the tips are rounded rather than pointed. They may have either short or long silky hair.

Munchkins can be very playful and active, capable of forming strong bonds with their humans through constant interaction with them.

They are quite affectionate and friendly, despite their mischievous character. Although they are pretty playful and active, don’t expect to see much climbing from this breed due to their short legs.

The short legs though do not limit their activity as this breed can be pretty agile and quick. At the end of the day, after all the play, they do like to cuddle up to their humans and end up in their chosen human’s lap.

American bobtails have long coats that are silky in texture. They have medium-sized heads, almond-shaped eyes, and short tails giving them a gorgeous appearance. Their coats come in a wide combination of patterns and shades.

Just like Munchkins, American Bobtails too can be quite intelligent, playful, and energetic. They, too, can be quite friendly even to strangers and other household pets. (Yes again! It can get along with the pet dog too!)

They also are very loyal to their adopted humans, forming deep bonds with those whom they choose to associate.

These types of cats carry with them a graceful look due to their fine and silky coat. They come in a wide range of colors, including the orange color that is associated with Garfield.

Unlike Garfield though, their bodies can be long and muscular, which adds to that graceful look. They also have heads that are small and round, with ears that are quite a wide set.

The almond eyes can come in different colors too — paired blue-amber or blue-green!

Turkish Angoras can be quite active and they prefer to stay in high places.

Although gentle in nature, Turkish Angoras seem to be set in their opinions. They can be quite insistent with what they want that you can rarely win an argument with this feline friend.

In other words, they like to be in control of the situation. This doesn’t mean though that they aren’t capable of affection. They can be affectionate but a bit more reserved than the others on the list.

They can also be very devoted companions as well. Angoras develop a great sense of loyalty to the family that has adopted it, but it does have the tendency to be more devoted to the member that showers him with the most affection.

The Bengal cat may take on the features of a wildcat, but its temperament is pretty much that of a domestic housecat. It has a muscular body covered with a thick, orange coat that has black spots or stripes. This makes it one of the most beautiful domestic, distinct breeds of cats.

The Bengal cat is a very active and playful cat. Its muscular body makes it easy for them to get to pretty high places, which is where you can usually find them. They also are quite intelligent and curious. You can easily teach them a number of tricks, that is if they haven’t learned the tricks by themselves. Bengal cats are quite friendly so they immediately get along with humans.

They are quite fun-loving but are pretty devoted and loyal to their adopted family. They do like seeking attention and that is what you have to give to them in order for you to gain their unswerving loyalty. Attention, however, doesn’t mean that they love being cuddled. Bengals treasure their freedom quite a bit so restraining them in a hug can be a source of irritation for them.

For you, what kind of cat is Garfield? Share your thoughts below!