Curious about the Kinkalow cat ?

Want to learn about this powerhouse breed kittens?

From temperament to behavior, read this extensive review guide!

The Kinkalow cat breed can best be described as small but mighty.

Its energetic, outgoing nature and super cute look make it a cat breed that is gaining popularity in both homes and on social media platforms.

If you’ve fallen in love with the Kinkalow cat, read on to find out all about this wonderful little breed.

We’ll be talking about its history, health, care, personality and more so dive in and learn everything you’ve ever wanted to know about the Kinkalow. 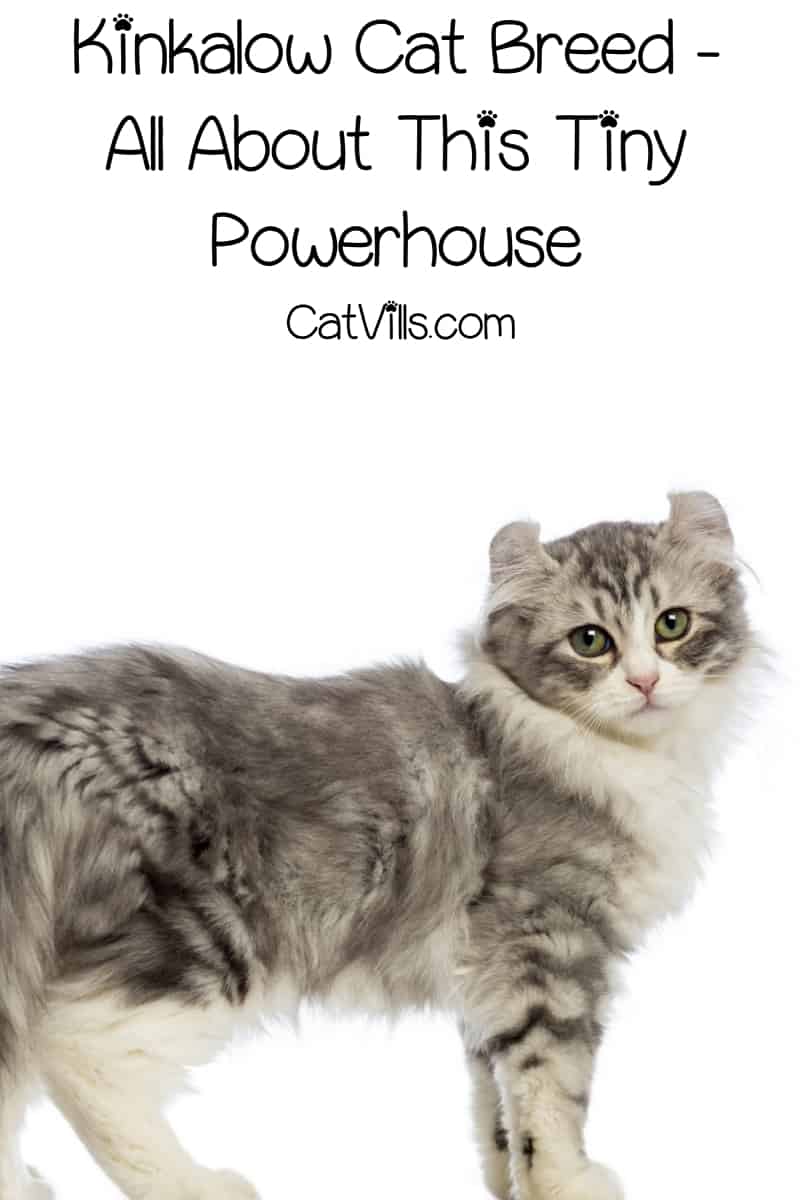 Classified as an exotic and rare breed, the Kinkalow is a relatively new breed.

Its origin dates back to the mid-1990’s when American breeder, Terri Harris, began crossing Munchkins with American Curls to see what would happen.

Her hope was to achieve a breed that took the best parts of both the Munchkin and American Curl and combine them into one breed that showcased them.

It was a huge success. During that period, the modern Kinkalow was born, creating a dwarf cat featuring adorable short legs, curled ears, and a personality far, far bigger than its tiny frame.

The Kinkalow is a cross between the Munchkin and the American Curl, and as such, both its physical traits and personality traits are adorable.

Let’s take a look at what makes these little guys and girls so great.

It’s easy to see the Kinkalow’s heritage when you look at it.

The Kinkalow has an outgoing personality that is far, far bigger than its stature.

Fun fact: these cats are so smart and energetic, they are often taught to play fetch.

Like any cat, the Kinkalow requires regular preventative healthcare as well as proper grooming to keep it in tip-top shape.

Kinkalows are dwarf cats and as such, their spinal health is always a concern.

Generally speaking, the Kinkalow is a long-lived cat, with a lifespan that is longer than most. They average over 15 years. This makes it a good pet for families with young children.

Kinkalows are a low-maintenance breed when it comes to grooming.

All they need is a good brushing once a week, a bath every so often, and regular nail trimming to keep them looking good.

In point of fact, if you start your grooming routine early, your Kinkalow will grow to love it, especially the brushing.

All that one-on-one time is a Kinkalow’s bread and butter when it comes to human interaction.

Kinkalow Cat Price & Where to Find Them

If you’ve decided that this is absolutely the right kitty for you, then all that’s left to do is find one!

First, it’s good to know if they’re even in your budget, so let’s start there.

How much do Kinkalow cats cost?

Prices vary depending on the breeder, where you live, and current availability of kittens versus how many people are looking for them.

However, expect to pay around $2,000- give or take- for a Kinkalow kitten.

No, that’s not a typo. I didn’t accidentally add an extra 0. That’s two thousands dollars.

Still want one? Let’s talk about where to find them.

Where to find a Kinkalow cat for sale

There are SO many homeless cats out there right now that deserves a forever home.

That said, since Kinkalows are such an expensive designer breed, it’s rare to find purebred kittens (or even adults) in shelters.

So, if you have your heart set on one and you’re willing to spend the dough, your best bet is through a reputable breeder.

We don’t recommend specific breeders here, so I recommend searching “Kinkalow kittens near me” and going from there.

#tbt to the first day we picked up Minnie. We bought a huge crate to bring her back home in but the owner told us to just hold her cause she will sleep right in your hands the whole ride, and she did. Literally love at first site and one of the best days of my life. ???

With a highly intelligent, affectionate, and energetic demeanor, adorable look, and low grooming requirements, the Kinkalow makes a great pet for almost any family.

All it takes to have a long, happy friendship with your Kinkalow is routine vet visits, regular grooming, and lots and lots of play time.

This is a breed that fits into almost any environment that features lots of love and attention for this furry little friend.

Do you have a Kinkalow cat? Share your thoughts and experiences below!