4 Popular Cat Breeds That Start With B 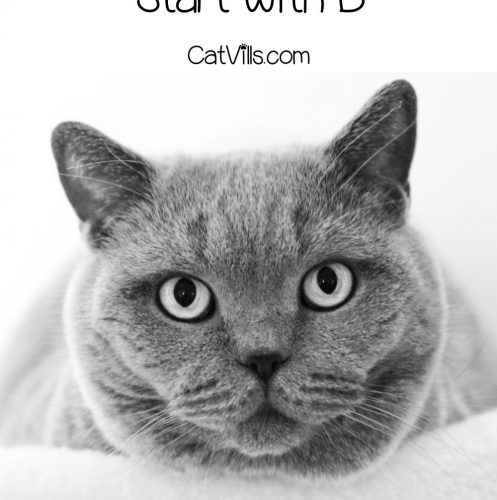 Curious to know about popular cat breeds that start with B?

We’ve got you covered!

Some of our favorite felines happen to have names beginning with the second letter of the alphabet.

Check out the table below for a quick look, then read on for in-depth details about the most popular breeds.

Most Popular Cat Breeds That Start With B

Cat breeds that start with B are quite popular.

I guess it’s because of the powerful sound of the letter “B,” or the fact that names associated with wealth or sharing one’s wisdom (Being, Billionaire, Brain) all start with the letter.

Whichever the case, let’s look at some of the most popular cat breeds starting with B, their origin, traits, and their health issues (if any).

If you’re looking for a cat with a wild-but-friendly look, you will fall in love with the Bengal.

The Bengal cat originated in the USA when Jean Mill attempted a cross between a domestic cat (black Californian Tomcat) and an Asian Leopard Cat (a wild cat).

The aim was to come up with a domestic cat that resembled a wild cat.

It’s a relatively new breed since The International Cat Association (TICA) officially recognized it in 1983.

The lifespan of a Bengal cat ranges from 12 to 16 years. They’re pretty healthy, and they didn’t inherit any defects from their parents.

However, older Bengals are more susceptible to a heart disease known as hypertrophic cardiomyopathy than other cat breeds.

Bengal cats are known for their elegance, being energetic, and friendly.

They are also quite curious, so don’t be surprised when you see them climbing up trees, furniture, and other elevated areas.

Bengals are quite talkative, So if you’d love a companion who you can converse with when you’re bored, you should consider this breed.

Their bodies are well-built, and they have distinctive marbled or spotted coats.

And since they have short hair, they don’t require unique grooming routines – just regular brushing, parasite control, and vaccination.

Have you ever heard of black cat breeds?

Well, the Bombay cat is the only cat breed where all cats have a black coat. They don’t come in patterns, tabby, or any other differently colored coats.

Given the name, you may think that this breed originated in India, but that’s not the case.

The Bombay cat actually originated in the USA when a Kentucky-based breeder, Nikki Horner, tried to create a domestic cat that looks like the Black Panther.

She did this by crossing the American Shorthair and the Burmese cats. After some attempts, she succeeded.

So, why the India-inspired name? Horner chose it for Bombay city in India, where Black Panthers are commonly found.

Bombay cats have a lifespan ranging from12 to 16 years. They are some of the healthiest cats, and they’re not associated with any health issues.

When they’re young, Bombay cats are playful, curious, and have lots of energy. They’ll climb up stuff and chase around toys.

Are they affectionate? Yes. But sometimes, they can be too demanding of their owners.

They are also referred to as lap cats since they will often come up to your lap regardless of what you’ll be doing at the time.

However, as they age, Bombay cats become less active.

Check: BLACK CAT BREEDS WITH BLUE EYES: DO THEY EXIST?

While the Bengal and Bombay cats are crossbreeds, the British Shorthair is a pedigree cat, and it has been around for a very long time.

The British Shorthair dates back to ancient times, and it’s one of the oldest pedigreed breeds in the UK.

The Romans used these cats for pests and rodent control.

They naturally interbred with other cats and adapted into large cats with thick coats and a muscular build.

But selective breeding with these cats didn’t start until the 19th century, which resulted in the blue-grey color, also known as the “British blue,” and the orange eyes.

This breed’s lifespan ranges from 12 to 17 years.

However, they are susceptible to heart issues such as Hypertrophic Cardiomyopathy.

Also, they may have been crossed with Persian cats at one point. Since Persian cats are affected by polycystic kidney disease, some British Shorthairs may be affected too.

Before adopting the cat, make sure you inquire with the breeders about the history and genetics.

British Shorthairs are a laid-back cat breed, affectionate, easygoing, and they’re not too demanding of their owners.

They’re not curious, they’re not climbers either, and you’ll rarely find them lost or stuck in their adventures.

While you can play around with them, they don’t like being lifted off the ground.

British Shorthairs prefer to be kept as indoor cats, but since they are prone to obesity, always schedule some time for physical activity and watch their diet.

The Burmese cats are believed to have originated from Burma.

The mother of the American Burmese cats was a cat named Wong Mau, brought to the United States in the 1930s.

The modern-day Burmese is a cross between the original Burmese and the Siamese cats.

However, due to the USA and Britain’s different breeding techniques, there are two versions of the Burmese – the American Burmese and the British Burmese.

While the original Burmese cats were deep brown, they are now available in different colors.

The lifespan of a Burmese cat ranges from 15 to 17 years. The British Burmese cats are more susceptible to diabetes mellitus compared to the American Burmese.

As mentioned earlier, they are bred differently. Feline Orofacial Pain Syndrome (FOPS) and Hypolakemia are other diseases that have been reported in the British Burmese.

According to Veterinarian Joan O. Joshua, Burmese cats form a “dog-like” attachment to their owners.

The younger cats are also quite active and energetic. They’ll enjoy a game of tag or fetch with their owners too.

They also can be quite vocal, especially when demanding attention. And they’ll not quit until you give in. But they become less active as they grow older.

But some may have blue or yellow eyes. They indulge in self-grooming, but you can occasionally brush their cat as you pet them.

Several cat breeds start with B; you just have to select one that matches your lifestyle.

And if you’re looking for names for cats beginning with B, you can name your cat with some of these nature-inspired names – Bear, Birch Bjorn, Buck, or Brier.

What do you think of the cat breeds that start with B? They are so adorable, right?