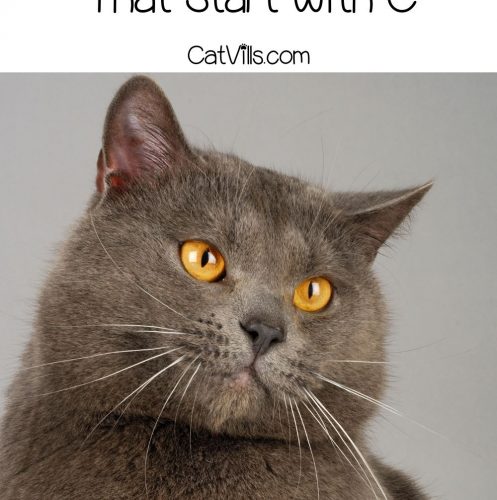 Are you looking for cat breeds that start with C?

For some people, the letter C stands for child-like, clarity, confidence, or charity.

In comparison, others love the letter C since it matches their name..or for no reason at all.

Whatever your reason, check out the most popular breeds along with their personality and life span.

READ MORE: Most Expensive Cat in the World

Cat Breeds That Start With C

One of the few cat breeds with little to no fur, the Cornish Rex makes a good pet for families thanks to their lovable personality traits.

The first Cornish Rex was found in Cornwall, England, in the 1950s, when a cat named Serena gave birth to a litter of kittens.

Among the litter was a male kitten with a short curly coat and a unique slender body.

A genetic mutation caused the unique characteristics. The owner named him Kallibunker, and he became the father to all the Cornish Rexes we have today.

Backcrossing Kallibunker with his mother resulted in two cats with curly coats – a male kitten named Poldhu and a female.

The first Cornish Rex in the United States was a female called Lamorna Cove, and the male kitten, Poldhu, sired her.

Lamorna Cove was crossed with a Siamese, explaining why Cornish Rexes have large ears.

They are some of the healthiest cats, but there are many reports about them being affected by Patellar Luxation and hypertrophic cardiomyopathy.

Due to lack of hair, they are also more susceptible to sunburn. Avoid leaving them outdoors for too long.

Cornish Rexes are characterized by a lack of hair. All they have is down hair which appears to be curly.

Their bodies are slender, and they run as if they’re galloping. That’s why they acquired the name, Greyhound of the cats.

Also, the mutation that causes the Devon Rex appearance is different from the one in the Cornish Rex.

Cornish Rexes remain playful, curious, and kitten-like all of their lives. They’ll enjoy racing, acrobatics, and even playing fetch.

They are also quite affectionate and love spending most of the time with their owners.

If you’re a fan of point-colored cats, then you’ll love that the Colorpoint Shorthairs come in up to 16 different point colors.

The Siamese point colors inspired breeders. However, since there are only 4 Siamese-style point colors, breeders wanted to come up with more.

Several cat breeds were involved in these experiments, including the Abyssinian, red domestic Shorthair, and the American Shorthair.

After several tests, the crossing with the American Shorthair was prevalent.

The Cat Fanciers Association (CFA) recognizes the Colorpoint Shorthair as a breed, but other registries recognize it as part of the Siamese breed.

The Colorpoint Shorthairs’ lifespan ranges from 12 to 16 years. However, they are affected by the same health conditions that affect the Siamese cats.

These include dental issues, eye issues, amyloidosis, asthma, other breathing issues, and heart issues such as congenital heart defects.

Like other point-colored cats, they’re pale on parts of the body, but the colors get darker towards the feet, tail, and eyes.

Some of the point colors of the Color Point Shorthair include;

Colorpoint Shorthairs are affectionate, playful, and intelligent. They’re also quite vocal, especially when they need attention from their owner.

Just like the Siamese cats, they have up to 100 different vocalizations, so don’t be surprised when they make some unusual sounds.

Male Colorpoints can be quite aggressive, especially when they sense an intruder.

Check: Can You Train a Cat to Walk on a Leash?

It’s fascinating how some cats can resemble wild cats such as lions, cheetahs, and leopards.

Some may resemble them naturally, while others are bred to look like these wild cats.

The California Spangled is the latter.

This breed dates back to the 1980s as an attempt to prevent leopard poaching.

Paul Arnold Casey, The Author of the Open the Coffin Chronicles, was inspired by world-renowned anthropologist Louis Leaky to breed a cat that resembles the Ocicat and the Leopard.

According to them, when people saw a cat that resembles the wild cats in their houses, they would refrain from wearing clothes or purchasing ornaments made after killing them.

Several cat breeds were involved in the breeding, including the Abyssinian, British Shorthairs, and American Shorthairs.

The lifespan of a California Spangled ranges from 10 to 14 years.

They’re generally healthy, and, currently, there are no health issues associated with them.

However, keep in mind that all cats may develop a health condition as they age, regardless of the breed.

This cat breed looks like a small Leopard. They feature a well-built lean body and dark spots that come in different shapes.

Despite the wild look, California Spangled cats are friendly, devoted to their owners, intelligent, and curious.

They enjoy playing fetch and are very good at hunting. And just like the real Leopard, you might find them perched on elevated areas.

The striking “smile” and the Chartreux cats’ quiet nature make them good pets for those looking for a calm companion.

It’s not clear where the Chartreux cats really came from. Some associate them with the Carthusian Monks.

And the cat may also have been depicted in the Magdaleine Pinceloup de la Grange painting.

But one thing’s for sure. This breed was found in France as early as the 18th century. They were also known for their hunting and rodent-control prowess.

However, selective breeding of these cats only started after World War II, and the first Chartreux cat came to the United States in the 1970s.

They’re still a rare breed today, but most registries worldwide recognize them.

Did you know that for every pedigreed cat in France, the first letter of its official name shows the year it was born?

This means that cats born the same year will have names starting with the same letter, with the exception of the letters K, Q, W, X, Y, and Z. Kittens born in 2021 start with an “S”.

The lifespan of a Chartreux cat ranges from 12 to 15 years.

They’re generally healthy cats, but some of them may develop Patellar luxation, which is a kneecap dislocation.

Chartreux cats are huge, muscular, and swift. They have a blue (silver-grey) water-resistant coat, copper-colored eyes, and a “smiling” face.

They’re rarely aggressive to people or other pets. They aren’t so demanding for attention.

And when they’re not playing, they will be napping on your couch or even on your bed.

Related: 4 Popular Cat Breeds That Start With B

And there you go. Among the cat breeds starting with C, some are talkative, some are calm, some are outdoor lovers, and others are more suitable for being indoors.

And if you’re interested in cat names that also start with C, here are some suggestions;

What do you think of cat breeds that start with C? Share your thoughts with us!

My name is Ben Roberts, and I absolutely love animals. So, naturally, I love writing about them too! As far as my animals, I have a Pit-bull, a Beagle-lab mix, a Chihuahua, and one old cat. Each one of them provides me with a new adventure every day. And the best part is they’re all best friends. Well, except the cat when he gets a little annoyed. Learn more about Benhere
FIND HIM ON: FACEBOOK AND TWITTER.
Read his latest ARTICLES