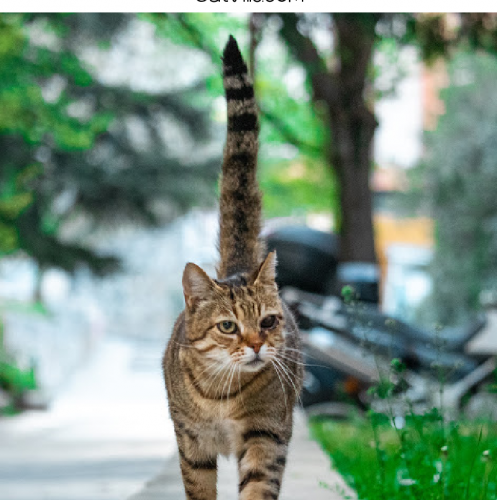 Feline tails come in all shapes and sizes, but today we’re going to look specifically at cats with thick tails.

Fluffy or muscular, all of the breeds on this list have thick tails, and they know how to use them.

An essential element in reading cat body language, we’ll also look at how a cat uses its tail.

Persians are amongst the most popular cat breeds out there.

Indeed, they are known for their distinctive flat faces and long flowing coats, and we have traced them back as far as the 1600s.

Persians are quiet, gentle cats that can be high maintenance in terms of grooming.

The Persians’ long fur only serves to make their thick tail look even denser than it already is.

Considered one of the largest cat breeds, it should come as no surprise they feature on our list of cats with thick tails.

Their long tails are covered in long, thick, bushy fur, making them a sight to behold.

They may well have the thickest tails of all the breeds in this article.

The American Curl is a distinctive breed, easily recognized by its unusual ears.

Their ears curl back and bend in towards the middle of the head.

The bend is caused by a random genetic mutation that has been passed on through breeding.

However, this doesn’t seem to cause other health problems, as seen in the Scottish Fold.

Long haired American Curl cats have thick, bushy tails, which have earned them their place on this list.

This highly intelligent breed is a long-haired descendant of the Abyssinian.

They are active, playful, and love to play games with their humans.

The most common color for Somali cats is golden brown, almost verging on ginger.

I can’t help but think of the firefox logo when I see a Somali.

The Birman is a loving, affectionate breed that certainly makes a great family pet.

Birmans can grow to be quite large and have stocky bodies, including a thick, fluffy tail.

These blue-eyed kitties have four white feet. Correspondingly people refer to their white paws as gloves or socks.

Birmans also go by the name “Sacred Cat of Burma.” This relates to the story that they originated in a temple in Asia.

It is said that the sacred temple cats carry a priest’s soul to paradise when they die.

There isn’t much imagination needed to figure out the story behind the LaPerm’s name.

The curls in their fur make it look like this breed has just stepped out of the salon!

These curious cats are into everything and, in many cases, love riding around on the shoulders of their humans.

Their tails look extra thick thanks to their voluminous curly fur, so having a LaPerm on your shoulder on a cold day may be no bad thing!

Also known as the “Aby,” this medium-sized breed is muscular and athletic. Consequently, they have a thick muscular tail too.

They originated in Abyssinia, Ethiopia, and are thought to have been brought to the western world by soldiers returning from the area.

True to their wild looks, Abyssinians are a highly active, curious breed.

They are not lap cats and, although they form a bond with their humans, they also enjoy their independence.

No prizes for guessing where the Scottish Fold breed originated!

The Scottish Fold is well known for having ears that fold to the point of being almost flat.

A random mutation causes the ear fold. This has since been passed on through selective breeding to create the breed.

Despite the cute factor, this ear fold gene is also responsible for other health issues.

The Scottish Fold has a short, thick tail, which is often stiff. The folded ear gene is also the cause of this issue.

The Turkish Van is nicknamed the swimming cat due to its love of water.

Turkish Van cats have a naturally water-resistant coat, which may explain their love of swimming and water.

They have thick, bushy tails with a ringed pattern running along their length.

Squirrel is the first word that pops into my head when I see a Turkish Van cat tail.

These big cats are native to Norway and have long, thick fur that is an evolved adaption for keeping them warm in the cold.

Norwegian Forest Cats may look like they belong in the wilderness, but they are actually gentle giants.

Norwegians are large, muscular cats, so it stands to reason these traits apply to their tail too.

With so much dense, thick fur, these Vikings have tails that appear to be larger than life.

How do cats use their tails?

Your cat’s tail (or cauda) is essentially a continuation of her spine.

While her spinal cord doesn’t continue into her tail, it is still full of nerves that give her feeling and control of her tail.

A cat’s tail has two primary purposes, balance and communication. Let’s explore these both quickly below.

Have you ever watched a cat walk along something narrow like a fence or a railing?

You would have noticed how their tail was working overtime to help them stay standing.

A study looked at how cats use their tails to do just this. They trained cats to walk along a beam.

The researchers could move the beam slightly while they walked, forcing the cats to adjust their balance.

Slow-motion footage showed the cats were moving their tails very quickly to counteract any movement of the beam.

Let’s take a look at some of the common ways your cat uses her tail to communicate.

I’m sure you’ll have seen all of these tail positions before.

When your cat is proudly holding her tail high up in the air, she feels confident and happy.

She is likely to be friendly, and if she quickly twitches her tail in this position, she may be extra excited to see you.

This can mean that your cat is feeling playful. Kitty is ready for some fun.

So drop what you’re doing and break out her favorite diy cat toys.

A low-hanging tail can be a sign of a serious mood or even aggression, so tread carefully if you see your kitty doing this.

Some breeds, like Persians, naturally carry their tails low for no real reason.

Surely the heavier tails out there take a lot of effort to hold up high!

If your cat’s tail is tucked between her legs or under her body, it means something is making her nervous.

It’s a signal of fear and submission, so try to resolve whatever it is that has her worried.

A gently swishing tail will move slowly from one side to another. It is a sign of focus.

So if your cat is doing this with her tail, it may be a sign she is watching something. Prepare for her to pounce!

Fast slapping and whipping of a cat’s tail can warn that she feels scared and or aggressive.

It’s best to avoid approaching her if she is moving her tail in this way.

We’ve all seen it, a cat puffing up like a pufferfish, making her look twice her actual size.

Much like the pufferfish, your cat does this in an attempt to look bigger to scare off any threats.

If you see her doing this, she probably feels threatened or scared.

If your cat wraps her tail around you or another family pet, take it as a good sign.

A human putting their arm around you is a sign of friendship or love. Likewise, your cat is showing you how much she loves you.

Cat breeds with no tail

While we’re on the subject of tails, let’s talk about some of the breeds that get by without one.

These cats are believed to have originated on the Isle of Man, a British Island in the Irish Sea.

Manx cats are generally a tailless breed; however, some do have very stumpy tails.

Their lack of tail is due to a genetic mutation with has led to a hereditary tail-less gene.

Unfortunately, this gene is also responsible for a whole host of other health problems, collectively known as Manx Syndrome.

The Japanese Bobtail isn’t completely tail-less. Instead, they have a rabbit-like tail.

Like the Manx, this is also the result of a genetic mutation that has become hereditary.

Unlike the Manx, this mutation doesn’t cause any other health issues for the Japanese Bobtail.

Other bobtail breeds include the American, Kurilian, and Pixie-bob.

What breed of cat has the longest tail?

The longest cat tail I could find on record belonged to a Maine Coon named Cygnus.

There must be something in the water in Michigan as Cygnus lived with Arcturus, a Savannah Cat who held the record for the tallest cat.

Tragically they both perished in a house fire.

Check out our complete list of Long Tail Cat Breeds for more details about each.

We’ve looked at tail-less cats, the longest tails, and of course, cats with thick tails.

We also had a quick glimpse at how cats use their tails to balance and communicate their mood.

Be they fluffy, muscular, or both; we’ve seen a selection of cat breeds that have some pretty impressive tails.

Our list of 10 breeds is by no means exclusive, and there are lots of other thick-tailed cats out there.

What are your favorite cats with thick tails? Tell me below now.